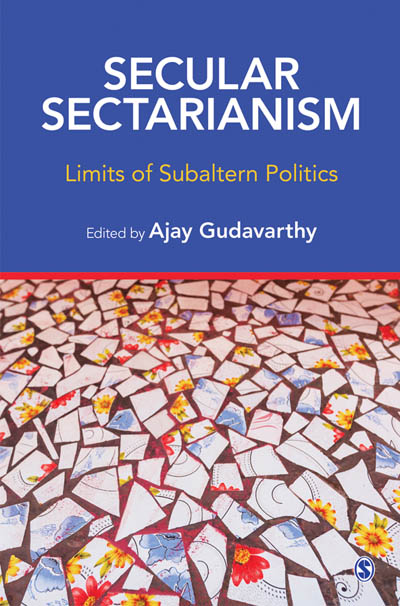 … Secular sectarianism is a specific social condition that allows for incremental mobility for itself while actively arresting the same for social groups that are placed well below them. (Ajay Gudavarthy)

The rise of majoritarian politics has capitalized on existing fissions and rifts within ‘minorities’ or  infighting among various subaltern groups and Ajay Gudavarthy`s new book Secular Sectarianism: Limits of Identity Politics, 2019) rightly addresses this issue of intra-subaltern rivalry to understand the inadequacies or loopholes in existing discourses of subaltern politics. This is indeed a timely intervention as the menacing rise of majoritarian nationalism necessitates a re-look at current forms of identity politics or class based politics which were projected and practiced over the years as the right course of progress. Political outfits of different hues in India have mostly premised their ideological claims on being the vanguard of various disenfranchised sections of our society. Post 1947 subaltern political ideologies rallying around the causes of Dalits, Muslims, Tribals and even class based proletarian politics have occupied major spaces in the Indian political spectrum, asserting their representative claims as the true hallmark of their political credentials. But of late this burgeoning presence of subaltern groups are being questioned as subaltern politics while arguing for its emancipatory optics across the board, is mired in intra-subaltern conflicts, various groups at logger head with each other.

The very idea of the subaltern as a category and subalternity as a discourse, therefore is under the scanner.  There is an impending need, Gudavarthy says, to ‘re-frame the [subaltern] question…’ as subaltern social groups based on caste and religion, and class politics are also structured or inscribed within the same logic of power which they claim to critique. In other words, they and their politics of identity is ‘accrued by the same social structure that also marginalizes them.’ Gudavarthy makes use of two conceptual terms, ‘unequal and ‘uneven’ to argue his point of systems of hierarchies within subalternity or subaltern politics, an issue which they claim to resist but obviously have failed to actualize through their reification of subaltern identity. Their fundamentalist focus on identity has blinded them to emphasize questions of justice and ethicality within their own reflexive restructuring. Put differently, subaltern-politics is ossified or over-glorified to the extent of preempting all forms of auto-critique. Questioning the hegemony of the dominant does not mean the perpetuation of rivalry or ‘unevenness’ within the dominated groups and this is what practitioners of subaltern identity politics forget. They use the secular rubric as an ethical category that promises justice across the board but they retain hostility or unevenness within themselves in the name of identity politics. This is secular sectarianism according to this book which rightly argues that

social power is both uneven and unequal. It is not only gravely unequal when compared to the traditional social elites but also uneven in the very constitution of subaltern social groups. Political mobilization, strategies and the question of agency are split between questioning the unequal and preserving the uneven…Thus, social conflicts in India, mostly, have questioned the hegemony of those above them, much more than empathizing or extending solidarity with those below them in social hierarchy.

Political practices in India, post-1947 was ‘always already’ precariously situated between moving towards a more inclusive secular ethos, and a deeply sectarian marginalization of the ‘other’. Secularism, therefore, as a lofty idea or political principle is not, what is popularly viewed, as mere separation of state and religion but it should essentially refer to a ‘social ethos of the ability to trust the stranger: trust as a social condition for mobility’. In the Indian context, according to Gudavarthy, the “very groups identified as harbingers of ‘secular upsurge’—Dalits, Muslims, women, OBCs and the Left—have initiated a process of sectarian ghettoization. Political alliances did not result in social reform of hierarchies. Reified social hierarchies and expanding political representation are the constitutive conditions of secular sectarianism.” This is an exact analysis of what is happening in India right now as it explains the participation of Dalits and Adivasis in communal riots against Muslims and other minority groups. Reified social groups became the norm of our political practices and such norms have justified expanded political representations through identity group-based politics banking on reified social subjectivity. As a result, subaltern social groups carry the logic of their ‘internal’ social power (they often say this is an internal matter of their specific community that disallows external intervention) into the larger secular–democratic political process. Constitutionalism or constitutional morality in this process are laughed at as impractical liberal ways of looking into politics. According to this book this epistemic normativity has controlled Indian political wisdom for years and ‘much of the liberal and post-colonial scholarship in India suffered from this epistemic limitation and, therefore, by default belonged to the same ‘epistemic community’. Having diagnosed the problem, this book offers new epistemes or a new critical theory of subaltern politics, referring to contemporary critical thinkers such as Nancy Fraser, Judith Butler and Axel Honneth among others.

Nancy Fraser has floated the idea of formulating the question of justice as the possibility of reconciling recognition(identity), redistribution and representation. According to Fraser, the ‘recognition–redistribution dilemma’ posits that ‘recognition requires differentiation, redistribution requires de-differentiation.’ Gudavarthy replicates Fraser`s critique of identitarian model of recognition that ‘instantiates the problems of ‘reification’ and displacement.’ Fraser argues for a deconstructive cultural politics, which she views as the only way to reconcile the politics of ‘recognition’ with redistributive class politics. This sounds really interesting as Fraser`s hypothesis aims to ‘make all identities, historical, fluid, unstable and beyond the limits of binarized signification’. However Gudavarthy is alive to usual critiques of such ‘Western liberal critical theorizations’ and he takes on board the necessary caveat of whether replacement of differences with deconstruction undermines the very specificity of culture itself. While acknowledging the merit of such critiques, this book agrees with Frasers’ view that identity not only reifies but becomes a tool of social elites internal to such group  differences— Muslims, Dalits, traditional Class-politicians amongst others. For Fraser, “essentialization naturalizes historically constituted identities by claiming the identities as those that cannot be breached…This dialectic between naturalization and historicity is significant in understanding how subaltern politics can congeal power to conceal internal exclusions.” This aporia of subaltern  identity politics poses a serious roadblock and Judith Butler offers a way out. Her model of unity not as synthesis but as a mode of sustaining conflict in productive way does have merit according to Ajay Gudavarthy. Butler refers to this as ‘equivalence without becoming each other’, where ‘one social movement comes to find its condition of possibility in another’ and

The introductory chapter of the book reminds us that in the current neoliberal times, while recognition and the accompanying corollary of victimhood have become the new templates of aspirational politics, ‘Hyper-recognition marked by separation, rather than emphasis on shared ethos, holds wider appeal.’ The solution according to this book, is  a ‘turn to common humanity needs an ethical project of self-limiting subjectivity.’

The question that still remains in uneven and unequal social conditions is whether social groups hold the same kind of social power to declare themselves as sovereign selves. Can moral or human equivalence replace unequal material positioning? Would it not be true to argue that the difficulty of imagining deconstructive politics in real concrete also holds true for actualizing the ideal of ‘common humanity’. This also leaves us with the question of the equation between justice and secular sectarianism.

The core argument of the book reflected through the introduction, various chapters and the Afterword on different forms of identity politics in India reiterates that sectarianism is a condition of approaching justice without the idea of inner self and good life and here even the Class politics of the party Left is also not spared because that too is bedeviled by narrow rigidities as it ‘undermined the potency of cross-class agreements and reduced politics to bare materiality, in the process producing a sectarian logic that undermined the very conditions necessary for class-based collectives.’ This book allows productive conversation on existing templates of subaltern politics, its appropriation by right wing political groups and fresh critical insights emerge on possible road maps of reformulating subalternity, something highly in need to counter the onslaughts of political fundamentalism.