Dr. Shanthie Mariet D’Souza is the Founder & President of Mantraya and Dr. Bibhu Prasad Routray is Director of Mantraya. This policy brief is published as part of Mantraya’s ongoing “Fragility, Conflict, and Peace Building” and “Mapping Terror and Insurgent Network” projects. All Mantraya publications are peer reviewed.

Article republished by permission of http://mantraya.org

The Sahel region in Western Africa is witnessing a massive surge in terrorist attacks. Three countries- Mali, Niger and Burkina Faso- reported 4000 deaths in 2019 and the trend of staggering casualties in attacks by al Qaeda and Islamic State-linked outfits continues in 2020. The governments and militaries of the affected states are ill prepared to deal with the upscale in violence. With the United States of America considering pulling out its troops, 5000 French troops may not be able to contain the Jihadist wave in general and the resurgence of the Islamic State in particular, which may engulf the entire Sahel region causing deaths and producing thousands of IDPs.

On 1 February 2020, unidentified heavily armed men on motorbikes arrived in Lamdamol village in Seno province of Burkina Faso, north of the capital Ouagadougou and massacred 20 civilians.[1] The attack took place a week after a similar carnage in the province of Soum. Suspected Islamist terrorists had rounded up the villagers, executed the men and asked the women to leave the village. In early January, 36 people had been massacred at two villages in the northern Sanmatenga province. Jihadists also kidnapped and killed a Canadian mine worker and abducted two other humanitarian workers in December 2019. These incidents are the latest in a series of attacks that have taken place in this West African nation. A day before the 27 January attack, the prime minister of Burkina Faso and cabinet had resigned taking responsibility for the slide in security situation. 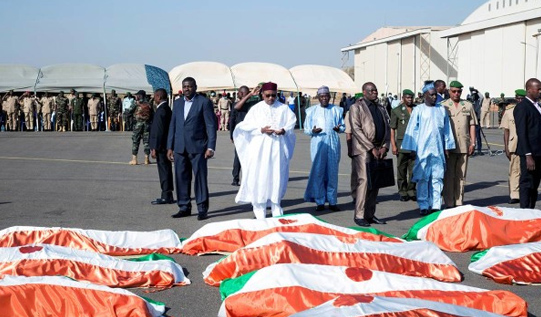 Flag draped body of soldiers killed during a Jihadist attack in display
in Niger in December 2019. Image Courtesy: Global News

Along with Burkina Faso, other West African nations such as Mali and Niger have experienced a significant surge in terrorist attacks in recent months. On 26 January, 20 gendarmes, or paramilitary police officers were killed in central Mali in an attack by Jamaat Nusrat al-Islam wal-Muslimin (JNIM) – an umbrella group of al Qaeda affiliates. On 9 January, at least 89 soldiers were killed in a jihadist attack on the Chinagodrar base military camp in Niger along the western border with Mali. More than 60 militants were also reportedly killed when the army responded backed by French air strikes. In December, another 71 soldiers were killed in an ambush claimed by an affiliate of the Islamic State group in the region. Especially with regard to the attacks on the security forces, the militants appear to work on a twin objective strategy: one, to break the morale of the forces and second, to steal their weapons and equipment.

According to the United Nations, over 4000 people were killed in 2019 in extremist attacks, making Sahel one of the most violent regions across the world affected by Islamist extremism. In comparison, three years earlier, only 770 deaths were reported from the region. According to a recent briefing at the United Nations Security Council, the geographic focus of terrorist attacks has shifted eastwards from Mali to Burkina Faso and is increasingly threatening West African coastal states.

These insurgent groups have adopted the branding of international terrorist organizations like the Islamic State and al Qaeda. However, their focus remains local. They thrive in areas bereft of governance exploiting local conflicts. Islamist ideology is used by the groups to bridge different ethnic groups, convincing them to fight for Islam rather than over smaller tribal conflicts.[2] 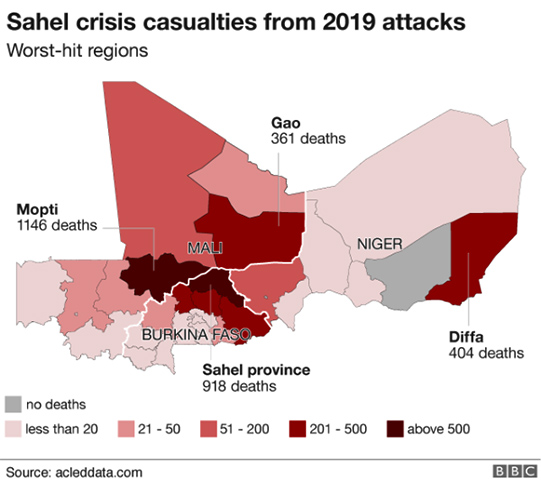 Most of these groups trace their roots to the Algerian civil war that began in the early 1990s and spanned a decade. Islamist fighters from Algeria fled the country, seeking refuge in the deserted areas of northern Mali. Violence began in 2012, when a political crisis in Mali sparked a rebellion by ethnic-based movements and jihadist groups in the north of the country. The uprising was eventually quashed and the territory seized by jihadists was reclaimed by French forces. But these groups and the ideology they support was far from defeated. For a while, militant violence was confined mostly within Mali’s borders, but violence is increasingly spilling across borders.

Though once considered resistant to the phenomenon of Islamic extremism, Burkina Faso has suffered a rapid rise in Islamist extremism in recent years. The number of deaths has risen from about 80 in 2016 to more than 1800 in 2019. Half a million people are currently displaced and continuous attacks are forcing thousands more to flee their homes.

In recent months, Islamist groups, some with links to the Islamic State and al Qaeda, have been waging larger, more sophisticated attacks and are expanding into new territory. Al Qaeda, weakened in many parts of the world, has strong branches in both East and West Africa. The al Qaeda linked JNIM is still the most dominant jihadist actor inside Mali and large parts of Burkina Faso and Niger. In addition, recent Islamic State attacks in the region have demonstrated its growing capabilities. In January, AQ released a two-page statement praising the jihadists in Mali and Somalia. The Islamic State, on the other hand, has released photographs and videos claiming responsibility for the attacks in Niger.

Rising extreme inequality, despite impressive economic growth in the past two decades, feeds insurgencies in the region.  Nearly 70 per cent of West Africa’s population depends on agriculture and livestock for a living. That way of life continues to be threatened by persistent droughts. As a result, a lot of young men have found a career in terrorism. The combination of poverty, weak state presence and under-resourced armies has allowed jihadist groups, criminal networks and ethnic armed groups to thrive in the region, despite regional and international efforts.

In February 2020, the JNIM released three sets of photos highlighting its recruitment campaign titled, “Go forth in the cause of Allah”, Image Source: Twitter

A seven-year campaign led by French troops starting 2012, deployment of hundreds of U.S. special forces, massive aid for local militaries and a billion dollar-a-year United Nations peacekeeping operation have been unable to decisively weaken the multiple overlapping insurgencies in the region.

In 2014, leaders of Niger, Burkina Faso, Mali, Mauritania and Chad created the G5 Sahel group, a French-backed taskforce of 5000 personnel to fight the militants. However, that clearly has failed to deliver. The reason is to do with their extremely small size which makes their mandate to police over a very large region extremely difficult to execute. Moreover, the military response to the upscaled terrorist attack is clearly falling short due to a variety of reasons including availability of resources. Burkina Faso’s meagre 6000 Army personnel are ill-equipped and poorly trained to deal with assaults that usually involve hundreds of highly mobile, lightly-armed militants travelling on motorbikes or in pickup trucks. In response, the government is considering developing a people’s militia by providing weapons to civilians above the age of 18. The BBC reported that members of Burkina Faso’s parliament have ‘unanimously voted in favour of arming civilians in a move they said would help combat the armed groups. It is due to be signed into law.’[3] It is difficult to foresee how these civilians supposed to be trained for 14 days will be able to put up a better resistance than the professional military.

Niger’s President Mahamadou Issoufou has reorganized the leadership of military in order to reformulate its strategy.[4] The new military leadership has also announced a new offensive to begin against the Islamic State in the region, though it is unclear when or how it will progress. Past offensives have so far failed to stymie the spread of jihadist violence. Mali’s prime minister Ibrahim Boubacar Keita has announced plans to increase the numbers of its army by 50 percent (10,000 soldiers) this year.[5] At the same time, he wishes to hold negotiation with the Jihadists.[6] It is not clear how much would the exercise of increasing the size of the military cost and if Mali would be able to bear the expenses alone. Frequent attacks on the soldiers in the West African nations by the Jihadists as a tactic to deter young men from joining the army could also pose problems for new recruitment by the government.

The present spate of violence appears to take place as the Islamic State affords more attention to its growing branch in Sahel. In 2019, the Islamic State’s central leadership renamed its ‘Islamic State in the Greater Sahara’ wilayat (province) into ‘West Africa Province’. This adds to the specter of violence in the region where the al Qaeda affiliated groups such as the JNIM are almost enjoying a free run and are expanding fast.

Amid concerns that domestic or regional response may not be sufficient, there are additional reasons to worry. The U.S. plans to withdraw a significant proportion of its troops deployed in Africa. The U.S. currently has 6,000 military personnel in Africa, though only several hundred are deployed against militants in the Sahel. A Pentagon proposal revealed that the U.S. is weighing the option of military cuts in Africa. The US decision is necessitated as it redirects resources to address challenges from China and Russia after two decades focused on counter-terrorism operations.

Apart from 14000 UN peacekeeping forces in northern Mali, France has 4500 troops in Mali who are dependent on logistical as well as intelligence inputs from the U.S., which also maintains a drone base in Agadez town in Niger from where it launches air operations. France announced in January that it would deploy 600 additional troops to the region, despite rising anti-French sentiment in some countries[7] and criticism at home that its forces are bogged down. The move came after President Emmanuel Macron sought support for the French military from the G5 countries and threatened to withdraw his forces in its absence.[8] This token increase, however, is unlikely to make much impact on the ground.

Violence in the coming months, therefore, could spread even farther south and destabilize the region. It can possibly spillover into the northern part of Guinea, Benin, Togo, Ghana and the Ivory Coast.  Sahel indeed could be close to a tipping point that could see an irreversible slide into violent chaos that will strengthen extremist groups and send a new wave of migrants to Europe.

[7] In January 2020, hundreds of people gathered in Mali’s capital, Bamako, to protest against the presence of foreign troops. They carried posters reading: “Down with France, Barkhane must leave” and “France is a brake on our development”. “Anger in Mali over France – G5 summit in Pau”, Africa News, 14 January 2020, https://www.africanews.com/2020/01/14/anger-in-mali-over-france-s-pau-summit//. Accessed on 11 February 2020.