Dr. Namrata Goswami is an independent strategic analyst, author and consultant on space policy, great power politics, and ethnic conflicts.  After earning her Ph.D. in international relations, she served for nearly a decade as Research Fellow at India’s Ministry of Defence (MOD) sponsored think tank, the Institute for Defence Studies and Analyses (IDSA), New Delhi, working on ethnic conflicts in India’s Northeast, counter-terrorism and China-India border conflict.  Her research and expertise generated opportunities for collaborations abroad, and she accepted visiting fellowships at the Peace Research Institute, Oslo, Norway; the La Trobe University, Melbourne, Australia; and the University of Heidelberg, Germany.  In 2012, she was selected to serve as a Jennings-Randolph Senior Fellow at the United States Institute of Peace (USIP), Washington D.C. where she studied India-China border issues, and was awarded a Fulbright-Nehru Senior Fellowship that same year. Shortly after establishing her own strategy and policy consultancy in 2016 after relocating to the U.S., she won the prestigious MINERVA grant awarded by the Office of the U.S. Secretary of Defense (OSD) to study great power competition in the grey zone of outer space. In 2017, she was awarded a contract with Joint Special Forces University (JSOU) to write a monograph on ISIS in Asia. The monograph has since been published and can be found here: https://jsou.libguides.com/c.php?g=83714&p=5622417

In April 2019, Dr. Goswami testified before the U.S-China Economic and Security Review Commission on China’s space program. With expertise in international relations, ethnic conflicts, counter insurgency, wargaming, scenario building, and conflict resolution, she has been asked to consult for audiences across the globe, from academia to policy-makers. She was the first representative from South Asia chosen to participate in the George C. Marshall European Center for Security Studies NATO Partnership for Peace Consortium (PfPC) ‘Emerging Security Challenges Working Group.’  She also received the Executive Leadership Certificate sponsored by the Harvard Kennedy School of Government, National Defense University (NDU), and the Asia Pacific Center for Security Studies (APCSS). Currently, she is working on a book on “Great Power Space Resource Ambitions in Outer-Space” to be published by Lexington Press, an imprint of Rowman and Littlefield.

The Naga Ethnic Movement for a Separate Homeland is available at https://originindia.oup.com/product/the-naga-ethnic-movement-for-a-separate-homeland-9780190121174 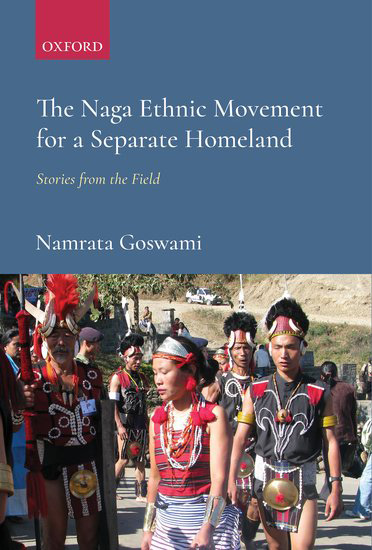 My venture into understanding the Naga ethnic movement for a separate homeland in Northeast India started in an official capacity in April of 2006 when I joined as Associate Fellow, the Institute for Defence Studies and Analyses (IDSA) in New Delhi. This was a year after I completed my doctorate from Jawaharlal Nehru University.

While my doctoral work was on international relations, norms and conflict framing, a version of which is now published,[1]

I had a special interest in Northeast India due to the fact that my family is from Assam. I grew up in Haflong, Assam, and spent part of my teenage years in Diphupar, in Nagaland. I credit my father, Tarun Chandra Goswami for his pioneering work on ethnic folklore and tradition,[2] that gave me access to understanding the context of ethnic societies and cultures, from a very young age. I travelled and trekked to remote villages with him, as he collected data on music and folklore, and watched him work. That memory lingered long after he was gone (1999) and is part of my inspiration for my decade long research work on the Northeast, specifically the Naga ethnic conflict.

Throughout those years of research (2006-2019), I had to first acquaint myself with the literature on these conflicts, dig deep into my own formative years, and connect to several communities via field work. During my work on the field (2007-2015), sometimes traveling to very remote areas, I realized how difficult it is for a women researcher to conduct such field work. In one instance, members of a local armed group got into my taxi without my permission in a remote area, close to the India-Burma border, and took our taxi to an unknown location. It was a tense field experience for me (though no harm came to me or the driver), and I ended up discussing the local conflict as well as my father’s ethnographic work with the group’s leader. Despite such experiences, I stuck to my gut instinct, to think, travel, collect field data and write on this area, and henceforth, this book materialized: my lifework.

What is the Book About?

The Naga Ethnic Movement for a Separate Homeland Stories from the Field published by Oxford University Press, 2020 is a unique book in the sense that it is a book of narratives; it tells stories and offers insights on the group situation. This book reflects my conversations with local communities, armed groups, Indian security personnel, civil servants, local politicians, children, who live in these conflict zones. The Naga Ethnic Movement for a Separate Homeland offers readers a journey into the historicity of the Naga conflict. It identifies key local context; moments that resulted in an armed movement led by A Z Phizo. The experience of the Nagas in the European battlefield during the First World War, the local context of the Second World War, where Naga areas, especially Kohima played a decisive role in ensuring allied victory in the famous Battle of Kohima (1944), designated the greatest of British battles during World War II by the National Army Museum;[3] Phizo’s participation with the Indian National Army led by Subhas Chandra Bose,[4] all played a part in the development of a Naga ethnic movement. I dwell in the book, on the difference of leaderships and ideologies between members of the Naga National Council (NNC) that led to separation and new groups emerging like the National Socialist Council of Nagaland. As a reader, you will travel with me to villages in Arunachal Pradesh, Assam, Manipur, and Nagaland, and get to read stories of local communities affected by this decades old conflict.

I offer perspectives on the lives of Naga armed group leaders like Muivah, the late Swu and the late S.S. Khaplang, as well as the founder of the movement, Phizo. The book explores their discourses on the conflict, and examines the decades long engagement to find a peaceful resolution with the Union government. Ceasefires were signed between the Union Government and the NSCN led by Muivah and Swu and the NSCN led by S S Khaplang, between 1997 and 2001, though the cease-fire between the NSCN-Khaplang was abrogated in 2015. This was followed by violent attacks by the group on an Indian army convoy in Manipur.

I reflect on historical events like the entry of the British into the Naga hills in 1832 and what that signifies; and the impact on Naga folk memory of the fierce battle of Khonoma against British expansion into their homeland in 1879. Fast forward a hundred years or so, the book offers an analysis of events like Oinam and Operation Bluebird (1987) and their lasting impact on Naga societal memory. More importantly, the book offers deep insight into what it is like to grow up in a remote village in a conflict affected area; the perspective of the young men and women, who live the conflict, participate in the local discourse, and some go on to join the rebel groups. What are their lives like? What do they aspire for? What effect does the overarching discourse of the Naga ethnic movement, that most of them are born into, have on their process of identity formation in a framework of ‘us versus them’.

The reader will travel with me to Burma, across the India-Burma border, and hear the perspectives of the Naga inhabited areas in the Naga Self-Administered Zone (NSAZ). The book deals squarely with the connection of the ethnic group to land. The issue of territoriality that animates the conflict is discussed: be it a separate homeland, an autonomous zone, or a unified homeland across several states and the resistance to that idea.

At the time of writing the book and its publication (January 2020), the Naga ethnic conflict was at a final stage of resolution guided by the spirit of Isak Chisi Swu and the Naga Framework Agreement signed in August 2015. As is wise, the Naga peace talks were widened in 2017, to include groups besides the NSCN (IM), functioning under a Working Committee of the Naga National Political Groups (NNPGs). Groups included were the four different representations from the NNC – Federal Government of Nagaland (FGN), NNC-Parent Body, Non-Accordist faction of NNC/National People’s Government of Nagaland (NPGN/NNC-NA), and Government Democratic Republic of Nagaland /NNC-NA (GDRN), the NSCN–Neokpao-Kitovi (NSCN-NK), Khango Konyak  led NSCN-Khaplang (NSCN-K) and NSCN-Reformation, (NSCN-R). Nagaland Chief Minister, Neiphiu Rio announced on February 10, 2020 that

We are at a crucial juncture in our history, because during such times, insecurity may prevail in the minds of people, or misconceptions and confusions based on hearsay may be spread by mischief-makers …nowhere has it been mentioned that the peace process has concluded. Only the talks have concluded on a positive note, which signifies that the negotiating parties have arrived at meeting points on the various topics of the negotiations… Negotiations had been going on for the last 22 years and the talks had to be concluded so that an agreement can come about. No pact can be signed unless the points of contention are hammered out between the parties involved.[5]

R.N. Ravi, the Governor of Nagaland, as well as the Naga peace interlocuter indicated that talks have concluded, and hoped everyone support the final resolution. Sticky issues are the demand for unification of Naga inhabited territories, a separate flag, and a Naga constitution. More importantly, are all armed factions on board, with the NSCN (IM) playing a lead role? We do not want a repeat of past agreements like the Shillong Accord of 1975 that divided the NNC, and created the seeds for decades of continuing armed conflict. This situation of violence in the midst of societies is detrimental for long term health and survival. The peace agreement has to be durable. This perspective is well understood and internalized by Niketu Iralu, who has worked tirelessly to bring a peaceful resolution to a violent conflict by building consensus through his Forum for Naga Reconciliation (FNR). This is what he has to say:

Nagas are tired and in a stupor and if violence breaks out we may say, ‘What to do its come again’. But this time we must say no to any violence. Ordinary people have just suffered and accepted things in despair and dismay but with deep bitterness.[6]

A final resolution should dawn upon us soon. My hope is that this book helps the reader, navigate the Naga conflict and offer insights from the field.