José Truda Palazzo Jr is an environmental activist, writer and explorer who has dedicated himself to the environmental cause continuously for almost forty years. In the 1970´s, when Brazil was still under a military dictatorship, he became one of Brazil’s leading voices against Japanese whaling in its waters and led a research and conservation project which ensured the recovery of a breeding population of Southern Right Whales in Southern Brazil. Currently he serves as member of the International Committee on Marine Mammals and Protected Areas and in the IUCN Marine Mammals and Protected Areas Task Force and Tourism and Protected Areas Specialists Group. He is also an elected Life Member of the Australian Conservation Foundation and continuously participates in international campaigning for conservation initiatives in Australia, especially related to the marine environment and cofounded Divers for Sharks, now a 160,000+ strong international campaign working to halt the global decline of shark populations and restrict international trade in shark fins. He is a keen diver with dives logged around the world but especially in his beloved Yap, Micronesia where he acts as Global Ambassador in promoting Yap’s unique natural and cultural heritage. 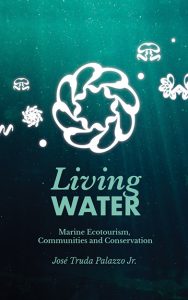 It has taken some thirty eight hours of travel from southern Brazil, five flights and six airports to be here, underwater, lying low kneeling on the white sand of this lagoon channel behind a coral head, waiting, just waiting, while the compressed air in my tank drains slowly through my anxious breathing. It is hardly 9 AM, and I arrived at this faraway island in the middle of the violet-blue of the Western Pacific barely five hours ago. It doesn’t matter­­; as soon as the first resident celebrity arrives, all travel hassles and, in fact, your entire life beyond the water surface which is visible above you simply fades away.

She comes with the family, it seems. First one, then three, then seven reef manta rays pass by just a few metres from me, my wife and the other half dozen divers who have come from all corners of the world to see them, for in Yap, one of the many islands in the Federated States of Micronesia, the 100+ resident manta rays are a daily sight to mesmerised visitors, all year round.

It was 2007, and my family has been back to Yap several times since then, attracted not only by the mantas, but also by the pristine reefs, incredible marine biodiversity, and some of the kindest people on Earth living in a place where mass tourism hasn’t ruined both culture and nature. In fact, Yap thrives on being protective of its natural and cultural heritage. Up to 8,000 visitors per year make the (sometimes gruelling) air journey to enjoy it, leaving behind dollars, jobs, and prosperity for many.

In my forty-three years as an environmental activist, twenty two of these as an avid diver, I discovered that many places around the world have thrived on the protection of their marine heritage, through the development of their non-extractive use for income generation at the local level, defying the global trend—sadly and irresponsibly set by some of the most developed nations on the planet and their heavily subsidised fishing fleets—of mining the living resources of our shared oceans as if there was no tomorrow. Recreational diving, whale, dolphin, seabird, dugong and manatee watching, and mangrove exploring, all gave rise to a myriad of opportunities to generate quality jobs and income for coastal communities and, in many cases, to replace unsustainable extractive uses which were until recent times the last resort of local people left to their own devices by uncaring governments and a faceless, soulless global consumptive market imperative.

Living Water is an attempt to highlight and discuss some of the most striking examples of how Marine Ecotourism, or the non-consumptive use of marine wildlife and environments, can benefit both local people, economies and the environment itself, by providing much better alternatives for communities than ‘business-as-usual’ destroying species after species to simply make a living in a harsh world.

But it is also a warning on how this amazing potential for good is being hampered or maligned by, first, neglect in developing adequate recognition and protection of these activities and their stakeholders at appropriate public policy fora—especially most Multilateral Environmental Agreements, where extractive use lobbies prevail—and a relentless barrage of attacks by the scientific establishment and even sectors of the environment and ‘traditional community’ movements on the perceived ‘impact’ of these activities which, as we shall see, oftentimes are anything but, regardless of sensationalistic headlines and published paper titles to the contrary.

Marine Ecotourism, I dare conclude after my inquiries, is a major force for good, and should be promoted, not unduly restricted under prejudiced views devoid of evidence on its ‘impact’. There seems to be a definite difficulty, on the part of certain sectors of academia and government bureaucracies, to acknowledge and apply concepts such as cost-benefit and limits of acceptable change to their analyses, and Marine Ecotourism is often treated by scientists and policymakers as if existing in a void, without any actual consideration given to what would happen to the species and ecosystems being visited if there was no income generated from watching—not eating—them.

Of course, all tourism, and in fact all human uses of nature, must be sustainable, and all bona fide research which investigates these actual impacts and provides guidance to avoid or mitigate them should always be welcomed and incorporated into management decisions. But by not paying attention to the actual conclusions (or lack thereof) of many papers supposedly addressing ‘tourism impacts’ and giving too much weight to sensationalistic titles and press releases, we are treating the Tourism sector with much more harshness than the possible predatory alternatives to it. It is time we openly talk about, and correct, this distortion.

Non-extractive use stakeholders, from local business owners to divers and whale watchers, must be heard at local, national and international levels, for engaging in decision-making and dispensing regulations, guidelines and funding related to the use and stewardship of our shared marine heritage.

As I write these lines, while my beloved Yap and its mantas populate my mind, just a few hundred metres offshore from Praia do Forte beach where I currently live, the humpback whales that breed in Brazil are nursing their calves in the warm waters off Bahia State, and the first sea turtles that nest here are arriving. They are all, now, a blessing for the people living in this region, as not so long ago they were slaughtered for a meagre gain. I wish to invite readers to travel with me on this extraordinary journey, which might help set the course for healing our oceans while providing for the needs of millions of coastal people around the world. But for that to bear fruit in many more places, we will need everyone on board. We need you.

We need a less academic, proactive, local-based approach to acknowledge non-extractive uses and promote their benefits and sustainability.

Living Water is a call to arms for change, so that Marine Ecotourism can fulfil its promise even better and wider.