Donna is the author of eco-memoir, Wild Roots: Coming Alive in the French Amazon, written from her home in French Guiana where she worked from a platform high in the rainforest canopy. A nature enthusiast, excerpts from her books, along with several other works, have been published in various newspapers, magazines and online publications. When not tending to her food forest, Donna can be found reading from her sea kayak or hurtling along one of the world’s wild rivers in a sprint canoe.

Excerpt: Shock and Awe: The Global Assault on Wildlife and Where to find Hope by Margi Prideaux and Donna Mulvenna

Two authors traverse the wildlife conservation landscape from their two unique perspectives—one as a seasoned activist, academic and negotiator, and the other with eyes opened to nature by a deep connection born in the Amazon. Told through the lens of the seven deadly sins, Shock and Awe stimulates thinking and offers hope. 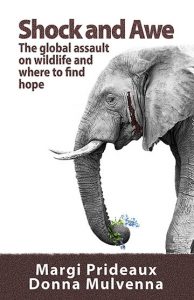 As an urban-raised person, I lacked even a vague concept of the navigation skills of my ancestors, or those of indigenous people who have not abandoned this skill, which made it more foolish to set off on a journey into one of French Guiana’s Nature Reserves without a GPS.

The Matoury Nature Reserve rises more than two hundred metres above the city of Cayenne and is covered in thick primal forest—protected as a reserve since 2006—and made more interesting because it rests at the biogeographical intersection of Amazonia and the Guiana Shield. From the deck of my home, on a hillside that overlooks the valley that borders the park, my eyes had often been drawn to the crown of one particular tree—the princess of the forest; a tabebuia serratifolia. I thought to myself, ‘If I still live here in the dry season, I’m going to visit that tree.’

When I first arrived in French Amazonia, I wouldn’t have dreamed of trekking alone through the jungle. I was too fearful of jaguars slinking through dense vegetation or bullet ants transmitting poison directly into my nervous system. But that was before I stood on top of a rocky outcrop deep in the rainforest and Awe—the dense concentration of all life—moved me physically and spiritually.

My body first sensed the force which caused blood to skyrocket through my veins. It was an intense emotion that blew open the door to all the sadness, bias, and untruth in my mind, gathered them together in a mounting pressure that built up and up in my chest until, as a swelling river bursts its levee bank, spilled from me in a flood of tears. In that moment, my world was changed from cynical matte to one full of sparkling possibility. My thoughts, never one’s to be left on the back burner, struggled to catch up. What was this feeling that made me feel so strong and brave, I thought I could ride through the rainforest on the back of a jaguar, and walk away? Nothing could move fast enough, loud enough, or bright enough to stop the thrill under my skin: a raw and wild emotion that I felt inherently belonged to me.

Being struck by Awe is a humbling experience. You know it is logically true that Nature doesn’t care whether you are part of her surroundings or not, but your mind is opening like a flower, the air is pulsating, and you are pulled into abyss of a tangible energy. Once you have experienced it, it is impossible not to want to jump up and down and shout about it.

What happened to me that day not only changed my view of the world, it changed my belief and understanding of spirituality. It was a pivotal moment that I have thought about, in detail, for the years since.

Following the Awe experience, my mind—which had previously jumped around all over the place—quieted, and all the guilt, inadequacy, and tension I had accumulated over the years, evaporated. The change was so profound and so restorative, I made a vow never to lose my self again and to routinely spend time in a place more likely to elicit feelings of Awe: Nature.

Rocket fuel is how poet Lang Leav skilfully illustrates the riot of emotions that epitomises my personal experience of awe:

‘She has been feeling it for a while now—that sense of awakening. There is a gentle rage simmering inside her, and it is getting stronger by the day. She will hold it close to her—she will nurture it and let it grow. She won’t let anyone take it away from her. It is her rocket fuel and finally, she is going places. She can feel it down to her very core—this is her time. She will not only climb mountains—she will move them too.’

My discovery of Awe was a rediscovery, as the great pioneer in the application of Awe-based consciousness Kirk Schneider points out. He suggests fundamental Awe resides in all of us from the time we are born, throughout our childhood and every night we fall asleep and dream of greater things:

‘We as human beings experience the world (cosmos, being) as overwhelming, from the moment we are aware, we become aware of our meagerness. From the moment we reflect on ourselves and the world, we sense how hopeless, helpless, and vulnerable we are. And yet, close on the heels of this shuddering despair of ours is a riveting sense of possibility about our lot. As much as we are apart from that which surrounds us, we are also a part of it, partners to it. We are thrilled, enthralled, and exalted by our condition as much as it perplexes and overpowers us. If life is an open sea within which we may drown, then it is also a yielding sea within which we may meld and merge.’

A diligent student of horticulture, I had for years buried my head in textbooks about dichotomous keys, compound leaves and symbiosis. Then, believing I knew everything about trees, I chose a speciality; tropical fruit trees. But in my studies, I had overlooked everything of which I did not know: trees are sentient divine beings.

The morning of my tree-finding expedition was hot and humid: hot sun scorching my neck and that stifling dense stickiness that precedes heavy rain. I was dressed in a wide-brimmed hat and long boots, long trousers and a long-sleeved shirt; the only thing missing was the pin cushion and a butterfly net. Although the forest noises I found fascinating closer to home turned threatening the deeper I entered the forest,—monkeys shaking branches to ward off my presence and reptiles slithering in a decomposing world under foot—I believed the jungle and I stood on a more equal footing: I hadn’t recently needed an urgent dose of antihistamines and my earlier paranoia of the unknown had given way to curiosity. But a seed of fear had wormed its way into my mind, and for a moment I did weigh up whether to turn back or do as Henry Walter Bates did; proceed as a ‘tolerant, curious, uncomplaining traveller’.

After an hour more of scrambling over turtle vines and checking my boots for scorpions—during which I chanted the need to slow down and be in the moment—I pushed through a dense patch of scrub into a clearing of old ground that had been opened up to see light again: broken limbs; stranded vines; crushed vegetation; and an uprooted forest giant that had seemingly buckled under the weight of hundreds of waterlogged tank bromeliads. Turning in a wide arc, I assessed the damage, then peered through the tree gap to behold a blue sky… that had been replaced by a crown of golden flowers. I was awestruck.

The tree, which I had unscientifically nicknamed Coeden, because I thought her other name of pau d’arco drew too much attention to her inhouse medicine chest, towered thirty metres overhead. The canopy, naked of leaves, was a mass of trumpet-shaped flowers—each one a gold star pinned against a sky-blue background. Coeden stood apart from the other trees, seemingly to preserve her hierarchical space, but I strode straight up to her and put my arms around her waist. I filled the relative silence with my own language; said hello and thanked her for her showy flowers. Then I flattened my ear against her smooth trunk, as elephants do, and listened for her voice; buds forming, sap flowing, and leaves rustling.

Later, knelt in the wet mulch at Coeden’s base, I watched leafcutter ants march in a perfectly straight line across the decaying floral swamp while I picked up fresh flowers to thread a daisy chain. When sitting at the base of a great tree, it is clear that trees are more than just trees. They have a memory, which speaks of people, history and place; a chemical energy so animal life can grow, and a host of mysterious we can only hope to understand. Peter Wohlleben, a professional forester and the author of, A Hidden Life of Trees, has self-admittedly exclaimed that he knows, ‘as much about the hidden life of trees as a butcher knows about the emotional life of animals.’

We do not know how trees see, feel or calculate time: how an ancient tree cut down centuries before can live without leaves for photosynthesis, nor how trees know that jumping the gun in spring can be catastrophic in cold weather. Experiencing the whole energy of life, strips us to our basic humanity so we not only understand nature is important; we feel it too. Modern life is not our ruler: it is an agglomeration of people isolated from nature, who without that inner compass turn away from their best; eroding traits such as kindness, compassion and humility.

Although it had taken me three hours to find Coeden, the reality was the journey had taken decades. I needed to wait for life events to change me, and for my perception to change towards other living beings before I could be more open to this type of spirituality: a blurring of the boundaries between the usual ‘self’ and the surrounding environment.

Dusting myself off, I stood and embraced Coeden. Earlier in my working life, I had often heard, ‘There is no place for tree huggers here’. That bias has largely vanished today, as activists, conservationists, and ecologists stand as part of a crowd. Although the desire to form a bond with nature—a tree—can be difficult to articulate, hugging a tree doesn’t need to meet a purpose other than it just feels good. It is important we know the objects of our affection—their distinct identity, habitat and biodiversity—so we are more likely to protect them.

I laid the daisy chain over a waist-high sapling and turned to leave. A gentle gust of wind heightened the rhythm of the forest and a shower of golden flowers rained down on me: nature’s outpouring of grace.

Hergenhahn, BR. 2013. An Introduction to the History of Psychology; 7 edition

Jericho, G. 2019. Parliamentarians deserve our wrath for 30 years of inaction, not climate protesters. The Guardian. https://www.theguardian.com/business/grogonomics/2019/oct/12/parliamentarians-deserve-our-wrath-for-30-years-of-inaction-not-climate-protesters

Koch, T. 2019. Annastacia Palaszczuk is cracking down on protesters – she is likely correct about public sentiment. The Guardian. https://www.theguardian.com/commentisfree/2019/oct/18/annastacia-palaszczuk-is-cracking-down-on-protesters-she-is-likely-correct-about-public-sentiment

Lang L. 2016. The Universe of Us, Andrews McMeel Publishing

Wohlleben, P., 2016. The Hidden Life of Trees, What They Feel, How They Communicate—Discoveries from A Secret World, Greystone Books