Professor Farhat Basir Khan is a distinguished academician, a communication strategist, media practitioner and an innovator with several new media techniques and formats to his credit. He is the senior most faculty member of Asia’s premiere mass communication institute, the AJK Mass Communication Research Centre and has served on several prestigious positions in AJK MCRC including the Maulana Abdul Kalam Azad Chair Professor, Professor of Media and Communication and outside as Founder Director and Professor of the Academy for Photographic Excellence. In addition to leading several productions, researches, advocacy campaigns, Prof. Khan is a true champion of a Digital India. He has also made remarkable efforts in capacity building, media and digital literacy and sensitization.

Moreover, Professor Khan champions the use of communication for development and is known to have curated several exhibitions on Mental Health, Votography for sensitization of youth for democratic participation, preventing violence against women besides several others. In the past, he has worked for the Multistakeholder advisory group of the India -Internet Governance initiative, where he supported to expand the national and cyber security dialogue to include the marginalized communities, minorities and underrepresented stakeholder groups. Also has the unique distinction of producing the fifty-year commemorative audio-visual for UNICEF India, as well as for World Health Organization, which was part of their main celebration events Currently, he also serves on the board of editors of Journal of Scientific Temper of CSIR, department of science and technology, Government of India. 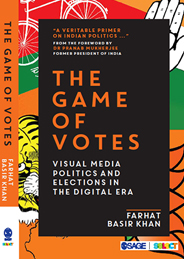 The Game of Votes has something for everyone. It whets the appetite of journalists, people interested in Indian politics and history as well as the wary watcher of the growing stranglehold of social media over politics, society and media. The book takes you on a roller-coaster ride through the din of Indian elections, the art of forging political alliances, the overwhelming influence of social media companies in global politics, the menace of fake news and the worldwide rise of right wing politics.

Commending this timely and incisive book by Prof. Khan, the foreword, written by Former President and Congress leader Pranab Mukherjee, says: “The book looks at the role of technology platforms, micro-profiling voters, clash of personalities and the rise of the ‘national champion’—all of which have been dealt with in detail. It is both empowering and liberating when a communication expert, who is also a renowned teacher, uses original research to unravel the various threads of what makes for a modern-day Indian election.”

The timing of the book and its vast expanse is both is interesting and important. It comes at a time when people the world over are intrigued with BJP stalwart Narendra Modi’s homecoming as the Indian Prime Minister for the second time. His first time was predicted with a massive visible youth wave, but his second run with a bigger mandate was a surprise to many and a shock to a few, considering widespread chaos over demonetisation, confusion over GST and rise in communal politics. This unpredictable rise of brand Modi, his inexplicable persona, style of politics and vote-conversion abilities are contrasted with the losing sheen of the Nehru-Gandhi dynasty, loss of confidence in the Congress, failure to launch of the Gandhi scion and electoral reverses for the party in an increasingly turbulent yet ambitious Indian nation.

Using a carefully though through strategy, Team Modi has emerged as a party which has emerged as most wired and connected with the ambitions, goals and dreams of the country. It also speaks to the questions of growing ambition of the Indian middle class and the desire for enhanced pariticaption in governance. September 15th each year is celebrated as the International Day of Democracy by the UN, calling for ‘participation’ as the central theme this year the UN, put the issues of democracies front and centre, where taking a democracy from being merely representative to a truly participatory one is key. The book Game of Votes is therefore an important read, as it highlights the very quality and nature of an entire paradigm shift which India, has experienced as the world’s largest democracy. This is by far one of the most critical book to have been written on elections tracing Indian elections from the heady post-Independence Nehruvian era to the frenzied Modi victory of 2019, this book tells a compelling story of how India become the world’s largest and most vibrant democracy. The book traces the changing political and media landscape beginning with the tepid elections of the fifties to the feverish social media driven elections of the 21st century. Politics has always been a topic dear to the Indian heart and this book will revive the historical memories of long-forgotten politicians, scintillating slogans and shrewd electoral discourses that moulded the land and its people.

Media and marketing pundits were aware that the elephant in the room – Facebook – will have an impact on the 2019 Lok Sabha elections. How deep will it be and what impact will it have was a question mark. This is precisely the question the book unravels by looking back at former American President Barack Obama’s and current President Donald Trump’s elections where social media, particularly Facebook had played a major role in the campaigns. What the pundits had not reckoned with was the impact the newer kid on the block – WhatsApp will have, considering its mega role in making viral news elements that are volatile, insidious and fake. With Prof. Khan’s background in visual media research, he critically looks at how these new media companies and platforms have  been exploited by the election campaign managers.

In one of the chapters, Prof Khan deciphers the visual imagery that appeared in the newspapers during the 2014 Indian elections. He unpacks lucidly the visual communication model which enabled team Modi to leverage the news media by strategically and carefully crafting compelling visual stories and completely capture the minds of the public and create positive perception for his candidature. Been cleverly managed. To quote from the book: “The patterns that emerged from the analysis are a clear indication of a robust and well-thought photographic communication strategy in place; it does not seem to be just happenstance or coincidence. BJP was the only party with visible and consistent patterns in their use of photographs. They maintained a constant flow of photographic communication in both the newspapers depicting their focus on the use of newspapers for dissemination of messages. Whether it was the media that decided to feature photographs of BJP and Narendra Modi in a certain light and a certain way, or whether it was the political party that pushed for the publication of the photographs, a coherent strategy was perceptible.”

A political revolution in history is usually ushered in when the larger population experiences social or economic oppression and high degrees of corruption. Such regime changes are usually accompanied with a high degree of bloodshed and the country goes through a radical shift in political ideology. The general election in 2014 has been considered historic in many ways for a country like India to have first experienced over two centuries of British imperialism and hegemony, to have then largely been led by a single party, The Indian National Congress, which had seen politicians from relatively well of backgrounds. The eve of the 2014 general elections saw massive media expose’ and fearless journalism, where the Indian media spoke truth to power, exposed rampant corruption and several scams that shook the nation. This book is the as much the story of elections in India, its incredible democratic public institutions, its millions of voters, as it is of a common man, often called a “Chai wala” or ordinary tea seller, who rose from the rank and file of the Bhartiya Janta Party, to become the elected leader of the world’s largest democracy. This is a book which needs to be read by Modi’s supporters and his critics, by the believers or the Bhakts, and the anti Modi brigade, for it powerfully and lucidly informs the discourse, backed by original research as to how Modi became the Prime Minister in 2014 and repeated a stunning victory with an even bigger majority in 2019. It needs to be read by the conspiracy theorists and the out of touch with reality advocates, written in an easy to understand language it brings the readers close to the current realities in India, while effectively tracing the historical journey of this great nation. It showcases how the new Indian is delighted and filled with pride when Modi takes to the International stages in some of the biggest global venues. It talks about the journey when elections were fought on the three planks of roti, kapda and makaan, to the India when development and the pace of growth are the real issue, when article 370 is an election issue.

Written in easy-to-understand language, the book is an unputdownable, rapid read about India’s fast-changing politics, shifting-sand ideologies and the issues which the voter cares about, where and how to engage them meaningfully and powerfully and sheds light on how savvy the new age Indian politicians and parties have become. Driven by data and fuelled with analysis and insights about emotions, issues, causes, campaigns, choices, circumstances of the Indian voter , this is the coming of age story of the business and practice of media and campaign management and effective advocacy where communication and data professionals are new stars and where the new age politicians is not afraid of newer social experiments taking forward legacy campaign strategies but not without peppering them with a healthy dose of technology. The book highlights the fact that the social media has not just become a daily battleground for fake news but has tightened its tentacles around the core of Indian democracy – its free and fair elections. This is a must read and possibility one of the most of the most critically important book of the times we live in.  The game of votes responds to critical questions of how elections are won and fought in India today and this is a critical issue for not just the citizens of India but also for all friends of India, making it a must read book.