K. V. Thomas a law graduate from Kerala University has over 36 years of distinguished career in Intelligence Bureau (IB), MHA, Government of India, in various capacities in different parts of India. He superannuated from IB in 2010 as Assistant Director. For his outstanding contributions, he was decorated with President’s Police Medal for distinguished service (2008) and Indian Police Medal for meritorious service (1996), besides special awards of the Bureau for his outstanding professional contributions.  The National Police Academy, Hyderabad awarded him Police Fellowship in 1997 for undertaking a research project on Policing which he successfully completed in 1998. He has authored 5 books mainly on Internal Security, Human Rights and Insurgency: 1. Human Rights, Terrorism and Policing in India (1999) 2. Policing in 21st Century—Myth, Realities and Challenges (2012).3. Left Wing Extremism &Human Rights (2014); 4.Kerala-Insurgency Politics (2018) and 5. ISRO- Misfired-The espionage case that shook India (2019). 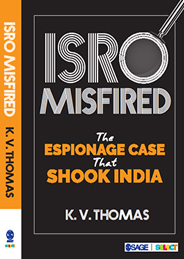 Espionage, Christopher Andrew[1] reminds us, is the second oldest profession.  The Holy Bible reveals that Moses’s successor Joshua sent a couple of agents to spy out ancient Jericho where they were sheltered by the madam of the local brothel. Sun Tzu, the most famous and influential of the Chinese military writer says that success in the realm of war relies on ‘foreknowledge’, which in turn requires intelligence through espionage.  Lord Wellington ran his own highly successful espionage network, even though he was humbugged by Napoleon on the eve of Waterloo[2]. During the ‘cold war era’, espionage agents of all time such as “The Cambridge Five’[3] ‘Aldrich Ames’[4], The Rosenbergs’[5] etc. played historic role in the power struggle between the United States and the Soviet Union and their allied powers. Ian Fleming had immortalised the art of espionage through his fictional character ‘James Bond’ (007) and his dare-devil operations across the world! Even after the cold war era, the intelligence tool of espionage continues to play a decisive role in global power politics and in the strategic and economic conflicts between nation states. The new challenge of global terrorism and the emergence of non-state actors tacitly or clandestinely sponsored by ruling regimes in many countries has added new dimensions to espionage and related operations.

Thus, building up of a professionally competent counter-intelligence or counter-espionage set up has become one of the core areas of internal security planning or architecture of any nation. The primary role of any such set up is to ‘deter, detect and destroy’    the espionage or related operations by hostile or alien powers jeopardising the security or stability of a nation. A number of covert tradecraft tools or mechanisms such as Agents, surveillance, interrogation, cover assignments and Technical operations have been used to meet the challenge.  The more professionally superior these tools or operations, the greater will be the success in achieving the tasks. On the other hand, when the major players carry out such sensitive tasks without due diligence that will open a Pandora’s Box of controversies and disputes adversely affecting the image and reputation of the major stake-holders.

This title ‘ISRO- Misfired-The espionage case that shook India’ examines many such crucial issues connected with the infamous ISRO espionage case of 1994 that created big bangs in our scientific, political and investigative fields.  This case had all ingredients of a spy-thriller – women, sex, money, blackmail, space scientists, technology leak, etc. just like the Hollywood spy-thriller ‘From Russia with Love’. Thus, the story unfolds in 1994 with the arrest of Maldivian lady   Mariam Rasheeda, then described by many as ‘modern Matahari’ and her accomplice Fauzia Hassan for their operations to lay hands on sensitive documents/ cryogenic  technology of ISRO  which  was at the cusp of developing Cryogenic engine capabilities with help from Russia. A couple of senior ISRO scientists namely S. Nambi Narayanan and D. Sasikumaran and others like Chandrasekharan  the India representative of Russian Space Agency Glavkosmos who were suspected to be in the espionage network, were subsequently arrested.

Ecstatic over the detection of an ‘espionage case’ in Southern India after many decades, various security/ enforcement  agencies quickly built up the ‘spy story’ based on the interrogation statements of the suspects, which were truth, semi-truth or total lies. Acting swiftly, a Special Investigation Team of Kerala police vigorously pursued such ‘leads’ without adhering to the ‘due process of law’ or the basic canons of criminal investigation. It cast a shadow of serious doubt over the veteran Congress leader K Karunakaran, the then Chief Minister of Kerala for defending the then inspector-general of Kerala police Raman Srivastava whose name too has surfaced in the spy-network. All hell broke loose when the political parties and the vernacular media entered the scene with their sinister motive to dethrone K Karunakaran from the Chief Minister post. Not only that Karunakaran fell, but also that even, the then Prime Minister of India P V Narasimha Rao was not spared in such orchestrated campaign.

With the CBI taking over the investigation of the case, the story took a different line. They exonerated all the accused without finding an iota of evidence or material on espionage or related offences under Official Secrets Act, 1923.  Then followed the unending legal battles in various Courts with the apex court finally exonerating all the accused. Yet, Nambi Narayanan continued his historic legal battle for over two decades against the alleged perpetrators of his arrest and humiliation. He ultimately won the battle in 2018, when the Supreme Court ordered granting him Rs 50 lakhs as compensation for malicious prosecution. But, two other accused, Chandrasekharan and SK Sharma, who were also fighting for justice passed away during 2018.

But, the ISRO espionage story does not end: it still creates strong ripples in the politics, functioning of intelligence and law enforcement agencies, media and Judiciary. The book seriously looks into these grey areas and come out with significant insights into these critical areas of internal security. Firstly, we should not ignore the reality that espionage is life and death game in which the players –male or female- would take all precautions not to leave any tell tales that would betray them. The real life stories of Mata Hari, Kim Philby and Aldrich Ames demonstrate as how meticulously they operated their espionage network and how difficult was their detection as real spies. Philby who held senior positions in British intelligence set up (MI6) operated for more than 3 decades before taking asylum in Soviet Union, on detection. The heart of the matter is that counter-espionage experts meticulously plan and launch clandestine operations for months or years to build up concrete case before the network is busted. Such an approach was lacking from the part of the concerned agencies in the case of ISRO espionage case!  Instead of discreetly pursuing any clue or input of espionage nature by using various trade craft tools such as surveillance, interception/ monitoring/bugging, clandestine photography and profiling of suspects and their associates- which the counter intelligence agencies are accustomed to- , the suspects of the ISRO case were arrested in haste and interrogated with much fanfare.

This leads to us to the question of professionalism of the organizations entrusted with vital internal security tasks and judicious application of tradecraft tools such as interrogation in counterespionage operations. Ironically, the fundamentals of such tools like interrogation or secret enquiries (spot verification of disclosures) were not adhered to in the ISRO case. This speaks of the need of the proper streamlining of the law enforcement- security- intelligence outfits by ensuring accountability, transparency and professionalism especially when the nation is facing a mosaic of serious internal security challenges mainly from hostile neighbours.

Thirdly, the canons of ‘restrictive security’ (‘concept of need to know basis’) which are vital in the success of counter-espionage operations were flouted in ISRO case. With the easy accessibility of secret information including the disclosures of suspects during interrogation, the vernacular media, having different agenda or motive, virtually celebrated the espionage case by serializing sensational stories with all spicy ingredients- sex, money and foreign agents. Never did the media pause for a moment to ask questions about the veracity of the inputs that they received. The systematic media or public trial of the suspects, had even impacted the decisions of august institutions including judiciary, as manifest from the divergent decisions of different Courts on crucial legal or procedural issues.

Another equally discernible trend is the attempts of political parties to exploit sensational internal security for their narrow vested interests or to ‘size up’ their opponents. When such parties or leaders are in collusion with sections of investigators or law enforcement personnel, the concept of rule of law or ‘due process of law’ is ignored. . Perhaps, ISRO case testifies this cardinal truth!

Finally, the ISRO espionage case, especially the judicial pronouncements by the apex Court, has given new dimensions to the concept of public justice and victim- justice.  The Apex court decision in 2018 directing the State of Kerala to pay a compensation of Rs 50 lakhs to Nambi Narayanan and ordering the constitution of a committee for obtaining factual scenario that led to his arrest sends a clear message to all concerned agencies that offenses against public justice are punishable.  Moreover, the concept of public justice now transcends beyond the conventional spheres of law and is inextricably intertwined with development and welfare. The crucial message is that lack of professionalism or failure of agencies or institutions -as in the case of ISRO espionage story- retards the process of development and the onward march of the nation to new horizons. Perhaps the words of Kumar Chellappan rightly points towards this truth;

‘The ISRO spy case of 1994 not only finished the career of India’s two  exceptionally  brilliant space scientists by implicating them as spies but also put the country’s cryogenic engine development programme on hold for more than 19 years. The programme could have saved India millions of dollar”[6]

[3] The ‘Cambridge Five” a ring of spies in the United Kingdom, which passed information to the Soviet Union during World War II. The members of the ring were, Kim Philby, Donald Maclean, Guy Burgess, Anthony Blunt and John Cairn cross. The term “Cambridge” refers to the recruitment of the group during their education at the University of Cambridge in the 1930s.

[5] Julius Rosenberg, an engineer for the U.S. Army Signal Corps and his wife who were convicted of conspiring to pass U.S. atomic secrets to the Soviets, are executed in , New York during 1953. .