Peter Gonsalves, Ph.D, teaches the Sciences of Social Communication at Salesian University, Rome. This extract is adapted from the last volume of his Gandhian trilogy, Gandhi and the Popes: from Pius XI to Francis (Peter Lang publishers, 2015). The earlier books are, Clothing for Liberation (SAGE 2010) and Khadi: Gandhi’s Mega Symbol of Subversion (SAGE 2012). He may be contacted at www.petergonsalves.in or gonsalves.p@gmail.com

Karol Wojtyła, the future Pope and Saint, John Paul II[1], had read Mahatma Gandhi’s writings and was struck with admiration for him. As a philosopher-theologian and specialist in Christian ethics, he was not afraid to quote Gandhi, as can be seen in his support for Humane Vitae below. The article appeared in the L’Osservatore Romano on January 5, 1969,[2] with the following words from Gandhi’s Autobiography:

I think it is the height of ignorance to believe that the sexual act is an independent function necessary like sleeping or eating. The world depends for its existence on the act of generation, and as the world is the play-ground of God and a reflection of His glory, the act of generation should be controlled for the ordered growth of the world. He who realizes this will control his lust at any cost, equip himself with the knowledge necessary for the physical, mental and spiritual well-being of his progeny, and give the benefit of that knowledge to posterity.[3]

Having written extensively on the ‘Theology of the Body’, Wojtyła was in awe of Gandhi’s resistance to propaganda in favour of artificial methods of birth control on two occasions. He did not succumb, but persevered in the conviction that one ought to act with the force of internal effort rather than outward means,[4] because “Moral results can only be produced by moral restraints.”[5]

In 1986, John Paul II made his first visit to India. In deference to the Mahtama, he called it his ‘pilgrimage’ which he began from the tomb of Gandhi at Raj Ghat, Delhi, on February 1.[6]

My visit to India is a pilgrimage of good will and peace, and the fulfilment of a desire to experience personally the very soul of your country. It is entirely fitting that this pilgrimage should begin here, at Raj Ghat, dedicated to the memory of the illustrious Mahatma Gandhi, the Father of the Nation and “apostle of non-violence”. The figure of Mahatma Gandhi and the meaning of his life’s work have penetrated the conscience of humanity. In his famous words, Pandit Jawaharlal Nehru has expressed the conviction of the whole world: “The light that shone in this country was no ordinary light.” Two days ago marked the thirty-eighth anniversary of his death. He who lived by non-violence appeared to be defeated by violence. For a brief moment the light seemed to have gone out. Yet his teachings and the example of his life live on in the minds and hearts of millions of men and women. … Yes, the light is still shining, and the heritage of Mahatma Gandhi speaks to us still. And today as a pilgrim of peace I have come here to pay homage to Mahatma Gandhi, hero of humanity.[7] 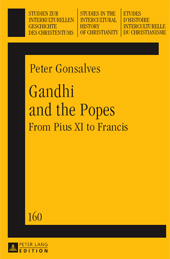 In the ten days he was there [in India], Pope Wojtyła gave forty-three speeches. In my view, however, the most important part of his visit was the long period of time he spent kneeling in silence before Mahatma Gandhi’s mausoleum on his first day in New Delhi. All the speeches he gave in the various cities were prepared beforehand and to some extent taken as a given but there was something extraordinary about this gesture, about a Pope who kneels down before the tomb of a man […] for more than five minutes breaking with protocol.[8]

Eugene. J. Dionne Jr, reporter to the New York Times, corroborates by stating that of all the events organized for the Pope’s visit to India, “the most important moment took place near the beginning when the Pope, shoeless, knelt in long minutes of prayer before Gandhi’s tomb. With the thousands of words the Pope spoke about spiritual brotherhood, his most eloquent statement was: Silence.”[9]

The day that followed being a Sunday, John Paul II celebrated solemn high Mass and delivered a sermon on the issue of social inequality: “The Church in India has for many years been making important contributions to the development of this country and to the alleviation of the problems of the poor.” He cited the work of Mother Teresa as an example and continued:

There is the monumental contribution of Mahatma Gandhi, who helped break down social barriers and divisions and made possible a new era of unity and advancement. “We are all equal. It is the touch of sin that pollutes us and never that of a human being. None are high and none are low for one who would devote his life to service”[10] He stands as a symbol of the highest qualities and values of the Indian people, and is admired in every country of the world.[11]

After mentioning other noteworthy models for Indians to imitate, he added:

The noble efforts of these great men and women of India, efforts aimed at fostering social liberation and integral human development, are in accord with the spirit of the Gospel. All who have advanced the dignity and freedom of their brothers and sisters are blessed in the eyes of Christ, the King of glory. By their efforts, such people help to bring about a civilisation of love, where the rich willingly share with the poor, where the poor can be free from hunger and want, and where everyone comes to realise that “man shall not live by bread alone, but by every word that proceeds from the mouth of God”.

When talking to the huge crowd gathered in Cochin, Kerala, he said:

As citizens of India, a vast country with many languages, customs, and religions, you certainly realise the essential importance of a true spirit of reconciliation and communal peace. This is the spirit that you find in the teachings of Mahatma Gandhi.[12]

To the representatives of the different religious and cultural traditions of India, the Pope explained:

India has so much to offer to the world in the task of understanding man and the truth of his existence. And what she offers specifically is a noble spiritual vision of man – man, a pilgrim of the Absolute, travelling towards a goal, seeking the face of God. Did not Mahatma Gandhi put it this way: “What I want to achieve – what I have been striving and pining to achieve… is self-realization – to see God face to face. I live and move and have my being in pursuit of this goal.” […] [These] very words used by Mahatma Gandhi about his own spiritual quest echo the words quoted by Saint Paul when he explained that God is not far from each of us: “In him we live and move and have our being.”[13]

One needs to be reminded that these effusive statements in praise of Gandhi were not simply a communication ploy to win the hearts of his Indian audience while basking in the warmth of their hospitality. John Paul II was at that very moment highly engaged in the work of liberating his own country through a nonviolent Movement called Solidarność (Solidarity) that was patterned on Gandhi’s Satyagraha (Truth-force).[14] Thanks to this choice, Poland won freedom in 1989, barely nine years after the Movement began, and three years after the pope’s visit to India. Indeed, the ‘pilgrimage’ to India was a prayer for the liberation of his own people! In retrospect, Lech Wałęsa, the leader of the Movement admitted: “We failed when we tried to combat Communism with weapons, but when we took up Mahatma Gandhi’s tactics and strategy, we emerged winners! Truly, the whole world should be a disciple of Gandhi.”[15]

Jonathan Kwitny’s extensively researched eight-year study on John Paul II confirms that “On the evidence, the cold war was won […] by a nonviolent mass movement, like those of Mahatma Gandhi and Martin Luther King Jr., led by a man whose religious office has precluded him from talking about it openly.”[16] In interviews he conducted, colleagues reveal how the Pope “guided them into a major hunger strike” and how “he handed out envelopes of cash to sustain their work. Time and again, as pope, he singlehandedly rescued the revolution he begat, often in dramatic private confrontations.[17]

Moreover, with the accession of John Paul II, the Church officially proclaimed itself as the ‘guardian’ of human freedom in the struggle against authoritarianism. His first encyclical, Redemptor Hominis, denounced violations of human rights[18] – the condition and basis for the true dignity of the human person. Political analyst, Samuel P. Huntington demonstrates how “John Paul II seemed to have a way of showing up in full pontifical majesty at critical points in democratization processes.”[19] Although the purpose of his visits were always said to be pastoral, “their effects were almost invariably political.”[20]

In his 1991 encyclical, Centesimus Annus, he elaborately defended democracy as the form of government most conducive to justice and the mission of the church.

The power of truth leads us to recognize with Mahatma Gandhi the dignity, equality and fraternal solidarity of all human beings, and it prompts us to reject every form of discrimination. It shows us once again the need for mutual understanding acceptance and collaboration between religious groups in the pluralist society of modern India and throughout the world.[22]

On his return flight to India, John Paul II confessed to journalists: “I learned a great deal from him and I am not ashamed to say it. […] I think Gandhi is still alive. Not only is he still alive, he is still necessary to us, to our West. He was never a Christian and never claimed to be [one] but I learned a great deal from him. Christians can learn to be Christian from him. The fact I have quoted him in my homilies should tell you something.”[23]

Back in St. Peter’s Square for the general audience that followed his return to Rome, the Pope elaborated on the importance of his pilgrimage to India and explicitly commended Gandhi’s relevance for a just and peaceful world. “The Father of Indian independence points the way to all who – for the most noble ideals – seek to separate the fight for justice from every form of hate.”[24]

On assessing the impact of his visit, some Vatican officials and Indian Catholic leaders felt that the Pope’s speeches seemed cautious. When asked why he had not criticized the Indian Government’s birth control policies or been stronger in his attacks on the caste system, he replied: “I was not there to criticize. I was there to evangelize. And I evangelized. Exactly that. I have evangelized the Indian people through the words of Mahatma Gandhi.”[25]

[6]  “Address of John Paul II on the occasion of the visit to the Funerary Monument of Raj Ghat dedicated to Mahatma Gandhi Delhi (India)”, Saturday, February 1, 1986, http://www.vatican.va/holy_father/john_paul_ii/speeches/1986/february/documents/hf_jp-ii_spe_19860201_raj-ghat_en.html