Naresh Chandra Saxena has been a career civil servant. Topper of his batch (1964) in the IAS, Dr. Saxena retired as Secretary, Planning Commission in 2002. He also worked as Secretary, Ministry of Rural Development (1997-99) in Government of India. During 1993-96 he was Director, National Academy of Administration, Mussoorie, which trains civil servants. On behalf of the Supreme Court of India, he monitored hunger based programmes in India from 2001 to 2017. He has chaired several government committees, such as on ‘Women’s Land Rights’, ‘Identification of poor families’, ‘Implementation of Forest Rights Act’, ‘Joint Review Mission on Elementary Education’ and ‘Bauxite Mining in Orissa’. Dr Saxena did his Doctorate in Forestry from the Oxford University in 1992. He was awarded honorary Ph.D from the University of East Anglia in 2006. He has worked on development issues in Laos, Cambodia, Vietnam, East Timor, Saudi Arabia, Singapore, and Afghanistan. He regularly advised UNICEF and UNDP between 2002 and 2017. 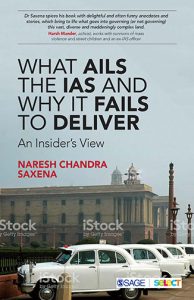 Despite impressive economic growth in the last three decades India could not achieve many Millennium Development Goals (MDGs) set by United Nations, particularly in hunger, health, nutrition, gender, and sanitation. The latest Global Hunger Index has ranked India a lowly 102 among the 117 countries it has mapped. Even within South Asia, India is behind every other country. India’s social indicators are today worse than countries poorer than India such as Bangladesh and Vietnam. Besides, growth has not helped the most marginalized groups, such as tribals and women.

Divergence between growth and development witnessed in India clearly explodes the trickle-down theory that rapid growth by itself would take care of the underprivileged. Though India has done well where contractors are involved, such as road transport and power supply, India does poorly in all programmes that require active involvement of grassroots bureaucracy without contractors; whether it is the quality of education,  immunisation, health care, maintenance of land records, groundwater management, crime control, and so on. Unfortunately governance in India at the state and district levels is quite weak, manifesting itself in poor service delivery, uncaring administration, corruption, and uncoordinated and wasteful public expenditure. My book analyses the present Indian situation and suggests systemic changes in all cross-cutting systemic issues, such as the role of politicians, size and nature of Indian bureaucracy, accountability, M&E of programmes, and civil service reforms.

Is something wrong with the IAS?

India’s administration, both at the Centre and State’s level, is dominated by the Indian Administrative Service (IAS) officers, recruited after a tough competitive examination in which one million appear annually and only 200 are selected. Most IAS officers are brilliant, hard working, and honest. Many of them also try to remain distant from unscrupulous politicians. But people are more interested in the outcomes that the system is responsible for, rather than in their personal qualities. Are teachers and doctors present in their place of postings and providing quality services? Are widows and disabled receiving their pensions regularly in time? Do land records reflect the ground reality and are updated without bribes? Are street vendors and rickshaw pullers able to earn their livelihoods without harassment? Are outcomes being measured and reported honestly, so that corrective action can be taken to improve delivery? I am afraid the answer to these questions is in the negative.

One of the main reasons why systemic reforms have not been initiated by the IAS officials is the lack of stable tenure. Postings and transfers are two well-known areas where the evolution of firm criteria can easily be circumvented in the name of administrative efficacy. Even if the fiscal climate does not allow fresh recruitment on a large scale, a game of musical chairs through transfers can always bring in huge rentals to corrupt politicians. As tenures shorten both efficiency and accountability suffer. In a north Indian state the average tenure of an IAS officer in the last 20 years is said to be as low as six months, leading to a wisecrack that ‘if we are posted for weeks all we can do is to collect our weekly bribes’.

While presiding over a meeting of the Planning Commission in 2001, Prime Minister Vajpayee lamented that the problem with poor states was that they did not have any industry. I made a cheeky remark, ‘Sir, these states have a flourishing transfer and posting industry’. He looked angrily at me for making fun of his tribe.

A high degree of professionalism ought to be the dominant characteristic of a modern bureaucracy. The fatal failing of the Indian bureaucracy has been its low level of professional competence. The IAS officer spends more than half of his tenure on policy desks where domain knowledge is a vital prerequisite. However in the present environment prevailing in the States there is no incentive for a young civil servant to acquire knowledge or improve his skills. There is thus an exponential growth in both, his ignorance and arrogance. An important factor which contributes to the surrender of senior officers before political masters is the total lack of any market value and lack of alternative employment potential. Of late, some senior officers after retirement are being hired by the private sector, not so much for their professionalism, but for their ability to influence government in favour of the hiring company.

It is counterproductive to fill up senior positions with career civil servants who do not have previous experience in that broad field. Therefore after the first ten years of service each IAS officer should be encouraged to specialise in one or two chosen sectors by not only giving them long tenures but even permitting them to join academic or research organisations where they could improve their intellectual skills.

Government of India (GOI) transfers more than 40 billion US $ every year to the states. Evidence suggests that many state governments, especially the poor ones, are neither able to draw their entitled funds from GOI, nor are able to release these to the districts/villages in time, with the result that GOI is often constrained to divert the unclaimed funds to better performing states. An evaluation by Unicef showed that only less than 10% of grassroot workers in Bihar, a poor State, received honorarium regularly, most received it only twice in a year rather than monthly.

GOI’s own studies show that even electronic transfer takes months with the result that in Mid Day Meals programme ground staff such as cooks and helpers are not paid for months, Similar delays take place in supply of text books, filling up of vacancies, especially in the remote and tribal areas, capital works, funds for maintenance, etc.

The bulk of expenditure in education and health typically flows to the salaries of teachers and health workers, yet widespread absenteeism means that services are not effectively provided. Teacher absenteeism, particularly in the north, is endemic, with almost two-thirds of government teachers either absent or not teaching at the time of the investigators’ unannounced visits. A study by the Planning Commission found that on surprise inspection in Bihar and Rajasthan just a quarter of doctors  were physically on duty at the Community Health Centres. Absenteeism is rampant though seldom measured.

A few years ago I visited a rural school in north India. I wrote on the black board a two digit subtraction (31 minus 18), and asked the class V students to do it. Then I went round the desks, and found that hardly half of the students could do it correctly. Next day when I met the District Head I asked him if he or his team monitored quality of learning. He said, ‘Sir, you are the first person to be asking me this question. Government has never asked this, they only want to know if I have spent the allotted budget, built the new classrooms, and recruited the requisite number of teachers. There is no column in my format about the quality of learning’.

Equally, state governments do not discourage reporting of inflated figures from the districts, which again renders monitoring ineffective. As data are often not verified or collected through independent sources, no action is taken against officers indulging in bogus reporting. The practice is so widespread in all the states, presumably with the connivance of senior officers, that the overall percentage of severely malnourished grade III & IV children, according to the data reaching GOI from Jharkhand was only 0.5 per cent, as against 16 per cent reported by Unicef in its survey. The field officials are thus able to escape from any sense of accountability for reducing malnutrition. One district head, when confronted with this kind of bogus figures, told me that reporting correct data is “a high-risk and low-reward activity”!

The situation can easily be corrected by greater transparency of the district records that should be put on a website, and by frequent field inspections by an independent team of experts, nutritionists, and grassroots workers. The Ministry of Women and Child Development at the Centre should also pull up the States for not recognising and reporting almost 90 percent of the severely malnourished children.

A good civil service is necessary but not sufficient for good governance; a bad civil service is sufficient but not necessary for bad governance. Unfortunately, in many Indian states, politics has become a business. Politicians put pressure on the system with a view to maximising private gains. Governance reforms are intractable under such ‘kleptocracy’ that exploits national wealth for its own benefit and is, by definition, uninterested in transparency and accountability. A pliable and unskilled civil service is actually desirable from its point of view – public employees dependent on the regime’s discretionary largesse are forced to become corrupt, cannot quit their jobs, and reluctantly become the regime’s accomplices. Providing financial assistance to such states by the Central Government without linking it with performance and reforms will be a waste of resources. Recent efforts by Niti Aayog, GOI’s think tank, to improve governance by publicising inter-state performance on key indicators is a laudable step. Let us hope the Aayog evaluates states on transparency, public satisfaction, and integrity too.