Dr. N. Mythili is an expert in school education with sixteen years of professional experience. She obtained national scholarship to do her Ph.D. at Institute for Social and Economic Change, Bengaluru. In her Ph.D. thesis, she carried out an in-depth study on time on task in teaching-learning process, an unexplored area in the year 2000. Currently, Dr. Mythili joined National Institute of Educational Planning and Administration (NIEPA), New Delhi in 2013 as Assistant Professor. She has played a crucial role in developing the Curriculum Framework for School Leadership for Indian context and established school leadership academies in different states of India.   Her research articles on the community pressure for achieving higher quality, effective use of time and quality education, regulatory mechanism in teacher education, governance and leadership, legitimacy of school leadership of women, quest for success of women leaders, innovations and the like are published in well-known journals in India. 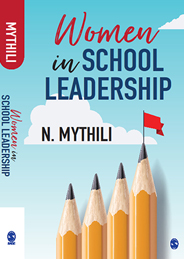 School leadership, as we know well, is the second most important factor influencing student learning and constitutes the prime factor for overall improvement of school quality. Women principals play a crucial role in influencing school quality due to their unique leadership practices such as caring, relationship oriented, democratic, sharing power, and so on. Besides, they also practice academic, transformational and collaborative leadership styles predominantly. They also bring in a different perspective to strategic decisions being less autocratic, rewarding others, adopting participatory approach for consensus building, share power, use power to influence rather than for coercive actions and role-modeling.

Due to the fact that teaching is treated as a quasi profession, women leaders in teaching profession, especially in school education, do not get adequate attention in discourses related to Gender and Development (GAD) and Women in Development (WID).  In developing and traditional country contexts, Women especially face tensions due to interaction between opposing dyadic factors such as masculinity-femininity syndrome, covert compulsions to assume a male persona, socio-cultural effects, thwarted opportunities, patriarchy, drawing parallels between home and school for their roles as teachers, and an ‘all-protective male brother-like’ teacher at the school taking care of female teachers on whom family of female teachers has trust.  Women school heads use parallel strategies of both conformity and resistance in mediating their agency to face challenges and difficult situations.

The representation of women in these school leadership positions is influenced by the recruitment and promotion policies of the state, distribution of school categories and their proportion in the states/UTs, parallel leadership positions existing within the programmatic structures of the state where women might make choices to work on deputation or transfer rather than in the school, and lastly their achieved and ascribed capabilities, the privilege they wish to exploit in becoming and being  school leaders.

A five step ladder of school leadership of women emerged from the narrative analysis of the qualitative data obtained from interviewing 20 women school heads spread in 8 different states. Another step was added to this ladder using the results of secondary data analysis carried out earlier. All together, six steps emerged to construct the ladder of school leadership of women in Indian context. These steps of ladder are: availability of opportunity for leadership positions, aspire, acquire, achieve, ascend, and transcend (see the figure). Each step of the ladder is summarized herewith.  Availability of opportunity for school leadership position constitutes the first step and has been explained above. Remaining steps are going to be explained.

Aspire refers to drawing Inspiration and support from both parents and husband- the significant others- for the woman aspirant. She tries to exploit the Intellectual capital prevailing in the family to acquire necessary qualification and learns to compete for the job from family’s orientation for employment through vocational anticipatory socialization. Since parents also aspire and influence their daughters for a decent occupation that gives stability to their life, it is also a collective aspiration of the family. This is the second step in the ladder. 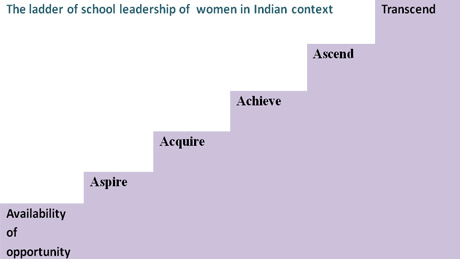 Women try to negotiate and assert their leadership through resilience, caution, diligence, sometimes working silently, proving positivity, neutralise sensitive situations despite experiencing a subtle tension  continues to exist between expectations by education system, family while trying to realise personal goals. They also attempt to depoliticise complexity with an explicit attitude of “All is Well” refusing to heed to tension saying ‘There is no problem at all’ to construct a safety net of shadow neutrality around and yet problematise wherever negotiations are possible. All these tantamount to building a strong determination balancing that of resilience while practicing school leadership effectively. This is the fourth step in the ladder called ‘achieve’. At this stage, women perceive higher power differentials and low status since they are in the process of establishing leaders by positioning their potentials through achieving desired results. This entails a moderate degree of legitimacy to their leadership. Hence, it is necessary for woman to cross the threshold of perceived higher power differentials is crucial to stabilize themselves as leaders.

Sustaining success gained in different instances is crucial. For this women leaders work hard by crossing professional barriers and systemic constraints fairly well to move to the fifth step, Ascend. At this stage, they try neither to encourage patriarchy nor succumb to the status quo. They assert merit over gender based choices, adopt caution to address covert and overt gender practices, and put different capitals inherited or acquired to maximum use – social, intellectual, cultural, and financial so that they are sufficiently and comfortably able to raise the bar of excellence, demonstrate confidence, emphasise on self effort, exercise agency more conspicuously to excel as professional leaders by achieving results. They do this besides fulfilling the demands of multiple roles and responsibilities as wives, mothers, teachers, etc. In this step, they experience higher status, lesser power differentials with moderate negotiation to gain higher legitimacy as leaders.  Recognition also comes to certain women school heads significantly at this stage. Few women got higher responsibilities in the education system which they are more than happy to do and deliver the best results considering it as a privilege rather than excess work outside the responsibility of the principal’s role. This is a phase when women have established as successful leaders beyond doubt and are safely placed as leaders within the system.

However, some of the women gradually mature into transformational leaders through their works and engagement. They begin to consider school leadership as a means for rising to higher realms of life to gradually transform oneself with an attitude of service serving the cause of children’s education irrespective of the different forms of capitals that her family can provide her. School structure serves as an important means to strengthen their agency to cross over the norm-based leadership effectively mediating the constraints and challenges. These women surpass the structural boundaries and constraints of educational system and family even when they are working in the schools as its school head. Hence, the sixth and final step, Transcend, is a stage achieved even while facing the challenges and overcoming barriers and limitations by deriving a sense of self-worth through leadership, achieving a sense of fulfillment and confidence having worked to one’s satisfaction and respecting whatever opportunities were available to them.  At this stage, degree of acceptance of their leadership by others very high and negotiation is least characterised by least perception of power differentials that accords high legitimacy as school leaders.

These women school leaders climb different steps of the ladder by interacting with structures exercising fundamental or practical–evaluative agency juxtaposed with fundamental and/or domain specific capacity. To establish legitimacy as leaders, they practice promotion focused leadership behavior and/or prevention focused leadership behavior using culturally congruent leadership and/or universal leadership styles duly exercising rational or traditional gender perspectives according to situations. These women build trust with people, practice people-centred approaches and a restrained neutrality to succeed as leaders. They not only experience the taste of success but also the bitterness when denied, mis-recognised, under-recognised which makes them strong to smile at failures, accept denials, develop dispassion to let-go and continue to look afresh to  pursue their dreams in spite of adversities. Hence, gender in school leadership of women is a peculiar admix of binaries – exercising caution over fearlessness; practicing masculinity and femininity; silently resist covert compulsions arising from patriarchy yet verbalise it occasionally; use intuition over logic and; make no distinction between personal and professional life at times.

In this way, the book tries to capture the process and the path through which women succeed as school leaders to strength the case for women school leaders to be legitimate stakeholders of global discourses on WID and GAD.