Dr Kalinga Seneviratne, is a Sri Lanka born journalist, radio broadcaster, television documentary maker and a media and international communications analyst. He has been a development communication consultant for UNESCO and was the Head of Research at the Asian Media Information and Communication Centre (AMIC) in Singapore from 2005-2012. He has taught radio production, international communications and journalism in Australia, Singapore and Thailand. Kalinga holds a Phd in International Communications (Australia), Masters in Social Science (Australia) and Bachelor’s degree in Engineering Science (UK). He specializes in development journalism and feature writing and has been writing for the Inter Press Service (IPS) and IDN In-Depth news since 1991.  He has written over 1000 feature stories in a career spanning more than 25 years covering over 30 countries. He has edited many books and written published research papers on development communications and journalism with an Asian perspective. His edited publications include “Mindful Communication for Sustainable Development: Perspectives from Asia” published by SAGE in 2018. In 1987 he received a UN Media Peace Award for a series broadcast on Australian community radio looking at the relationship between rich and poor countries. 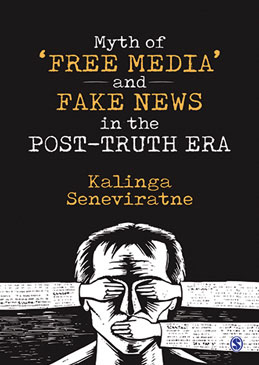 In January 2003, French Communications Professor Ignacio Ramonet told an audience of over 5,000 young people, mainly from Latin America, attending the World Social Forum in Porto Alegre in Brazil that Corporations now own and produce not only traditional media, but everything which we call culture and communication. They are also involved in leisure, pop music, cinema and sports. They have no objective of being the ‘fourth estate’ to protect the citizenry from abuse of power by governments. “They have come together as a power,” he argued. “The fourth power (estate) is now exploiting and oppressing the populations (for their own profits). How can we tackle this power, which has transformed from friends of the citizenry to its enemy?”

Throughout the period I was writing this book, attempts to get Wikileaks founder Julian Assange out of the Ecuadorian embassy in London and extradited to the US to face espionage charges was gathering steam. One would argue that he was practicing ‘watchdog’ journalism to its core, but for the US authorities he was a hacker and a security threat. Now many governments, the latest his home country Australia, are enacting laws to jail whistle blowers who expose governments’ abuse of power.

This dilemma is the central focus of the book, where it is argued with numerous examples, that the so-called  “liberal free media” in the West has jettisoned its ‘watchdog’ role as news turns into a commodity for sale.

When I began writing this book, my mind went back to the 1980s, when as a raw reporter, I interviewed veteran Indian journalist Chakravarti Raghavan in Geneva, when he told me “exception makes the news”. Few months later when I put this question to Michael Ruepka, the then editor-in-chief of Reuters news agency, he told me: “No one is interested to know if I went to work safely, but, if you fell under a bus, they will be interested to know how”.

So that is what is news – reporting about exceptional circumstances – not the everyday reality. Thus, we have set ourselves up for the current era of news as entertainment. How India’s most popular TV news anchor Arnab Goswani has taken this to new heights with his rating-topping panel discussions where everyone shouts at each other, is discussed in length in the chapter that discusses whether we ever had a truth era.

Today, the mainstream media (MSM) battles for relevance in an age of excessive commercialization and challenges from the Internet. Ironically, the wave of media “liberalization” that have been pushed through around the world by western liberals have weakened the basic premise of the Libertarian Media Function Theory (LMFT).

As the broadcast media in particular, transforms from a public enterprise to a commercial entity, it has changed the way journalism is practiced globally. News media has drifted towards a public relations and influencer-pedaling paradigm that is manufacturing consent to suit the interests of whoever owns the media.

We have been teaching in journalism programs for over half a century that for the media to be free it has to be privately owned. It is only then, that the media is able to play the ‘watchdog’ role of a ‘fourth estate’. It is also what differentiates a “free” media from that of a “controlled” media in an authoritative state, where the media are owned by the government. The ‘four theories of the press’ that were prescribed in the 1950s and still widely taught in mass communication programs, assign the LMFT to describe the former and Authoritarian Media Function Theory to defined the latter.

LMFT worked as long as the media owners only owned the media. But, when the media – both at international and national levels- began to be owned by business conglomerates that are sometimes more powerful than government, the libertarian model of the “free media” began to unravel. As Noam Chomsky amply describes it, journalism has become a system of ‘manufacturing consent’ to promote the interests media owners. Unfortunately, this Propaganda Model, which he developed with Herman and McChesney is not often discussed in American textbooks that are used in mass communication programs across the world.

In this context, President Trump’s continuing outbursts about the “fake news” American MSM, even going to the extent of describing it as “enemies of the American people” – echoing similar sentiments to Professor Ramonet – though for different reasons, should be welcomed. Unfortunately, the American media has responded by attacking the President rather than paying attention to his message of why the media may not be reflecting the sentiments of the people that voted for him. What made them to embrace his message? Just labeling them as “xenophobic” or “racist” is not ‘watchdog’ journalism.

The socio-economics of why they are against free trade deals, globalization and immigration need to be investigated and analyzed. This is also a concern expressed by millions of people across the world. A whole chapter has been devoted to discussing how neo-liberalism is breeding inequality across the globe while the MSM is largely ignoring it.

MSM’s global news agenda  need to include and ask questions such as, why are people who are not producing anything, like the bosses of Facebook and Amazon, are among the top 10 richest people in the world? They need to investigate the power of the pharmaceutical industries to protect its profits at the cost of affordable medicines for most of the world’s population; how 911 has scuttled a growing ‘global justice movement’; why mining companies should be taxed more; how the world’s rich and the corrupt exploit globalization of financial flows; and why labour migration is a 21st century slave trade.  The book examine these issues and MSM’s failures.

This leads to where western-centric news values are questioned, and it is argued that imbalances in news – especially at international level – occurs because the truth is subjective.

Way back in 1980, founder of the Asian Press Union Tarzie Vittachi argued in a column published in Newsweek that the news values practiced by western media is coloured by their cultural viewpoints. Which makes “a bikini a more appropriate  symbol of civilization than a sari or a chador”.  This theme is further expanded in the book with examples of western reporting and its cultural biases – such as in the reporting of the defeat of Tamil Tiger terrorists in Sri Lanka; focus of the 2004 Asian Tsunami reporting; focusing on China’s Belt and Road Initiative as a “debt trap”; why US war crimes are not addressed when reporting Obama’s visit to Hiroshima and Laos; and many others. Former head of UN Information Division Dr Shashi Tharoor points out that such subjective news reporting reflects a lack of respect for the “other”.

Dr S Gurumurthy, an Indian chartered accounted turned journalist and influencer notes, that liberal ideology which says “I am the only truth that I only know what the solution is” has become the greatest threat to freedom of expression.  He argues, that “the media cannot produce right communication, because the ecosystem has been taken over by ideological drolls”. This is discussed at various points in the book with regards to donor funded NGO media that have created chaos like the ‘Arab Spring’.

Singaporean strategic communication specialist Viswa Sadasivan warns that freedom of expression is being threatened by  organized syndicates (such as western donor driven local NGOs) or organized government regimes employing these powerful platform to reach out to young people who are seeking for something to believe in. “(They) are manipulating these minds, using the same platforms that they have come to trust. That for me is grossly unethical,” he argues.

With the advent of new communication technologies, the alternative media – known as “social media” – is today able to compete with the MSM on a level playing field. The latter’s hysteria is fuelled mainly by the fear of this competition, and often exposure of the MSM’s shortcomings, especially in terms of subjective neo-liberal biases.

British MSM’s attempts to de-legitimise Jeromy Corby and his successful use of social media to brand himself; Philippines Rodrigo Duterte’s successful presidential campaign using young cybertroopers; and Malaysiakini’s low-cost internet news portal’s success in influencing the political agenda in Malaysia are examples of how the alternative has made an impact. While there are real ‘fake news’ that is a worry with the low cost distribution model of the Internet, yet, disinformation is not a new phenomena. We need to be careful that the Fake News hysteria will not result in stifling different opinions.

The ‘watchdog’ journalism model we have been teaching and practicing is too adversarial and today the news media is driving conflicts rather than helping to resolve these. Balance we have been told is giving two sides to a story, which in itself creates a conflict.

In the final chapter, the book discusses a mindful journalism model drawing from philosophical ideas from Asian (mainly Buddhist) wisdom, to develop a journalism culture of cooperation and promoting harmony in society. There are many examples taken and discussed about why the media need to investigate and expose ‘structural violence’ of the global economic system, which is driving conflict and inequality.  The real “watchdog” journalism is to expose those who are abusing their power and they are not necessarily governments. The book calls for a new paradigm in training journalists.