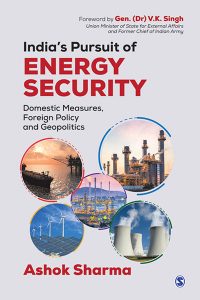 India is the world’s third largest energy consumer and is expected to continue to supersede the growth rate of all major economies. The high GDP growth rate in India is key to raise standards of living, provide electricity to all houses and lift millions of its people out of poverty. India has to also create millions of jobs for its young demography every year, embark on its developmental goals and shift to manufacturing industry as reflected in Prime Minister Modi’s ‘Make in India’ programme. All this means more and more energy.

But, India with almost 1/5th of the world population is not very well endowed with energy reserves. The domestic reserves and measures are not sufficient. The source and composition of such energy are also crucial given the twin challenges of climate change as well as the paucity of domestic sources of energy, the latter necessitating India’s hunt for energy sources abroad to face energy geopolitical challenges from China.

This book titled India’s Pursuit of Energy Security: Domestic Measures, Foreign Policy, Geopolitics is an in-depth analysis of India’s pursuit of energy security in the domestic and foreign policy realms amidst the competitive geopolitical environment and the global climate change concerns.

I argue that India’s quest for energy security abroad is a multi-pronged approach and not confined only to the oil and natural gas reserves in the Middle Eastern region. But India’s efforts to access to the new forms of energy and new geological location for the exploration and access to the energy sources, is putting it in direct competition with China. In the past, the competition for the energy sources could be seen between the two superpowers during the Cold War period in which the energy security formed one of the major components in the US-Soviet Union geopolitical rivalry which catapulted into the military conflicts in the Middle East and Afghanistan. The energy competition between India and China is mostly confined to the commercial and diplomatic level, but India’s hunt for energy sources abroad is gradually dragging it into a direct competition with China which may get intensified due to their strategic rivalry and security concerns amidst the unfolding strategic scenario in the Indo-Pacific region.

The book deals above issues of India’s energy security in six chapters and a conclusion.

Chapter two elaborates on India’s sources of energy, reserves and energy mix, highlights the gap between demand and supply, and failure to tap the potential of its domestic reserves. It examines the ongoing debates about the viability of India’s energy basket including fossil fuels such as coal and gas, alternate renewable energy sources such as nuclear, and renewables such as wind, waste to energy and solar energy. The renewables especially solar and wind energy will have its increased share in India’s energy basket in the coming decades, but coal will continue to lead India’s energy mix.  There is no substantial proof that India can address its energy demand, both for consumer and industry, without the use of imported coal to supplement its domestic supply.

Chapter three examines the policy approach and action taken by the Government of India at the domestic level to address its energy security. Three major energy policy frameworks have guided India’s energy security efforts at the domestic level: Integrated Energy Policy, Expert Group Reports on Low-Carbon Inclusive Growth, and National Energy Policy. India’s energy measures have aimed at the exploration and production of the new reserves of hydrocarbon sources, both onshore and offshore, and leverage its renewable energy potentials including solar and wind power. India’s energy policy reforms and regulatory measures include liberalisation of the energy sector by inviting private players, marketing and pricing freedom for new gas production, modernisation and the technological evolution in the energy sector. Encouraging Private Participation focuses on the Electricity Act 2003, the measures taken by the current government to improve the condition of power distribution through the ‘Ujjwal Discom Assurance Yojana’(UDAY) scheme, the opening of coal mines and the renewable energy sector to private companies.

Chapter four asserts that the inadequate domestic reserves of oil and gas and pressing energy demand have pushed energy security as one of the top foreign policy priorities. Since increased domestic production alone will not be sufficient to meet the projected needs for either oil, gas or coal, India is also expanding its efforts abroad. Hydrocarbons constitute the major share of India’s energy basket, and it is important for the base load power. Despite the recent push to domestic exploration & production activities for oil and gas, India needs to look abroad for these sources.

India has been reliant on the Gulf Cooperation Council (GCC) countries which caters   two-third of its oil needs. But over the past decade and half, India has taken steps to diversify its hydrocarbon sources outside the domain of the GCC to the regions of Latin America and Caribbean, Africa, Caspian Basin, Russia and in the recent years in the seas of Indo-Pacific region. And to increase the gas supply, it has engaged in the construction of gas pipelines with its bordering nations. Problems of diversification of energy sources for India arise from the political volatility and geopolitics of the region. Eventually, this has made energy security one of the top foreign policy priorities.

Chapter Five delves into the India’s quest for nuclear energy, diplomacy and agreements. India’s nuclear power capacity is not up to its potential, contributing less than 3 percent of its energy mix. India aims to enhance nuclear energy to 25 percent in its energy mix by 2050.  The international embargo that was imposed after its nuclear explosion for the scientific purposes in 1974 hampered India’s civilian nuclear power capacity generation. The Nuclear Non-Proliferation regime did not allow India to obtain nuclear reactors, enriched uranium and advanced civilian nuclear technology.  To get rid- off the nuclear embargo, India resorted to a concerted foreign policy effort to dismantle the technological denial regime. Consequently, over the past two decades, India has consistently pursued nuclear issues in its foreign policy and concluded nuclear agreements with several countries which required intense diplomacy, lobbying, and negotiations amidst its geopolitics.

India’s nuclear policy has gone through the defiance and dalliance with the international nuclear regime and nuclear weapon states. The chapter gives an insight into India’s nuclear diplomacy and pacts with various countries starting with the US-India Civilian Nuclear Agreement, and its wider acceptance by the international community reflected in the waiver by the Nuclear Suppliers Group (NSG) and safeguard agreement with the International Atomic Energy Agency (IAEA).Then the chapter deals with India’s nuclear agreements in the foreign policy context with countries namely as stated the US, then France, Russia, Australia, Canada, and the UK. India’s nuclear agreements with the above-mentioned countries have been significant for a number of reasons including the influence they hold in the international nuclear regime, their legitimate status as nuclear powers, their advanced and high-tech nuclear technology, best nuclear practices and safeguards, and/ or their abundant uranium reserves.

Chapter six is about India-China energy geopolitics. The energy geopolitics traditionally has been confined to exploration for hydrocarbon sources mainly in oil and gas, and confined to the Middle East and Caspian Basin for a long time. But over the past two decades, the energy geopolitics is being witnessed in Africa, Latin America and Caribbean, Caspian Basin and the Indo-Pacific region particularly in the waters of the South China Sea and the Indian Ocean. These regions are rich in oil and gas and have immense potential reserves. India and China are directly competing for the hydrocarbon sources in these new destinations. This energy geopolitics is mainly because of their overlapping oil and gas exploration and production and gas pipelines in these regions. This is further aggravated by their long-standing strategic rivalry and complex relationship, great power politics in the emerging strategic geometry in the Indo-Pacific region. The India-China energy security geopolitics is not confined to the conventional sources of energy only but it is very much visible nuclear energy and   renewable energy sector as well.

The Indo-US civilian nuclear deal and India’s bid to the NSG and the Chinese opposition to both with failure to stop the first and success at later, India-China energy security geopolitics is here to stay and in a more intense form. Though India-China energy geopolitics largely has been limited to commercial competition, diplomatic tussle and lobbying, it has the potential to catapult in conflict which might get aggravated due to their long adversarial relations.