Teach peace now. Later may be too late.[1]  by Dr Peter Gonsalves 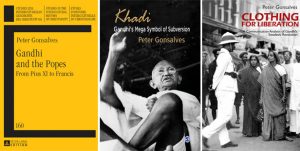 Peter Gonsalves, PhD, teaches the Sciences of Social Communication at Salesian University, Rome. He is author of the Gandhian trilogy ─ Clothing for Liberation (Sage 2010), Khadi: Gandhi’s Mega Symbol of Subversion (Sage 2012) and Gandhi and the Popes (Peter Lang, 2015). He may be visited at www.petergonsalves.in

This is an excerpt of a longer article Peter had written on the importance of Peace Education for India, which can be accessed at academia.edu.
(NB:The link is: https://unisal.academia.edu/PeterGonsalves)

It is said that violence begets violence; that children imbibe violent behaviours from personal encounters with adults in homes and schools.

To check the veracity of this assumption, a unique[1] study on violence in schools of India was undertaken by the National Commission for Protection of Child Rights (NCPCR) in the academic year 2009-2010. The study was published as, Guidelines for Eliminating Corporal Punishment in Schools.[2] Out of a total of 6,632 children who were interviewed across seven states,[3] only 9 denied having received any kind of punishment – that is, 99.8% had experienced punishment of one kind or other. Of the types of punishments received, verbal punishments or abuses were the highest at 81.2%. These consisted of animal name-calling (41.7%), gender-based abuse (14.5%) and caste or community-based abuse (10.1%). Out of the total of physical-contact punishments, some of the most frequent kinds were beating with a cane (75%), slapping on the cheeks (60.9%), hitting on the back (57.5%), boxing the ears (57.4%), pinching (26.9%), hair pulling, especially of girls (21.6%). The postural punishments included standing outside the classroom (53%), standing with hands raised (42.7%), murga banana[4] (41.4%) and kneeling (38.8%).[5]

The age-wise and gender-wise comparative study of corporal punishments are shown in Table 1 below. The popular belief that younger children are less exposed to punishments is not tenable. The data reveals that punishments begin at the pre-primary stage and the idea of the ‘joy of schooling’ is still a dream for many. 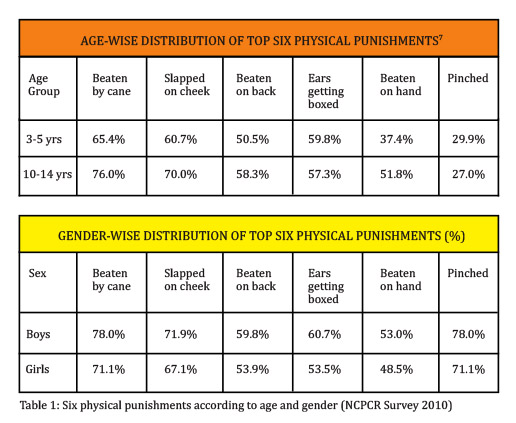 In 2010, the Ministry of Women and Child Development had issued a new set of guidelines that banned physical punishment of students. Since then, heads of schools are held responsible, and teachers found guilty could be denied increments and promotions, and could even be sent to jail. However, enforcement of the law is lax.[7] Yet, to be fair to teachers, the reason of violence in schools can be linked to poor infrastructure, a disproportionate pupil-teacher ratio, and a lack of teacher-training in alternative nonviolent education.[8]

On bringing together the situation of violence in Indian society and the data on violence experienced by children in educational institutions, we are confronted with an uncomfortable question: Could it be that India’s educational system today is inadvertently spawning the very criminals it will struggle to contain tomorrow?

The science of child psychology has amply demonstrated that violence on children causes grave damage to their self-perception and social relationships, promoting thereby a culture of dishonesty and aggression.[9] We present below some of the conclusions of various studies undertaken:

A punitive environment may foster children’s tendencies to lie and to conceal their transgressions.[10] “Deception is a covert adaptive strategy particularly suited for the young and the weak because other strategies such as physical violence are often not an option for them.”[11] “Since punishments give pain, they tend to teach children that at least under some conditions, it is all right to give pain to others. Thus, aggression is an externalized behavior which punishments can cause.”[12] “Everyone understands that corporal punishment is carried out to correct or control misbehavior. What is not understood is that almost all assaults by adults are also carried out to correct what the offender perceives as misbehavior.”[13] When aggressive adults find an ideology they can cling to for psychological, social and economic subterfuge, the fanatic is born; and, in the long run, corporal punishment renders juveniles easy fodder for extremists and terrorists who use violence to serve their ends.[14]

The effects of violence influence the way children relate to each other. The phenomenon of bullying, which has reached ‘epic proportions’[15] in India, is a case in point. Furthermore, when physically punished children become adults, they are more likely to practice corporal punishment on their own children. “Parents, after all, learn most of their lessons about how to be a parent from their own parents”.[16] Thus the maelstrom of violence entraps and enforces generations in a culture of discord and conflict. How do we put a halt to the madness? Is there a way out of the vortex?

In 1931, at a conference delivered to teachers at the Italian school of the world-renowned educator Maria Montessori, Mahatma Gandhi provided an answer:

If we are to reach real peace in this world and if we are to carry on a real war against war, we shall have to begin with children and if they will grow up in their natural innocence, we won’t have the struggle, we won’t have to pass fruitless idle resolutions, but we shall go from love to love and peace to peace, until at last all the corners of the world are covered with that peace and love for which, consciously or unconsciously, the whole world is hungering.[17]

It is never too late to take Gandhi’s intuition seriously. A concerted effort is urgently needed to make nonviolent strategies for living in a multicultural society an integral part of the education system. It is for this reason that a specific resource for teachers and an accompanying workbook for students have been written. They are respectively, Exercises in Peace Education and We Choose Peace. Their 2018 editions can be freely downloaded from the author’s personal website: www.petergonsalves.in

[1] The study was conceptualized to research the scale and magnitude of corporal punishment in the everyday school experiences of India’s children. Its objective was to interview children directly, bypassing adults, in order to know exactly children’s perspectives on what they experienced. .Guidelines for Eliminating Corporal Punishment in Schools, in National Commission for Protection of Child Rights, Government of India, released on 5 March 2012: http://www.ncpcr.gov.in/showfile.php?lang=1&level=2&&sublinkid=143&lid=153 (accessed: 5-10-2017).

[4] Murga banana literally means ‘become a chicken’. The punished person has to bend double in order to hold the ears from behind the legs and to remain in this painful and humiliating posture until ordered to stop.

[16] Elizabeth Gershoff, More harm than good: A summary of scientific research on the intended and unintended effects of corporal punishment on children, Law & Contemporary Problems, 73/2 (2010), p. 32.

[1] This is an excerpt and adaptation from the longer article by the same author: Peace Education for India – an idea whose time has come back, Jesu Pudumai Doss and Sahayadas Fernando (Eds), Prophets with Wings, Accompanying the young in today’s India (New Delhi: AIDBES, 2018), pp. 161-183. See also, Vidyajyoti Journal, 82 (2018) 808-831.