Encountering the Kurds by David Morgan

David describes a personal encounter with the history, culture and struggle of the Kurds.

The story begins back in the mid-1980s, when, having just left university, I moved from Manchester to London. Long before the Internet, the terrorism acts, the bans and the listings of proscribed organisations and all the restrictions on our civil rights and freedoms that we have been compelled to endure in recent years.

In Britain, the nation had experienced the stirrings of an ugly patriotic fervour around the Falklands War, Margaret Thatcher seemed triumphant; the year-long miners’ strike was to be defeated just like those ‘Argies’ had been. Thatcher was inflicting a deliberate deindustrialisation on large swathes of the country, deemed the enemy within. People in the North felt especially victimised. There was more than three million unemployed and young and old were being made to suffer unnecessarily.

The conflict in Ireland, meanwhile, was roaring on, increasingly spilling over onto the mainland, particularly the blood…

Internationally, some could look for inspiration to the peace movement around Greenham Common, while others sought a cause to join in solidarity with the struggles against apartheid, “Free Nelson Mandela” was a rallying cry; the Sandinistas in Nicaragua were facing down a belligerent Ronnie Reagan in the White House aided by his Contras; a little island paradise called Grenada was invaded. This was long before the neo-cons had ever been heard of. The Soviet Union still very much existed and nobody anticipated what fate was to come to that, though there were rumblings in Poland and a protracted war in Afghanistan was seriously depleting resources; then Chernobyl happened.

I knew very little or nothing about Turkey, only that lots of people went on holidays there despite the government in Ankara being a kind of dictatorship; historically it was a bastion against Soviet expansionism, a member of NATO; I had not heard much about the Kurds, still less of Abdullah Ocalan and the PKK. Until, that is, I started working as a journalist on the Morning Star, the people’s daily owned by its readers, as it still likes to describe itself; this was my first job and it was here that I was to encounter discussions with colleagues in the newsroom and the ‘PKK’ kept coming up in conversation. What was this ‘PKK’? We would pick up reports on the constantly tickering Reuters and TASS news tape – as I said no Internet in those days; I was told it was the Kurdistan Workers’ Party which was fighting against an oppressive Turkish regime to achieve the liberation of the Kurdish people, who were savagely treated by the Turks, who denied them even the basic right to speak their own language.

So, it seemed that there was a national liberation movement, with a socialist orientation, right on Europe’s doorstep with its distinct echoes of Che and Mao embroiled in a peasant guerrilla warfare. And I had never heard about it. The Kurdish struggle made up of dedicated men and women with distinct echoes also of the Spanish Civil War.  They looked like inspired youngsters with a cause well worth fighting for. So, all that attracted my attention. I had still not met any actual Kurds though.

Slightly later on, I discovered copies of a glossy magazine named Kurdistan Report, edited by Estella Schmid, while browsing in Housman’s Bookshop in London’s King’s Cross; I realised it was a serious publication, well produced and it made a lot of sense. What’s more the likes of Harold Pinter, Arthur Miller and Edward Albee were mentioned as supporters – as was Tony Benn, Bruce Kent and Julie Christie; as a teenager interested in literature I was a great fan of her films, especially Far From the Madding Crowd, Dr Zhivago and The Go-Between. So I immediately bought a copy of Kurdistan Report. Little did I realise that soon I would be helping to edit its next edition. By this very circuitous route I came to support the rights of the Kurds, although I had still not met any. That encounter came later when I met Estella and began to visit the shops and restaurants of Green Lanes in North London, which is where many of the Kurds from Turkey have made their home.

I’m very proud to have been for many years associated with the campaigns initiated by Peace in Kurdistan to achieve a just resolution of the Kurdish conflict by lobbying to change public opinion and British government policy on Turkey and the Kurds. It has been an uphill struggle, but also worthy cause and a vitally important expression of human solidarity and internationalism.

Abdullah Ocalan, the imprisoned leader of the Kurds, is a Renaissance man of Kurdistan in so many of his attributes; he is an intellectual,  a historian, a powerful orator and writer; an inspiring figure for his people with a message of peace to the wider world. He has promoted women’s liberation like no other leader in the Middle East. What’s more, he is a person who appreciates poetry, culture and the place of human creativity in people’s lives.

In producing the book, Freedom Poems for Ocalan, all the contributors, who include a leading actress, a bestselling Scottish novelist, a Labour MEP, academics, anthropologists and journalists, hope that one fine day Ocalan will be able to read it at leisure enjoying his own freedom; just as, one day, the Kurds will be able to enjoy their own freedom in a free land. 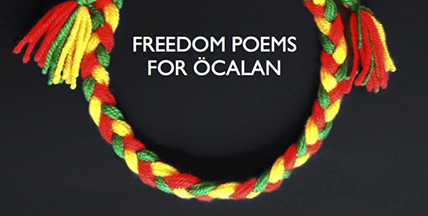 This article is based on a talk delivered at an event held at the Theatro Technis in London on 16 July to mark the launch of the book, Freedom Poems for Ocalan, of which I am the joint editor with Estella Schmid.  The book brings together an eclectic mix of contributors from various fields united in their belief that the struggle for Kurdish freedom is not only a just cause but one that deserves an urgent resolution.