Painting to Restore the Watershed by Theresa Griffin Kennedy

The year I stopped feeling is the year I began to paint.

Theresa Griffin Kennedy is an author, poet and writer of creative nonfiction, and fiction. She is an activist who fights for social change through writing as a social act. Kennedy paints abstract with mixed media and is educated as a creative writing instructor and writing coach. She is the author of three books, Murder and Scandal in Prohibition Portland, 2016, Blue Reverie in Smoke: Poetry 2001-2016, and a book of fiction Burnside Field Lizard and Selected Stories, 2018. She works as chief editor of the Indie Publishing Company, Oregon Greystone Press, and publishes other Portland authors including her husband writer and author, Don DuPay. Her next book, her first novel, Talionic Night in Portland will be published in 2019, and her fifth book The Lost Restaurants of Portland will be published by The History Press in 2020. She resides in Portland Oregon where she continues to write and be published. 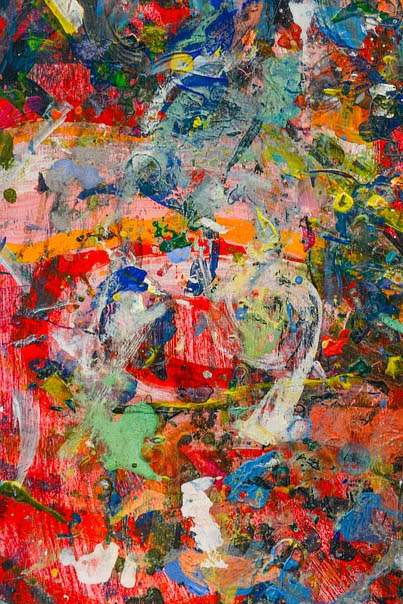 Resonant empathy according to some psychologists and other mental health experts familiar with compassion fatigue can be described as finite. It is said that a person can actually become depleted of empathy if they are not actively involved in some form of restorative self-care. That process can involve connecting with nature, with people, and even experimenting with or creating art.

For empathetic people, the process of absorbing the pain of another person and “suffering together” can be an exhausting and dangerous proposition if not dealt with realistically and with a sense of attention to some form of replenishment of the self.

The danger for those with a strong sense of empathy comes into play when we feel powerless to protect someone, or when we’re dealing with truly defenseless populations, like abused and neglected children, tortured and abandoned animals, or battered and depressed women. Sometimes complex suffering like this seems to exist in a landscape of totality, it seems irresolvable and beyond our ability to control or alter for the better.

For over three decades I could not separate the pain of those I loved as something apart from my own emotional state, something apart from my own pain. I internalized the pain of others, allowed it to become a form of identification, of intimacy, even. As a wife, being verbally and physically abused by my first husband, I connected only to his pain and not my own. And he was definitely in pain, even as he abused me. I thought If Only I Do More. When that didn’t work, I finally walked away. As a mother, living with my second husband, our child’s pain became my pain, and was indistinguishable to me if she was in distress or troubled for any reason.

I always knew that for most of my life I was perceived as the kind of person people called “a soft touch.” That meant I was a softie. I was soft like ice cream—malleable, sweet, easily consumed, and I always made people feel better. I spent years giving to accomplish this, particularly during my teen years and when I was in my early twenties. I gave my time, I gave my money. To men I gave my body, often not asking or even expecting anything in return.

Later, in my thirties, I began volunteering because I thought I could make the world a better place. I volunteered for Cat Adoption Team, and Feral Cat Coalition. Part of my volunteer work entailed holding and “waking up” recently spayed and neutered cats. In my off time, I found hundreds of cats and several dogs’ homes, often rescuing them myself. I paid for their medical needs, and supplied pet food for low income people I came into contact with, despite the fact that I was poor myself.

My daughter and I had a philosophy that we lived by: “Whoever crosses our path” and needs help with a cat or a dog we would help, no matter what. And we did, year after year.

In time, I volunteered at a charity to assist low income Hispanic folks with food, clothing, and to help domestic violence victims. For eight years. The charity even helped with legal representation when workers were not paid as numerous undocumented workers are often exploited, and thusly not paid in the state of Oregon. During most of this time, I was raising a child, my growing daughter and I was the proverbial college student living on loans.

Then, strangely, after so many years of giving, and after so many years of the simple struggle of the day to day of life, I stopped feeling. It was gradual but it happened. I’m still not sure why, or how, but things didn’t seem to matter anymore. I became depressed. I walked away. I quit. My second divorce was probably part of it, and the nine years of single motherhood, too, I suppose. But I quit. I gave up. It seemed that nothing I had ever done had ever made a difference or ever would.

I knew I was in trouble though when I sat on a Trimet bus in downtown Portland and watched two homeless men engage in a vicious fist fight. Their torn clothing hung on them like the rags they were, and I remember only blurred shades of dark blue, black and burgundy. The fragrant apple-like scent of fallen leaves drifted in the bus as I watched them, and their fists flew so fast they lost definition. What was distinct and what I do remember was the distorted anger mixed with the desperate unhappiness that was plastered across their fluid contorting faces.

Another woman sat on the bus and I could tell she was frightened. She felt something. Her eyes were wide and she appeared shocked as the men fell into the side of the bus with a loud thud, and continued to grapple. She looked over at me, as if for comfort, and seemed genuinely scared. But I felt… nothing. And it bothered me. Feeling nothing bothered me. I sat on the bus and looked out the window as impassively as if I were looking at a mediocre sunset. When the bus drove north, I didn’t continue watching the men fight. I allowed my head to drift and there I was looking east in front of me. I felt like there would always be a fight somewhere, and that nothing I might do would ever stop that fight. It would just go on ceaselessly into an uncertain future forever and ever. Nothing I might do would change any of it.

That night I thought long and hard about the past few years and what I had been doing. It was then I realized in a moment of clarity that can only be described as an epiphany, or an awakening of sorts that I was like a well that had run dry. I was like a desert in need of water, to replenish itself. I had to realize something I hadn’t yet: that I could not continue this relentless giving until I had nothing left to connect me to the woman I needed to be, to the woman I was destined to be, to the woman I wanted to be.

I knew on some level that I had to adapt to this new condition of feeling nothing and caring for nothing, by doing something. I decided to lie in bed for a week and think about things. So, I did. I lay in bed and thought about it. I ate buttered Top Ramen and endless slices of cucumber and drank Lipton tea. I thought about all the things I’d wanted to do—had secretly thought about doing, but hadn’t, for whatever reason. The memories of my life played back like an old black and white reel of film, one memory after the other turning over in the secrecy and silence of my mind.

After several days of rest and quiet, and seemingly out of the blue, I felt compelled to begin painting–again. The thought was the remaining shard of a dream I’d had since I was a teen, since I was sixteen to be precise. But I had been too fearful to pursue painting in my adulthood, and had repressed the desire for decades for the simple reason that my father had told me I wasn’t talented enough. The year I turned sixteen, in 1982, I tried to paint the face of a woman. A portrait of a woman with black hair and green eyes, (probably my mother) and when he saw it some weeks later, my father told me it looked “schizoid.” I thought it was fairly good, but I could instantly feel and hear the disappointment, and the disapproval in his voice, which was something my father often communicated to me. Something shut down in me when he told me the woman looked “schizoid” and I never picked up another brush again.

My father was long since gone by then, and so too, I hoped were my unresolved feelings about him. He loved me, like he loved all of his children, and I know he did the best he could. I didn’t want to blame him for anything anymore, but I did want to undo something he created in me, which I found to be a reticence about taking chances. Ultimately, overcoming that reticence expressed itself in my desire to begin painting, again. But to begin painting, I had to crush the idea that I could never do it, because I wasn’t talented enough. I had to crush the memory of what my father had said to me.

And so on my own, and without telling anyone, I began to paint. After many years of thinking about painting, I just decided I’d do it. I began buying books on painting and supplies, and I slowly discovered that the act of painting was like restoring an empty watershed to its original state of beautiful fullness and plentitude.

In time, just as I had lost the ability to feel anything or connect with people, the act of painting altered that. By teaching myself to paint, I learned to reconfigure myself and somehow the watershed inside me was no longer barren, somehow it became replenished.

As a poet and a writer, the world of letters can be exacting and unforgiving. There is little joy in writing, though a day cannot go by that I don’t write. But writing has left me draped across my desk, my face awash in tears, or so engrossed in rage, my fingers become numb as they furiously work the keyboard. It can at times make me feel vindicated, but writing rarely brings me joy.

Writing exhausts a known part of my mind that I am intimately familiar with. But when I pick up a tube of rich cream paint, or hold a brush in my hands, dripping with color, I am transformed and transfixed, and the process feels very nearly unconscious. It’s never something I’m aware of at the time. Only later do I see how fluid and mysterious the process is—the process of creating with paint and how it restores, empowers, and gives you your water back.

The rich heady smell of the creamy oil paint, heavy with linseed, poppy seed, and walnut oil, slowing expanding from the Liquitex tube, the sharp almost floral scent of the liquid acrylic paint as I pour it into the metal tray, the sting of the Isopropyl alcohol on my cracked hands as I fling it on the large canvas, the sense of burgeoning expectation as I watch the organic shapes expand on the canvas, distorting the paint in ways the brush cannot—it brings something back to me, it changes me, it restores the watershed within me. It makes me feel.

Dolce, Jessica. “The Dark Side of Empathy: When Too Much Turns Into None.” Classes, Coaching and Compassionate Badassery for Animal Care and Welfare Folks. November 2018. https://jessicadolce.com/the-dark-side-of-empathy-when-too-much-turns-into-none/ (Accessed February 2019).