Artical republished by permission of www.mantraya.org

The recent Trump administration’s refusal to extend the waiver it had granted to eight countries including India and China from stopping the import of crude oil from Iran, has yet again put New Delhi’s Tehran policy in a serious quandary. India and Iran have shared long historical relations which are now being tested. Given India’s heavy reliance on fossil fuels, import of oil from Iran has remained the cornerstone of Indo-Iranian relations for past several decades. Moreover, both countries have a lot in common in their outlook towards a range of issues including Afghanistan. In the face of the U.S. sanctions, will New Delhi be able to maintain its long standing relations with Tehran? Or will it look for alternate partners in a delicate regional balancing act?

On 22 April, President Donald Trumps’ administration refused to extend the waiver it had granted to eight countries including India and China from stopping the import of crude oil from Iran.[1] In November 2018, U.S. President Donald Trump withdrew from the 2015 Iran nuclear deal and re-imposed broad economic sanctions. New Delhi, along with seven other nations had been given a six-month waiver to import 300,000 bpd or nine million barrels of oil a month from Iran until early May. New Delhi has made statements indicating that it will fall in line and has plans in place to diversify its oil imports.[2] Irrespective of whether it succeeds in its endeavor and the impact it can have on its economy, New Delhi’s relations with Iran is all set to encounter some serious challenges. 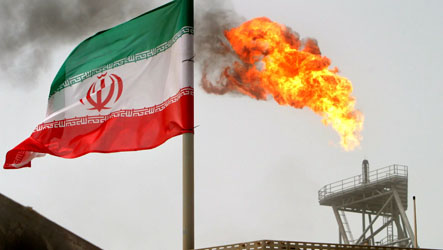 According to OPEC’s World Oil Outlook 2040, India’s oil demand is projected to reach 9.9 thousand barrel of oil equivalent per day (mboe/d) in 2040, from 3.9 mboe/d in 2015. The report estimates oil to continue to remain the second largest source of fuel for the country, with its share increasing from 23.2 per cent in 2016 to 25.2 per cent in 2040. Similarly, the BP Energy Outlook 2018, published in March 2018, estimates global oil demand to reach around 109 mb/d by 2040 with India replacing China as the primary source of growth for oil demand. The report estimates India’s crude oil demand to reach 485 million tonne of oil equivalent (mtoe) by 2040 from 212 mtoe in 2016.

Because of India’s heavy reliance on fossil fuels, import of oil from Iran has remained the cornerstone of Indo-Iranian relations for past several decades. India is Iran’s second top oil client after China. Prior to the US sanctions, New Delhi imported over 600,000 bpd of oil from Iran. Since November only state-run Indian Oil Corp, Bharat Petroleum Corp, Hindustan Petroleum and Mangalore Refinery and Petrochemicals have been buying Iranian oil. In April 2019, Indian state refiners lifted 8 million barrels of Iranian oil, a decline of about 12 percent from the previous month.[3] However, Indian refiners held back from ordering Iranian oil for loading in May pending clarity on whether Washington would extend a waiver. New Delhi has been preparing for the worst.

(i) Indian-Iranian agreement of November 2018:It has attempted to bypass the sanctions by entering into a rupee trade agreement with Iran in November 2018.[4] According to the agreement, New Delhi can pay for fifty percent of the import of Iranian oil using a rupee-based payment mechanism. The other fifty percent of those payments will be used for exporting items to Tehran. Two Indian banks- UCO Bank and IDBI Bank- were identified to route the payment as the two have no exposure to the US financial system. However, rupee trade by itself can only be ad hoc and is not a sustainable arrangement. India has a trade deficit with Iran. Bilateral trade between India and Iran increased to US$13.8 billion in 2017-18 from US$12.9 billion in the previous fiscal year even as India’s exports were only worth US$2.5 billion to that country.[5] This means that since Tehran is not buying that much from India, it can hardly use the rupees it is now getting for its crude for anything else than for paying for the products and services of Indian companies.

(ii) Oil Refinery in Tamil Nadu:The US sanctions exposes India’s other vulnerabilities, as well. Naftiran Intertrade, the Swiss subsidiary of National Iranian Oil Company, holds 15.4 percent stake in the Chennai Petroleum Corp. Limited (CPCL), which is one of clients for Iranian crude in India. The CPCL had plans to invest up to US$5.1 billion to replace the 20,000 bpd Nagapattinam refinery in Southern Tamil Nadu state with an 180,000 bpd plant.[6] The refinery is expected to be operational by 2023-24. It is not clear if the investment can go ahead or will have to be put in the cold storage for the time being.

India’s second strategy has been to diversify its sources of crude. In its reactions to the end of the waiver, India’s External Affairs Ministry indicated that it has a ‘robust plan’ in place to ensure continued supply of crude from different parts of the world. Experts, however, have termed this ‘plain sophistry’[7]. Its optimistic tone notwithstanding, no country would provide India oil at the highly concessional terms supplied by Iran. Buying oil from the spot market has always been an option, but this would significantly increase India’s import bill. New Delhi has indeed increased its energy investments in the Arab world. India’s state-owned oil company ONGC Videsh has acquired a 10 percent stake in an offshore oil concession in Abu Dhabi for $600 million. However, such measures would not be adequate to lessen burden on the common man, when the increase in oil prices would eventually be passed on to the customers in India.

One possible reason why New Delhi has decided to abide by the sanctions without a murmur of protest is the US assurance that the Chabahar port project in Iran, which is of importance to India and Afghanistan would not be impacted by the sanctions.[8] India values its relations with the United States and has been assisted in its counter-terrorism goals by Washington. However, in return for the American gestures of acting against the Pakistan-based terrorist leader Masood Azhar at the United Nations despite Chinese objections, New Delhi is expected to comply with the sanctions.[9] Amid such diplomatic tightrope walking, New Delhi can only hope that it can find a way to maintain its political relations with Iran.

Both India and Iran have a lot in common in their outlook towards a range of issues such as Afghanistan. Both are opposed to the return of the Taliban to the seat of power in Kabul. In September 2018, India, Iran, and Afghanistan held the first-ever trilateral meeting in Kabul during which implementation of the Chabahar port project and an array of other issues were discussed, including ways to deepen counter-terror cooperation. In February 2019, Afghanistan sent its first export shipment to India through the Chabahar Port.[10] In the same month, Iran joined India in criticizing Pakistan for sheltering terrorists being used to carry out attacks on their territories.

India’s growing relations with Middle Eastern countries such as Saudi Arabia, UAE, and Israel have posed challenges to maintaining a steady relation with Iran. Over the past five years, New Delhi has aggressively pushed for investments from and counter-terrorism cooperation with Riyadh and Tel Aviv. India’s relations with UAE too have improved. During his maiden trip to New Delhi in February 2019, Saudi Crown Prince Mohammed bin Salman announced, without revealing details, the possibility of investment opportunities worth US$100 billion in India over the next two years.[11] Security ranks high in New Delhi’s strategy in the Middle East region. In Israel, India has found a willing partner to supply sophisticated military technology. Between 2012 and 2016, India received over 40 percent of Israeli military exports.

While India may not have ignored Tehran completely, its efforts to solidify political relations with that country have almost been negligible compared to the efforts it has put up into the Arab world. For long, India pursued a balancing approach with Iran and countries like Saudi Arabia and Israel. This policy has undergone significant changes in recent times. This is curious as Iran remains critical not only for India’s policy in Afghanistan, but also for its counter-terrorism efforts. With this backdrop, reducing oil imports from Iran to zero takes away much of the substance from the already withering bilateral relations between the two countries. To expect the Chabahar port project alone to sustain the relations between the two is at best impractical.

While China protested against the end of waiver and vowed to continue importing crude from Iran, India’s silent capitulation to the US sanctions has surprised many analysts. Nevertheless, the possibilities of a Beijing-New Delhi common outlook and possible joint action to resist the American pressure has been talked about. However, that is easier said than done. New Delhi’s economy is yet to reach the kind of inter-dependency that the US and Chinese economy have. At best, New Delhi can hope that the sanctions will be temporary.

Lessons from history point to the fact that the hope for a collapse of the Iranian regime or its capitulation as a result of the sanctions are strategically delusional. Previous sanctions have failed to achieve the desired outcome simply, because the US had neither the capacity nor the requisite backing from the international community. This time, President Trump is trying all means to compel the international community to comply. Till the time he discovers the limits of this move, New Delhi’s ability to maintain its historical ties with Iran will be tested.