Article republished by permission of http://mantraya.org 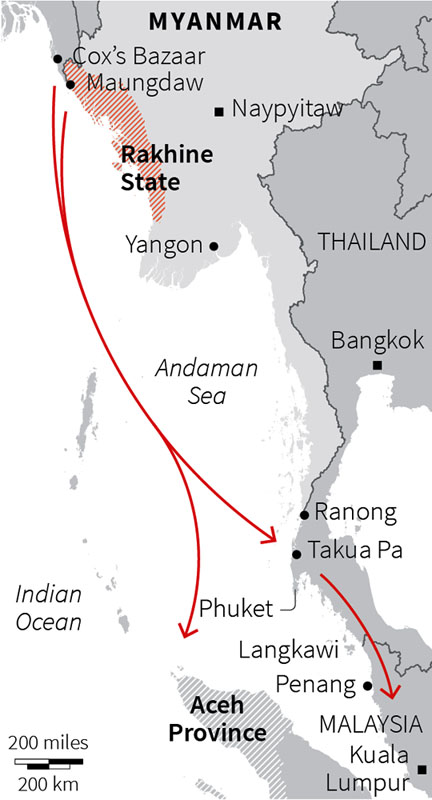 Over a million Rohingya refugees live in camps located over 6000 acres in Bangladesh’s Cox’s Bazaar area. Most of these refugees face a bleak future and have given up hope of ever returning to their homes in Myanmar. Organised trafficking syndicates, worth millions of dollars, have sprung up with networks in Myanmar, Thailand, India, and Malaysia. With the promise of jobs and a better future, these refugees are being trafficked to Malaysia for a hefty amount. Only a section of these refugees, however, reach their final destination. Many others drown to death at sea, are killed, tortured and raped by the traffickers, who have an intimate profit-sharing nexus with the authorities in many of these countries.

Over a million Rohingya refugees from Myanmar have been living in the camps in Cox’s bazaar of Bangladesh for close to two years. With no access to jobs, education and health care, these vulnerable refugees are becoming victims of a new wave of human trafficking to Malaysia. In 2015, Malaysian authorities discovered elaborate syndicates specializing in moving refugees from Myanmar and Bangladesh through Thailand to Malaysia. A clamp down by Malaysia and Thai authorities followed forcing the syndicates to lie low. Incidents beginning the latter part of 2018, however, suggest that the syndicates are active again. This time, their operation, worth millions of dollars, is much more complex and spans across at least five countries. It will take nothing short of a regional cooperation mechanism to address the issue, and a strong international commitment for early resettlement of the Rohingya.

In 2015, Thailand found bodies of Rohingya from Myanmar and Bangladeshis at makeshift camps along the border with Malaysia. The Malaysian authorities too discovered over 150 graves and dozens of camps. In one particular camp in the northern state of Perlis, they discovered wooden cages and lookout posts, as well as graves and a stretcher to carry dead bodies.[1] These discoveries brought to light the fact that Rohingya and Bangladeshis were arriving in those camps by sea and were being held in appalling conditions before being released. The discovery prompted the Thai authorities to crack down on traditional sea routes for illegal migrants coming to the country. This triggered a crisis as smugglers dumped hundreds of refugees off the coasts of other countries and fled. Estimates suggest that 25,000 people who attempted to cross the Andaman Sea for Thailand, Malaysia and Indonesia on unsafe and overloaded boats had drowned. Nevertheless, the scale of trafficking nosedived. A public inquiry by Malaysia into the findings began only in April 2019.

Pattern-trend Analysis of the Trafficking Syndicates

A new wave of trafficking appears to have begun in late 2018 and peaked by early 2019.  In April 2019, 47 Rohingya men ranging from 14 to 30 years landed at Sungai Belati beach in northern Malaysian state of Perlis and were detained by the authorities. Previously in April, 35 migrants had landed in the same location. Malaysian authorities said that boats carrying another 200 are believed to be at sea.[2] Reports of this nature, of these perilous journeys by desperate Rohingya, continue to appear in the media. Many of these reports have quoted men and women who undertook such journeys and survived to reach Malaysia. Monitoring of such reports provides an understanding into working of these syndicates comprising agencies spanning across Bangladesh, Myanmar, Thailand, and Malaysia.

Traffickers, who promise to take a refugee to Malaysia, are typically paid upfront 4,000 Malaysian ringgit (approximately US$976.80) or equivalent sum per person. There are evidences to suggest that the syndicates that roped in Rohingya men as their ground-level contacts to shortlist vulnerable persons from the camps. Refugees often use all their savings to make such payments. However, for those who cannot pay the total amount and have some contacts or relatives in Malaysia also become a part of the journey by making a part payment. These journeys typically start in larger boats with hundreds of Rohingya either from Myanmar or Bangladesh and once in Thai waters, they are transferred to smaller and crowded vessels. Those who have made the entire amount are dropped off a kilometre off shore, from where they walk into Malaysia. Those who haven’t made the payment or have paid only a part, are held back in the makeshift camps and lodged in wooden cages to prevent their escape. Telephone calls are made to their relatives in Malaysia to arrange for the payment. Those who have been paid for are allowed to go. Many of those who can’t arrange money are tortured without food. Women are raped. Not many survive such atrocities and end up in the graves dug around the camps. However, given the unwelcome publicity such camps and graves have generated, the traffickers are now focusing on refugees who can pay upfront.

Additionally, traffickers roaming free in the refugee camps in Bangladesh are now trafficking young girls and women, and sending them to Malaysia. Promises are made to find them work in that country. This is an attractive offer for many and opportunity to escape from the wretched conditions in the camps. In mid-May, Bangladeshi authorities prevented 69 people most of whom were women from being sent to Malaysia in boats.[3] In the same month, another group of 23 Rohingya girls, aged between 15 to 19, were rescued from a residence in capital Dhaka. They had been brought from the camps in Cox’s Bazar and were to be flown into Malaysia, possibly for prostitution or child marriage.[4] Four traffickers were arrested and the girls were sent back to their camps. Bangladeshi authorities say that they have stopped 300 Rohingya from leaving the camps, in 2019 (till early May) alone. Many others have attempted to procure Bangladeshi passports to fly out to middle-eastern countries.

The fact that these traffickers are no petty criminals, but a part of the organized crime syndicate with access to weapons was revealed from an incident that took place on 15 May. Acting on a tip-off, Bangladesh police clashed with a group of traffickers who opened fire on them near the refugee camps. While some traffickers fled, two traffickers who themselves were Rohingya, were injured and subsequently succumbed to their injuries.[5] The fire and money power of these groups would invariably increase over time, so is the prospect of their nexus with the local authorities, posing an increasing challenge on the capacities of the local law enforcement agencies.

The prospect of making money have also brought in a local group of con-traffickers in Bangladesh into play. They are not part of the trafficking syndicates and are essentially local players. They enter into agreement with the refugees for transporting them to Malaysia for a much cheaper rate, ranging from US$500 to US$600. However, instead of taking them to Malaysia, they use small boats to drop the refugees at Narikel Jinjira or Coconut Island, a remote coral islet of Bangladesh. For these refugees, who have been robbed off all their money, it takes another boat ride, costing US$6, to return to their camps in Cox’s bazar. In May, 54 refugees- 32 men and 22 women- were victims of such con-traffickers.[6]

Malaysia is not just becoming the destination choice for Rohingya from Myanmar and Bangladesh, but also, albeit in a trickle, from India. The route through India, which involves air travel, is comparatively expensive and hence, is unattractive for a lot of refugees. In February 2019, seven Rohingya including two women were arrested at Hyderabad airport while attempting to fly out to Malaysia on fake Indian passport. They had reportedly entered India in 2013. A sister of one of the women who is already settled in Malaysia urged her to come over to seek a good life.[7] The group then approached a gang which specializes in making fake voter IDs and other documents. While this group was unfortunate to have come under the scanner, police in Hyderabad did not deny the possibility of Rohingya refugees managing to escape adopting similar modus operandi on previous occasions.  Another group of a 12 Rohingya, including eight women aged between 16 and 22 and four boys were detained in Mizoram state in May.[8] They had entered from Bangladesh without any valid travel documents and were probably being trafficked to Malaysia or Taiwan, according to the Mizoram police. Modus operandi of the traffickers was to keep them with a local host- in this case a Mizo woman- before moving them elsewhere.

A working paper[9] by the Humanitarian Policy Group in 2016 said, in Malaysia a Rohingya earned half of what an average Malaysian would earn, had to set aside a significant sum of the salary to pay bribes to police, and constantly faced arrests and deportation. Still, compared to the life in the refugee camps, the quality of life was far better in Malaysia. Jobs in factories, construction sites, restaurants are available. Some set up small stalls and some became garbage collectors. Those who can’t find a job, beg on the streets.

In May 2019, arrest of two Rohingya in Malaysia on terrorism charges is one of the first such incidents to have been reported. Part of a four-member terror cell, a 20-year-old Rohingya man admitted to be a supporter of the Arakan Rohingya Salvation Army (ARSA) terror group. According to Malaysia police, he had planned to attack the Myanmar Embassy in Kuala Lumpur. No information was provided by the police about the second arrested Rohingya. Both were detained Kuala Lumpur. Other Rohingya community leaders have raised doubts about the authenticity of the report and have even questioned whether the arrested men were Rohingya at all. Even the ARSA has refuted the report. It tweeted that it “only legitimately and objectively” operates as an ethno-nationalist movement within Myanmar and that its activities would not transcend beyond the country.[10] It is difficult to verify whether the arrested were indeed Rohingya and had connections with terrorists. It is also not possible to conclude if it is a strategy by Malaysian authorities to put a halt to the mass migration of the Rohingya.

Reports suggest that the conditions of the camps in Bangladesh have considerably improved. International donors and aid agencies have been generous in providing financial assistance to improve the living standards in the camps. However, it is also true that these camps, bereft of access to livelihood, will never become permanent homes for the refugees, who will continue to make desperate attempts to leave. This chronic desperation will invariably be exploited by the human trafficking syndicates, extremists, and other elements. A regional crackdown involving Bangladesh, Thailand, and Malaysia may halt the trafficking temporarily. But as long as the push factors remain unaddressed, vulnerability of the refugees would continue. The root of the problem invariably lies in Myanmar and its steadfast refusal to ensure repatriation of the Rohingya. Time and again, Myanmar has come up with flimsy excuses to halt any such move. It is important that the international community addresses the problem and devises a framework which ensures that the refugees return home. Anything short of that would amount to treating the symptoms, rather than the source of the problem.

[3] “Bangladesh police “rescue” dozens of Rohingya being trafficked to Malaysia”, Reuters, 14 May 2019, https://www.thehindu.com/news/international/bangladesh-police-rescue-dozens-of-rohingya-being-trafficked-to-malaysia/article27124362.ece. Accessed on 3 June 2019.