Parama Sinha Palit is a scholar of international relations based in Singapore. She specializes in studying the roles of communication and culture in public diplomacy, soft power outreach and foreign policies of various countries, particularly Rising Powers like India and China. Her book Analysing China’s Soft Power Strategy and Comparative Indian Initiatives (2017; Sage) examines contemporary soft power strategies of China and India and their outcomes. Her later work looked at similar comparative dimensions of Chinese and Indian engagement in Southeast Asia. Parama’s current research combines theoretical and applied strands of international relations and communication studies in exploring the role of new media in external communication of the Indian state. She is an Adjunct Senior Fellow with the Rajaratnam School of International Studies, Nanyang Technological University (NTU), Singapore and an affiliate researcher with the Swedish South Asian Studies Network (SASNET) at University of Lund. 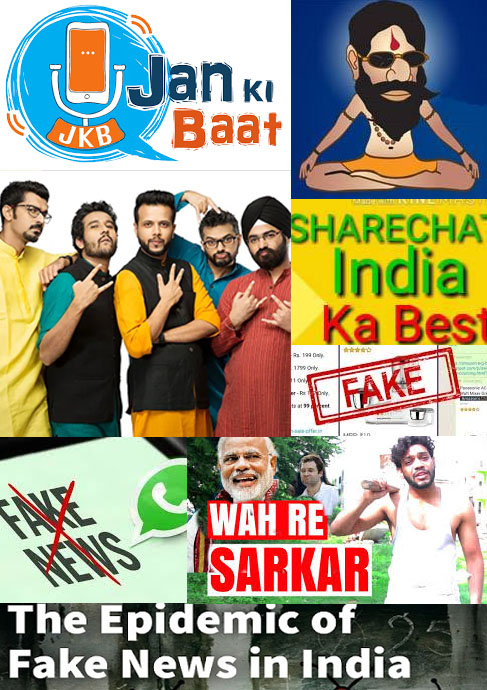 Since politics involves conflict among those with differing preferences and clashing interests, it is important that all are heard, and all views considered, making political voice a key element of functioning democracies. While mainstream political voices are imperative, it is the alternate voices which actually define ‘free’ nation states. These alternate voices of discursive participation[1] try to counter possibilities of domination while communicating people’s expectations and concerns to authorities both in power and outside. Alternate voices assume great importance in modern political milieus like that in India shaped by the new media, and where many social media users are likely to get politically involved and act politically (http://assets.press.princeton.edu/chapters/s9685.pdf).

With the Indian elections underway for constituting the 17th Lok Sabha (Lower House of the Parliament) and four State Assemblies (Andhra Pradesh, Arunachal Pradesh, Odisha and Sikkim), the interplay of contrasting and distinct alternate voices through social media platforms is prominently visible. Democracy and elections have been an important part of the Indian state since 1947 when India became independent and embraced adult suffrage — the ‘biggest gamble in history’ (https://www.thehindu.com/thehindu/mag/2002/02/03/stories/). India’s participatory political system, since inception, has moved center-stage as an exemplar of and a worldwide advocate of democracy. With 900 million Indian citizens casting votes in the elections that are being held in seven phases over six weeks, the robustness of the world’s largest democracy is truly visible. However, such visibility should not undermine the challenges Indian democracy faces from the emergence of digital technologies and a digitally empowered population heavily engaged in social media.

Social media platforms like YouTube, Facebook (FB), its messenger WhatsApp, Instagram and Twitter have expanded public political space, compelling leaders to move closer to people and making them more accountable. The same technology that has led to the growth of these social media platforms in India has bestowed more power to India’s civil society that now has an enlarged role in the political landscape. While analysts like Putnam argue this form of civic engagement is on the decline with individualism becoming the predominant culture in modern societies[2], India appears to be an exception. Earlier in the decade, in 2011, new technology enabled civil activist Anna Hazare to successfully lead a nationwide active anti-corruption campaign highlighting the reach of social media. Both Twitter and FB were responsible for translating online support into offline action (e.g. street protests) during the time underscoring the role of social media platforms in empowering India’s civil society and social activists. Subsequently, social media has become a major tool for communication for both political leaders and individuals.

Alternate voices comprise quite a few digital start-ups. Start-ups like Neta enable voters to rate local leaders and politicians and even revise votes, if they so wished, based on their performance. Piloted during the by-polls in the northern Indian state of Rajasthan’s Ajmer and Alwar constituencies in February 2018, it uses a combination of Artificial Intelligence (AI), one-time password (OTP) and Aadhaar numbers (a 12-digit unique identity number for individuals with biometric details) to ensure voters rating leaders are bonafide. Similarly, the homegrown ShareChat available in 14 different Indian languages is another app that aims to offer alternate political views mostly to non-English speaking audiences in smaller Indian towns and cities. In a country with around 600 million young people, online portals like Youth ki Awaaz (Voice of the Youth) – claiming to be a ‘social justice media platform’ and resonating concerns and perceptions of a young India – are extremely popular.

Social media’s increasing traction in India’s political landscape has seen start-ups and homegrown apps being complemented by digital journalism initiatives. While BOOM and AltNews are committed to bringing verified facts – as opposed to opinions to readers – Jan ki Baat (Conversation of the People) shapes opinions and connects people on public issues, highlighting achievements (or lack of it) of political leaderships. IndiaSpend is another initiative utilising open data for analyzing political developments and providing the ‘true story’ to citizens for assessing leaders. Factchecker.in, launched by IndiaSpend, is another dedicated fact checking initiative examining statements and assertions made by those in public life for both accuracy and context for public consumption.

A study by Oxford University in July 2018 mentioned India as one of the 48 countries where political parties engage in  “social media manipulation campaigns” (https://www.outlookindia.com/magazine/story/how-is-the-fake-news-factory-structured/300965) and fake news dominates the political discourse. The finding points to the great salience of responsible alternate voices, such as the initiatives mentioned, for apprising citizens with alternate views on political and religious issues in a country divided deep on sectarian and religious lines. With fake news found responsible for unfortunate incidents like mob-lynching in India due to religious intolerance, objective and balanced communication on religious issues is critical. Hopefully, this will be effectively performed by the fact checking websites fighting fake news.

Many other independent voices exist in India’s large political space. YouTube, which is the most popular social media platform in India with around 250 million subscribers, has been employed by Dhruv Rathee, a solo operator ‘to educate people’ on political developments and fight fake news. Other blogs like Politicalbaaba, The East India Comedy Company and Wah Sarkar, are efforts by individuals and groups to offer online voices on Indian politics, including elections. Interestingly, both The East Indian Comedy Company and the Wah Sarkar uses satire to comment on India’s political system. While the former is a group of stand-up comedians maintaining a dedicated YouTube channel for their acts and performances on various political issues, Wah Sarkar is an apolitical blog attempting to provide balanced insights.

India’s new media landscape has become remarkably alive with the ongoing General Elections and the tussle between genuine and fake voices to influence the political discourse. Social media is being vigorously employed by political parties for wooing voters, particularly the 84 million 1st time voters in India. According to a survey conducted by the Twitter ahead of the elections, over 80% of the first time voters in India surveyed rely on social media for domestic and international political news (https://www.hindustantimes.com/lok-sabha-elections/lok-sabha-elections-2019). In this backdrop, where political parties and their leaders are incessantly and unabashedly using social media for electoral gains, the presence of alternate voices in shaping an objective discourse is essential. They are pivotal to maintaining the robust and unbiased character of Indian democracy for enabling informed choice of candidates by citizens – something which several political parties, leaders and interest groups seem determined to disrupt through circulation of fake news and false information

[1] Discursive participation happens when citizens come together with others in formal or informal settings—face-to-face or via the telephone or the Internet—to discuss local, national, or international issues.

[2] Hologram technology and GPS were extensively employed in election campaigns for political outreach.