N Bhaskara Rao is Founder–Chairman of Centre for Media Studies (CMS) and also Founder–Chairman of Marketing and Development Research Associates (MDRA), a prestigious market research and forecasting outfit. He is a pioneer in social research in India and an eminent mass communication expert with over 40 years of distinguished background. Earlier, he had built up Operations Research Group (ORG) as its CEO. Dr Rao was also an expert member of government’s high-level committee to draft National Population Policy with Dr M. S. Swaminathan and an expert-member of the committee to reorganize media units of Information and Broadcasting Ministry under the chairmanship of late G. Parthsarthy. Earlier, he was also involved as a member of a high-level Standing Advisory Committee of the Information and Broadcasting Ministry. Some of his works include Controlled Mass Communication in Interstate Conflicts (1970), India 2021 (1985), Marketing Communication: Perspectives into 2020 (1995), and Social Impact of Mass Media (1996). 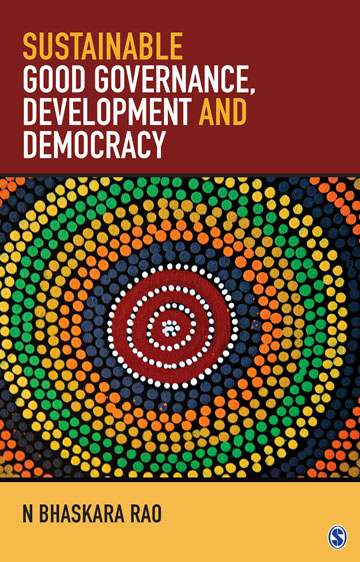 At a time when political leaders are competing with claims of “good governance”, here is a book based on fifty years of research insights that suggests that good governance is not even understood what it is all about.  The book explains how governance is different from the government.

The book reminds that unless the Governments are viewed as of all people and parties, (instead of a party which had won a poll) there cannot be good governance. The book calls for a debate on proportional representation system of elections. It contends that no change can be expected in our polity and development paradigm without drastic decline in poll expenditure.

In a democracy governance is sum total of what the Government does over time and how other stakeholders take it or respond and with what impact and implications. More citizens are stakeholders in a “governance” scenario than the number involved in or concerned with the “Government” of the day. Political leaders tend to talk of good governance as if it meant “achievements” of the Government of the day.  Good governance cannot be an outcome of a one term (or may be even more) of a party in the Government based on some popular programmes described as flagship. Good governance has to be viewed in a long term context. If “WE the people” are not sensitive to differences and characteristics, how do we expect to accomplish what we envisioned in the Constitution of our Republic. That process is what I tried to discuss in this book.

Political leaders in power claim “good governance” even when the Government was a year or two old as if good governance means Government announcing a couple of relief or welfare schemes. Such a tendency recently has anguished me and made me to wonder about limited perspective of our leaders and lack of a futures outlook.  But then such a naive view now is not limited to political leaders but also the news media and other key sections engaged in public policies.  Leaders tend to think in simplistic terms like one nation, one election and even one leader!? Their view more often is that Government of the day being stable or decisive or being popular is good governance. The realisation that civic society matters for success – failure and fate of development endeavours is a more recent phenomena. But that remained a poll time rhetoric at the most.

Unless there is wide spread sensitivity what this good governance is all about, we continue to remain in a quandary about development also. That is how I thought I should bring together my own insights based on my fifty years of public policy pursuit (with a futuristic concerns). And initiate at least a debate to ponder ourselves as to why seven decades of experiments in parliamentary democracy, development model and preaching decentralisation have not lead to cherished goals.

In nutshell the book contends at the outset that Republic of India although has come a long way, on social sector the scenario calls for a critical view and perhaps for a shift in the very approach and model itself.  The book maintains that unless decentralised outlook is evident in the instruments of governance with a bottom up approach (in public policies) it amounts more of the same of the past. More specifically, states should be restored to their position in a federal framework. It suggests that the republic (pillars of the state) should be looked from much beyond three pillars view –the judiciary, the legislature and the executive.  Apart from the fourth pillar or estate of media, even the civil society be viewed and considered as the fifth pillar.  And that only then a breakthrough is possible in our development saga.

Good governance claims of political leaders need to acquire meaning and seriousness. A combination of rights regime in an era of transparency and citizen activism with proliferation of newer technologies offers better scope for good governance today, if only we could consolidate the trends. Transformation of India requires hard and radical decisions beyond economic terms. The book suggests more than a couple of immediate minimum correctives needed in the case of each of the pillars of the state for an overall effect and making the difference. And that is possible with a beyond election centric view and a futuristic perspective. We need to get out of elections-only democracy. How can we? Governance is much maligned rhetoric today. Some clarity and understanding about good governance is needed not only among political leaders but also among news media and civil society.  This book does not claim describing all about good governance or even define it fully. But an attempt is made with a hope it paves way for a serious public discourse.

The author, concludes that even by 2050 when “India at hundred” will not realise its basic democratic-development goals going by-and-large “more of the same” approach. To catch up, the author suggests 45 interventions in all in political parties, polling practices in primary education and in the functioning of legislatures, judiciary, executive and media.  No significant changes could be expected in the country even when the Republic completes hundred years in 2050. If 16 general elections could not help achieve national goals, how next six are going to? Bits and pieces approach to reforms will not yield unless citizen and civil society takes active interest in governance. Will India be able to fulfil its democratic goals in the next 30 years?

Despite seven decades of planned development efforts, there remains disparity in distribution of wealth in India. More than half of the national wealth is owned by merely 1 per cent of the population. In 2050, the Indian Republic completes 100 years. A hundred years should be good enough for a country to accomplish its democratic goals as envisaged by its constitution makers. Will India be able to fulfil its objectives in the next 30 years? Sustainable Good Governance, Development and Democracy addresses this question and argues that this is the time for a forthright perspective of what went wrong and how this should be corrected to make headway in the model of governance, development and democracy in India. The book argues that the three pillars of the State – the legislature, judiciary and executive – alone cannot accomplish these goals. It advocates six pillars, including the news media, civil society and political parties, to work in tandem with each other through a ‘checks and balances’ framework to achieve Sustainable good governance.

In his foreword, Dr Subhash C. Kashyap, constitutional export and a former Secretary-General of Parliament wrote – “Dr Bhaskara Rao’s excellent work covers a wide spectrum, raises many pertinent questions and suggests viable mechanisms for resolving conflicts and ways out from difficulties. I hope this dispassionate voice of sanity would be heard and the book would be widely read.  It should serve as a clarion call to all of us to wake up, introspect and act.”

The author suggests that Prime Minister Modi’s five slogans could as well be the mantras for the country, if only they are taken seriously by political parties and citizen. These are: Swaraj to Suraj, power- not by wooing voters, politics should never override policy, less government, more governance, and sab ka sath, Sabka Vikas. The book suggests a national campaign on these.

This SAGE book was released at India International Centre, New Delhi, by Shri Suresh Prabhu, Union Minister, and by Andhra Pradesh Chief Minister, Chandrababu Naidu, in Amaravati, AP, on January 5, 2019. This is my second book by SAGE on Good Governance (2013). I have been pursuing this theme since my first book in 1967, “Politics of Leadership in an Indian State”. That was in response to a 1964 book by then New York Times Correspondent in New Delhi, Selig S. Harrison “Most dangerous Decades of India”. My forthcoming book in 2019, Rejuvenating the Republic is a follow up to this book.