Against All Odds: Psychosocial Distress and Healing amongst Women by Dr Mahima Nayar

Dr. Mahima Nayar is an independent researcher working in areas of disability, women, children and families. She was previously an Assistant Professor at the Tata Institute of Social Sciences, Mumbai. She has worked extensively with survivors of trafficking (women and children), women facing domestic violence and survivors of sexual assault, persons with psychosocial disabilities and their families. Her educational qualifications include M.Phil in Psychiatric Social Work from National Institute of Mental Health and Social Sciences (NIMHANS), Bengaluru, PhD in Social Sciences from Jawaharlal Nehru University and a Masters in Social Work from Tata Institute of Social Sciences. She was the gold medallist in her M.Phil Programme and a Senior Research Fellow during her doctoral programme. 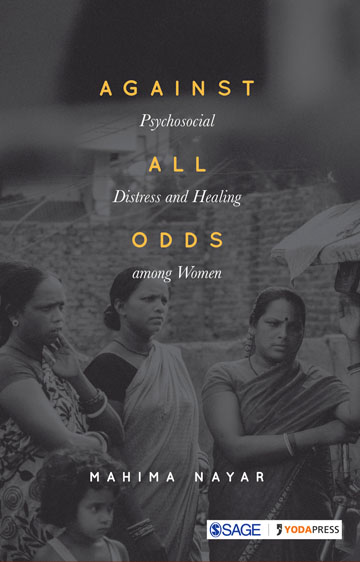 Madness, insanity and mental disorders have been subjects of discussions for a long time. The manner of viewing and understanding them has changed according to the historical period and the developmental stage that a particular society finds itself in. In most eras, it is the voice of the professionals and not the voices of the people who are living through the experience which has dominated the discourse. There is a silence around how everyday routines/patterns and life-circumstances lead to madness or mental disorders. The aspect of distress often goes unrecognized in the larger imagery of ‘mad’ people.  In the twenty-first century where change is occurring at an unprecedented pace, the everyday lives of women are often considered a ‘small detail’ in the larger historical landscape. However, the distress that they face in their everyday lives reveals the link between macro changes and their impact on the day-to-day lives of people. This book attempts to explore the everyday meaning of distress in relation to the larger changes that are occurring.

Distress in this book has been understood as including feelings of sadness, restless, nervousness and hopelessness. Often these feelings get categorised into medical categories without exploration of their social meanings. Being female is reported to be a risk factor for common mental disorders. The social roles and spaces assigned to women create a lot of stress in their lives and thereby the greater prevalence of common mental disorders amongst women. Glimpses of this relationship were evident in the outpatient clinic of a psychiatric hospital where I worked. While working there I met many women whose distress was not high enough for admission but they frequently visited the clinics for medication. None of the medications really seemed to help them. In the short meetings they described several difficulties in their family life ranging from issues related to poverty, health issues and violence. Questions related to social structures and their impact on the individual were emerging in this clinical set-up and there was no space or time to explore this further over there. As a psychiatric social worker being in a hospital setting was easier for me but there was a realization that there was need to move beyond the hospital for finding these answers. So I moved to a community clinic and from there on to the community itself. This study was then designed to explore the extent of psychosocial distress faced by women living in a low-income neighbourhood in Delhi. This book is based on those experiences.

This research explores the linkages between the socio-cultural, political and economic conditions of a community and their impact on the level of psychosocial distress faced by women. To establish a relationship between social structures, women and psychosocial distress, it was important to understand the manner in which psychosocial distress, madness and mental health were defined in the community. Did the class, caste, region of the women have an impact on the understanding of distress? This understanding would remain partial without knowing what the women themselves thought about it. Therefore, exploring the ways in which women perceived and defined psychosocial distress was important. A related objective of the research was to explore whether women considered their distress important enough to seek help and if they did, then what kind of help did they seek. The health care systems and modes of healing present within the community were also explored here.

In order to give a context to understanding of psychosocial distress, this book begins with discussions about madness, neurosis or hysteria among women. It explores different perspectives related to ‘madness’ or ‘mental illness’ and how distress has been viewed as ‘abnormality’ for a long time. It explores psychosocial distress through the ‘medical lens’ as well in the context of prevailing social, cultural, economic and political conditions. Social and cultural space, the concomitant gender regime, urbanization, globalization and their impact on mental health are discussed in order establish linkages between the individual situations and structures present within the community.

I began the book by asking the question: So what is abnormality? In all the interactions with women and men in Jahangirpuri, I found that there are multiple answers reflecting multiple realities. Psychosocial distress is embodied and expressed through the categories of possession and illness experiences. Caste, class and religion may shape and change the terms used for description of psychosocial distress/madness but the experiences appear to be on a similar continuum. This is evident from the growing use of bio-medical idioms to describe conditions of distress amongst women from different backgrounds in Jahangirpuri. Psychosocial distress was related to the substantial changes in the physical structures in Jahangirpuri which have not translated into a better subjective quality of life. Crime rates continue to be high. Constant and continuous sense of insecurity prevails among the women of the area and leads to restrictions (internal and external) of their movements. This internalization of restrictions often leads to feelings of suffocation. Along with a high rate of crime, a high cost of living forms the main macro-issue of concern for women. The everyday lives of women living in the site are marked by problems created by living in a certain social situation and there are many similarities in the experiences of these women. Distress appears to be arising out of similar reasons and leading to similar outcomes (pains, tensions, worries).

Women face frequent emotional, economic and physical violence within the household.  Performance of multiple roles within the household with very little time for leisure or relaxation is increasing women’s psychosocial distress. With the help of narratives, the book brings out the manner in which women perceived their family and societal relationship as being instrumental in impacting their health. There was some recognition of the power dynamics in the societal set up but only some women were able to question and challenge societal norms. The presence of civil society organizations working for women has helped bring about some changes. But these organizations are not seen as ‘legitimate’ sources of help by everyone in the community. Therefore, women seek help mostly from culturally sanctioned spaces. These include traditional or folk healers as well as bio-medical doctors.

It was found that women usually sought multiple sources of help simultaneously. From the interviews, I also found that the traditional or folk healers were considered approachable as they paid more attention to the psychosocial context of the women. When distress was expressed through aches, pains and tension, women sought general medical care. This often led to women being on medication for long periods of time without much change in their situation. Physical and social structures are important in the everyday lives of women and therefore Bourdieu’s concepts of habitus and social space are used in examining this concept of psychosocial distress. The intersections between physical and social space, household organization and psychosocial distress are also explored in the book.

Exploring the relationship between psychosocial distress and social position of women, I found that when women start questioning certain societal prescriptions they are labelled as ‘mad’. It is through the support of other women that a change in power relations has come about. In many ways, it is the women’s movements that have provided secular spaces for women, spaces which have enabled them to seek the support of other women, to help themselves and others, and to explore ways of coping which have empowered them. It is important to recognize the role of both the women’s movement and the cultural ways of healing as they complement each other. Women’s movements and medical pluralism both seem to provide choices for people who are suffering. This research does not negate the importance of psychiatric drugs and treatments. There are many instances wherein these have helped women and their families. But there is a need to exercise caution in their usage and prevent their rampant misuse. Issues of illness and health remain embedded in social decisions and actions, not only in medical decisions about transmission and cure. The complex nature of ‘madness’ or ‘psychosocial distress’ has to be addressed from a variety of perspectives as multiple factors influence it. More data is required on the linkages between poverty and psychosocial distress. Poverty underlies the poor health status of developing world populations, and women represent a disproportionate share of the poor. Furthermore, the cultural and socio-economic environment affects women’s exposure to disease and injury, their diet, their access to and use of health services, and the manifestations and consequences of disease.  In order to understand psychosocial distress in this context, there is need to develop newer models which take into account intersections between the cultural, social and economic realities faced by women. This book explores interactions between individuals and systems and argues that an equitable society is what is required to reduce psychosocial distress. This book would be helpful to anyone interested in gender studies, psychology, anthropology and social work.