Between Worlds, Walking With Shamans Part II by Randhir Khare

Randhir Khare is an award winning poet, artist, writer, playwright, folklorist and distinguished educationist who has published numerous volumes of poetry, short fiction, essays and novels and educational handbooks and has travelled widely, reading and presenting his work, nationally and internationally. He has presented his work at the Nehru Centre in London, at the Ubud Writers Festival in Bali, the India Festival In Bulgaria, at the Writers Union in the Czech Republic, in Bulgaria, Slovenia and at the Europalia Arts Festival in Belgium. In India, he has performed his poetry with various traditional and contemporary musicians and founded (and leads) MYSTIC, India’s first poetry-music band. Randhir is the recipient of The Sanskriti Award for Creative Writing, The Gold Medal for Poetry awarded by the Union of Bulgarian Writers, The Human Rights Award, The Residency Grant 2009 for his  lifetime contribution to literature in English  awarded by The Sahitya Akademi and The Palash Award (for his lifetime contribution to education and culture) among others. 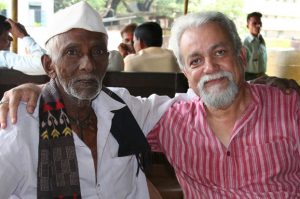 The roar of the Khapri river echoed through the wild wet hills around us, filling the monsoon air with trembling blasts of gravel breath. Dense green foliage formed impregnable walls of jungle on either side of the road. Above, the walls curved inwards and merged with one another. Individual identities had been lost. They had become a single mass of leaf, vine, twig, branch, trunk, flower, fruit, moss, mud, bird, animal and insect. An awesome beast, reeling and lunging in the wind. Swaying to the rhythmic roar of the river.

The jeep struggled down the jungle road, headlong towards a narrow bridge which had become a flowing stream of slush. Occasionally holes in the roof of green, dull grey light would pour in, sometimes, only sometimes, shrinking to a drip. Then the vehicle sank into a ditch, coughed, choked and struggled till it climbed out and went on, only to plunge headlong towards a narrow bridge. Beneath it flowed a wide feeder stream of the river, swelling fast. Soon the jeep was enveloped by an awful gush of muddy water and thrown to the other bank where it teetered on some slippery rocks.

We sat there, waiting to be washed away.

But that didn’t happen. The storm subsided and the stream became sluggish. 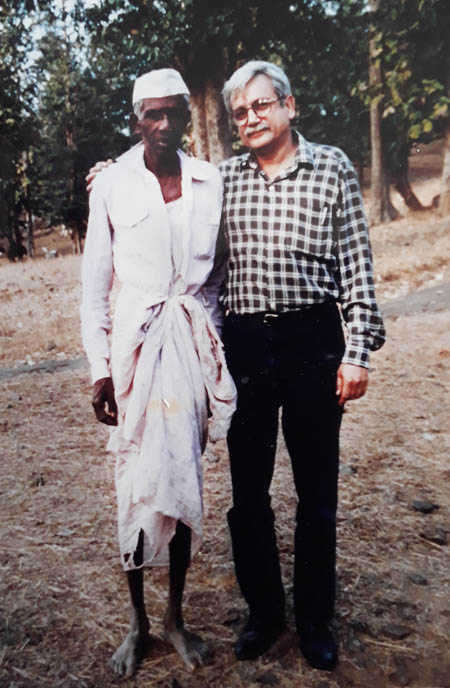 Above us on the embankment stood a lean old man in a white dhoti and oversized white shirt, sheltered under a battered umbrella. “Get out of that jeep,” he called, “get out of that jeep. The storm hasn’t finished. I can’t keep it quiet for long. It will return and the water will carry you away. Get out of the jeep.”

In the midst of all that wildness, he seemed an apparition, an unreal being who had suddenly materialised. Rather than argue, we climbed out and scrambled up the slope.

That was my first meeting with Janu Kaka, the Bhagat (Shaman) of Dhavalidod.

He very quickly took charge of the situation, organised a few men from his village to haul the vehicle out on to the road and had it covered with plastic sheets. “We’ll deal with it in the morning,” he said quickly. “Now you need to dry yourself or you’ll die in this weather.”

We followed him back to Dhavalidod and spent the night on a cool dry cow dung smeared floor, covered with sacking cloth. Late into the night when my teeth started chattering, he asked me to sit up and gave me a warm thick soup in a small bowl. It tasted like vomit. “Finish it quickly. Then chew these leaves.” He handed me a green paste.

In less than half an hour, I could feel my body beginning to warm and some time later, the heat was unbearable. I perspired profusely. Lying there, I looked out into the night which was filled with fireflies. They passed the open door in streams, whirls, swirls, appearing and disappearing. Some seemed larger than others…they glowed like tiny orbs. I sat up and watched the display.

“You must rest now,” I heard him say from somewhere inside the house. “Rest.”

I stood at the door for a while and then walked out. He was soon beside me, sitting on an old wooden bench. “You are a restless spirit. You need to check that.”

“Check what?” I wanted to know.

“Your restlessness. If you go on like this, you will never be a satisfied person. You’ll always want to 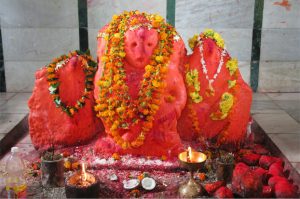 be somewhere else. That doesn’t help.”

“You don’t know me so you’ll think I am talking nonsense,” he said quietly.

“Ok, let’s say I don’t think you are talking nonsense. So say what you like.”

He laughed softly. “But I DO know you. I didn’t meet you by accident. You didn’t come here by accident. It’s part of a plan. Your restlessness brought you here. You need help.”

“You need to cure your restlessness.”

“Because all your ailments are brought upon you by this restlessness. Your stomach problems for example.” 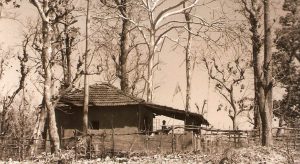 “What about my stomach problems?” He was beginning to irritate me. His knowingness unsettled  me. “I think I should sleep now.”

“I think you should slow down.”

“I AM SLOWING DOWN. I AM GOING TO SLEEP.”

He placed a bony hand on my shoulder and patted it. “Good. Slow down. When you lie down just now, lie on your back with your hands on either side of you, palms facing upwards – open. Feel your breathing.”

I had had enough of his ‘wise’ counsel and lay down on my left side and shut my eyes. A while later, I felt myself choking. My breathing came in short quick leaps, back and forth. So I turned on my right side and started feeling a sensation of burning in the pit of my stomach. It rose quickly to my mouth which was soon filled with a foul bitterness. I stumbled up and stepping out of the open door, let loose a stream of unwanted bile, then returned to lie down – on my back, following Janu Kaka’s instructions. 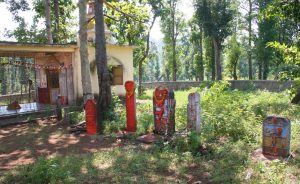 The refurbished sacred abode. In the foreground stand vaghdev plaques of earlier times.

My body lay there rigidly for a while, almost as if I was uncomfortable about it being in contact with the earth. As my breathing became increasingly calm, I felt my body  beginning to relax…and as it relaxed, it became more receptive to the gently throbbing energy that the earth expressed. In that rise and fall, I rocked to sleep. Outside, the monsoon jungles heaved and shivered and the air breathed fireflies.

Unlike the Shaman Nathu Baba who was a Spirit Healer, Janu Kaka was a Physician. He tended to the needs of the body and knew HOW to use the elemental powers of Nature to heal the body. “This is not Ayurveda,” he once told me. “Yes, I do use roots and bulbs and leaves and bark and fruits and seeds and a lot else – but its NOT JUST THAT. The power lies in HOW I use them, WHEN I use them, WHERE I use them. There are numerous powerful physical spaces in this jungle which have healing energies; so sometimes I make people spend time there before or after they have taken a dose. Or sometimes some people need to be treated at certain times of the day or in certain seasons or days of the week. But finally, the real power of my healing comes from TRUST. If you don’t TRUST me and my effort to heal you, I can’t heal you.”

Janu Kaka’s main ‘clinic’ was the makeshift bamboo and mud shack just outside the village. That was where he had placed a small mud mound which represented the Mother Spirit of the jungle. He offered his simple and unadorned but powerful prayers and offerings to her and in her presence, in the courtyard, he received hundreds of people who came with their ailments. Few left unhealed.

Janu Kaka mud representation of the Spirit of the jungles

As his ‘fame’ spread patients began turning up from far flung places and he did his best to help them. However he often mentioned to me – “ they carry the sickness of cities with them. How can I help them? They aren’t in touch with the earth. They don’t even belong to the earth anymore – what power can I draw on to heal them? In fact, they come with ailments I don’t even understand. I urge them to live closer to the earth, to Nature. But they are always in a hurry. They just want to be healed.”

Then he added with a smile, “I already know you for years, you’ve changed so much. You aren’t so restless anymore. I think we can be friends. Good friends. I want to tell you something. This forest is changing. It is not what it used to be….the ancient trees are vanishing, cattle and crops have invaded the jungles….other people’s gods have taken up residence here, alien places of worship are being built. We are becoming strangers here. Remember that little bamboo shack I kept my mud devi in? It’s a temple now and a strange god sits where she used to sit. I cannot heal people there any more because that doesn’t belong to the jungle anymore. That doesn’t belong to this earth. Soon people won’t even trust me anymore. Do you know? I am not allowed to even visit where my sacred space once was.

Like Janu Kaka, many other shamanic healers have fallen by the wayside as nature’s old spaces are cleared out to make way for new land usage, and new gods. In the process, a whole tradition of healing is being wiped out.

The last time I met Janu, he was meeting his ‘patients’ in a small teashop in Ahwa, a nearby town. We sat in silence and allowed our teas to get cold. “This is the end,” he said finally.

A year later he was no more.