The Catalytic Synergy of Homeopathic Medicine by Dr Mukesh Batra

Dr Mukesh Batra, LCEH, FSRH (MED) P (LOND), MDH (USA), FBIH (UK), a homeopath of international repute, is Founder-Chairman, Dr Batra’s Group. In a career spanning four decades, Dr Batra has treated thousands of patients, including presidents and prime ministers, and revolutionised the way homeopathy is practiced today. A writer, photographer, singer and philanthropist, Dr Batra has been honoured with several fellowships and over 50 national and international awards, including the Padma Shri, one of India’s highest civilian awards, by the President of India. He has authored several books too, including the critically-acclaimed cyclopedic work, Healing with Homeopathy. He lives in Mumbai, India. Website: www.drbatras.com

Modern medicine (conventional, or allopathy) is highly dependent on the role of ‘pharmaceuticals’ — so, why does homeopathy ‘avoid’ their use is a common query.

There is more to the whole credo than what meets the eye, ear, or mind.

The pharmaceutical concept in modern medicine is old; there are over 200 major, multinational companies in the field. Their strength is derived from surplus funding, research and development (R&D) and aggressive marketing. Homeopathic pharmas are relatively new. There are about 5-6 multinational homeopathic pharmas today. In addition, funding that focuses on areas, such as homeopathic R&D and marketing, are comparatively not as sizeable — but, they are poised to grow and expand in the future, thanks to the expanding popularity of homeopathic speciality products.

Picture this. There are homeopathic alternatives vis-à-vis allopathic drugs — to highlight the ‘pharma’ credo. Some of them have undergone clinical trials — and, also successfully. The only thing is they have not been marketed as aggressively. A representative list of such homeopathic ‘alternatives’ appears in the accompanying table. 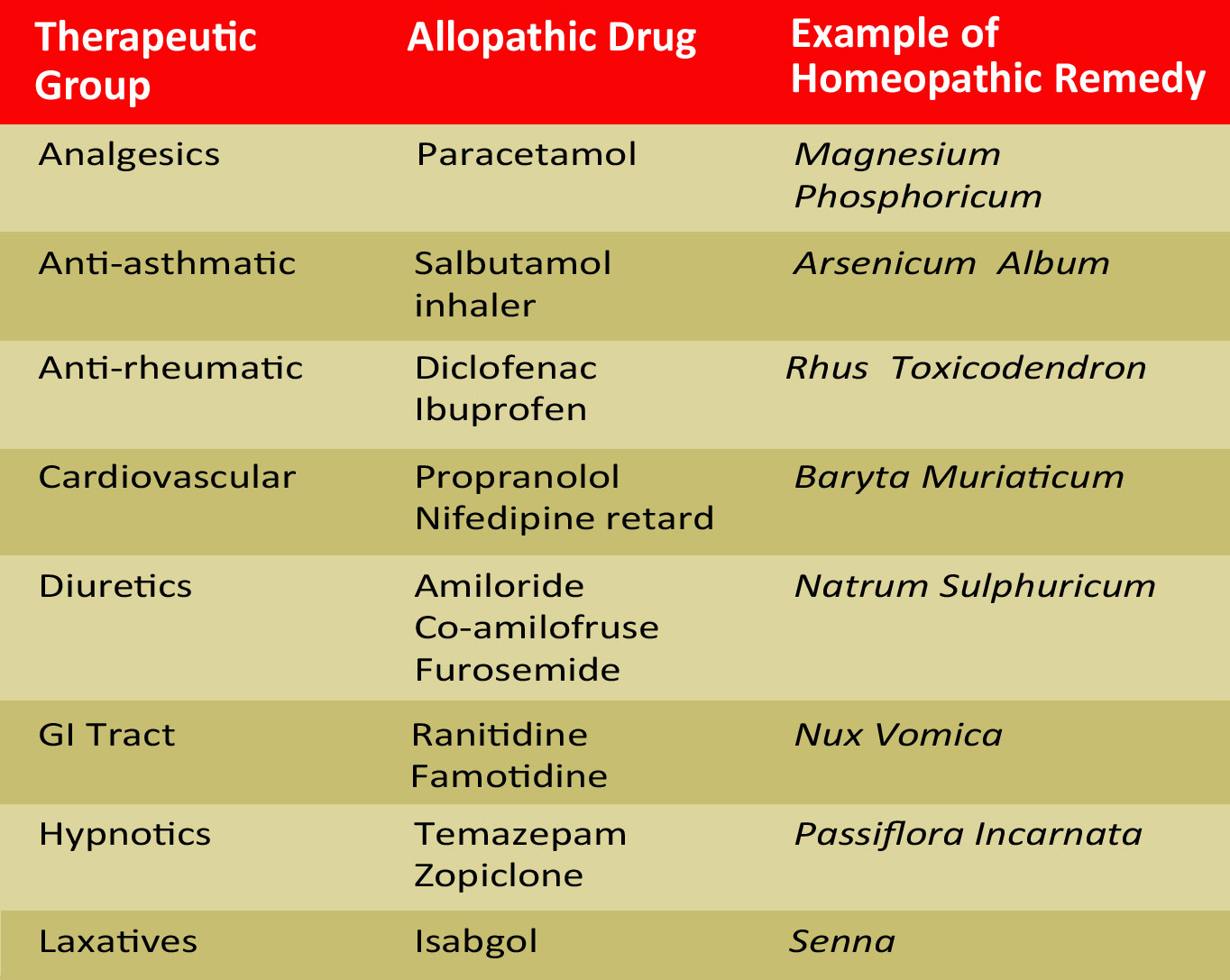 The best part is — such homeopathic remedies may be used alongside conventional (allopathic) treatment. This is contrary to the old, or traditional, homeopathic, view that they should not be used together, because homeopathy believes in the ‘theory of suppression’ — through the use of certain conventional or modern medications.

For example, a cold, suppressed by conventional medicinal agents, may lead to asthma. Likewise, the application of steroidal creams could suppress a skin eruption, and lead to flare ups, or other unrelated illnesses, because the underlying factors, the real cause of the problem, or toxins, are not naturally expelled. Homeopathic remedies remove such flagrant mechanisms from the inside out — not just treat them at the superficial level.

To cull another case in point of the ‘pharma connect’ of homeopathy, or the pharmaco-toxicological properties (pathogenesis) of the homeopathic remedy, Gelsemium sempervirens (yellow jasmine): 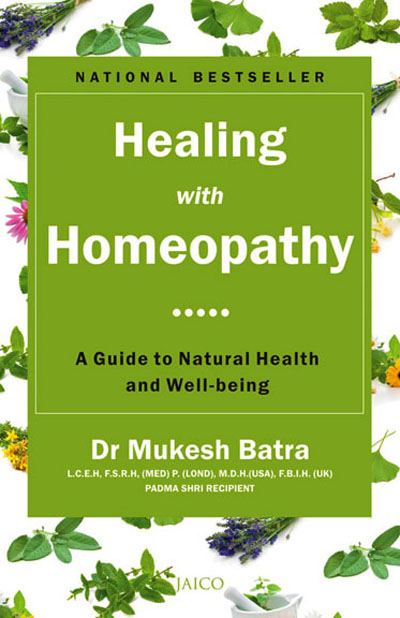 The primary indications of the homeopathic remedy cited also include nervous apprehension, with flu-like symptoms — similar to the headache symptoms.

In the words of the legendary homeopath, Dr Elizabeth Wright Hubbard, MD, “(Homeopathy) searches for anatomical or physiological changes in the sick person and classifies these changes, when found, under some disease nomenclature. This search is called diagnosis, and modern medicine feels that the possibility of cure depends, in large measure, on the certainty of diagnosis. It defines as pathology the organic structural changes due to ill-health which it finds before or after death. It finds that many diseases are accompanied by some variety of bacteria which it considers to be one of the causative factors. In short, modern medicine feels that it must find out all the ‘facts’ that fit in with its own concept of disease. To all of this the homeopath subscribes, but he feels that it is only the beginning of what he must learn about their patient. The spontaneous characteristic things that each patient longs to tell, be they ‘very’ general or minutely particular, are of special interest to the homeopath, for they individualise the case, bringing out that particular patient’s reaction to the ‘disease’ he suffers from. The busy modern doctor feels he does not need to know these salient points, as to him they are not signposts, but merely clutter.”

Dr Hubbard elaborates, “(At this point) modern medicine is ready to try to cure the disease it has diagnosed. What laws of cure does it follow? First, the commonsense principle of rectifying anything mechanically wrong and instituting appropriate hygiene, diet and so on. When it comes to the prescription of actual drugs, those that are given are not uniformly governed by any one law. The intent is to give them on a physiological basis, which means that they are experimented within laboratories in ‘crude’ dosage, and primarily on animals. It is more or less expected, by analogy, that what slows the heart in the frog, rabbit or dog will do so in the human. In addition to laboratory data on animals, many drugs are tried out empirically on patients and pass into general usage in accordance with their success.”

Homeopathy has been shown to be a useful adjuvant therapy in post-operative care, or after bypass surgery too. The homeopathic remedy, Arnica Montana (Monkshood), is the remedy of choice in either situation. Homeopathy can also play a balancing role. In cases that require hormone replacement therapy (HRT), for example, but where patients are not suitable for HRT, because they have had hysterectomies (removal of the uterus) for malignancy, homeopathy is often useful.

What also adds strength to homeopathy today is it is one of the fastest growing systems of medicine. It is also the second largest medical system in the world, according to World Health Organisation (WHO). It is used by over 600 million people worldwide.

People are increasingly fed up of the side-effects of modern medicine. They are opting for safer, holistic medicine — homeopathy is one of the foremost options.

Homeopathy is mind-body, holistic medicine; it is, likewise, non-invasive and free of side-effects. It fits the safety aspect bill perfectly

There has been a real shift in the way people think about their health today. Rising healthcare costs is yet another factor for the surge of interest in homeopathy. Many people are attracted to homeopathy because of its emphasis in treating the whole person — body, mind and spirit. In this age of managed care and impersonal group practices, most people/patients find this individualised approach of homeopathy particularly appealing.

The World Health Organisation (WHO) brought out a draft report (WHO Traditional Medicine Strategy, 2002-2005). It showed that homeopathy was therapeutically ‘useful’ — albeit this whole exercise was masked by furtive scepticism. It is also a fact that a handful of open-minded conventional physicians suggest — sometimes with a muffled voice — that homeopathy should be integrated worldwide with conventional medicine to provide adequate global healthcare.

A recent survey conducted by IMRB International in India — which included cities like Mumbai, Bengaluru, Hyderabad, New Delhi and Kolkata — showed 90 per cent of people perceive homeopathy as a trusted form of treatment and its usage is higher than any other form of treatment. The survey conducted among the general public found that 100 per cent of people are universally aware about homeopathy and 92 per cent perceive it as a ‘reputed’ form of treatment. The survey highlighted that most people use homeopathy primarily for backaches, gastric disorders, skin and hair problems. Also, among homeopathy users, 91 per cent said they were satisfied with the treatment and 93 per cent were willing to recommend homeopathy to others due to higher satisfaction levels with the treatment.

During the past 25 years, there have been over 200 controlled and 125 randomised trials in  homeopathy, analysed by meta-analyses. In each case, research has confirmed the healthy, healing, also biological, benefits of homeopathy. There have been scores of new clinical trials and studies on homeopathy too — testing its efficacy in a host of ailments, right from acne, anxiety, arthritis, diabetes, hypertension and irritable bowel syndrome (IBS), to children’s and women’s diseases.

There are a number of ongoing research (evidence-based medicine) studies in the area just as well — augmenting the tangible benefits of homeopathy in the clinical setting, along with patient-based outcomes.

This bids fair for homeopathy’s growth and acceptance too, more so in a world that is in continual turbulence, or flux, what with the ever-increasing, or mounting, sceptics’ ‘blitz’ for its extinction, thanks to growing scientism, or call it what you may.