Margi Prideaux is an author and international wildlife negotiator. She has written about wildlife in international politics and law almost every day for the past 28 years. As an international negotiator and independent academic, with a PhD in wildlife policy and law, her words have been tuned to inform policy audiences in more than 20 different international conservation processes. She has four books including Birdsong After the Storm and Global Environmental Governance, Civil Society and Wildlife, has co-authored All Things Breathe Alike: A Wildlife Anthology, and co-edited Tales from the River: An Anthology of River Literature. Along the way, her shorter musings have been published online at AlterNet, Ecologist, Global Policy, Live Encounters, openDemocracy, and Wildlife Articles.

This is an excerpt of Margi Prideaux’s forthcoming book, Wild Tapestry, to be released by Stormbird Press in late 2019. 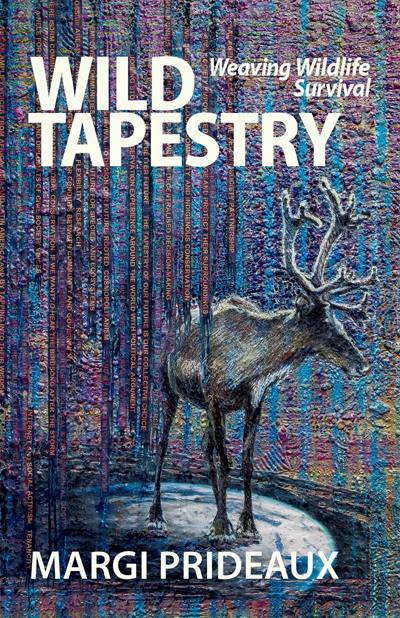 We have lived by the assumption that our political system will naturally, and progressively evolve. We were wrong.

The near future now holds unprecedented environmental and political chaos. The need to arrest climate change and biodiversity decline is urgent. But our frayed political system is incapable of taking action and of recognising the myriad of just, local conservation solutions that might be possible. Meanwhile, big business gains ever more power to monetize the natural world, condemning thousands of species to disappear from the rich and beautiful tapestry of the earth. Trees have become carbon sequestration; gorillas an ecotourism destination; species without market value are invisible. People across the world intrinsically know that once wildlife is gone the place they once lived will be hollow.

These are the threads we must protect, but with justice and care to ensure their rich lustre is preserved as well.

The fabric we are weaving now is dystopic.

From the influence and power of wealthy countries, we rake against the natural fibres of local conservation, destroying their form and texture, until they are smooth and uniform. In our determination to find solutions for diverse and complex local problems, we have been seduced into weaving with neutrality—with sameness and conformity.

This seduction has already damaged many weft strands, leaving communities and their cultural knowledge displaced. Whole villages have been forced from their ancestral homes—wilderness they have harmoniously inhabited for generations. In their place armed border guards stride, paved roads snake, and exclusive hotels stand.

Where children once learned from their elders of the leaves and fruits and animals around them, tourists now stare from open-top cars at the last surviving tiger.  While hunters once stood on the ice edge at sunrise, offering thanks to the spirit world before hunting meat for their community, now they wait for wealthy sport shooters from half a world way, lusting for blood and a polar bear trophy.

Cloistered in our cities and towns we are disconnected from the venerable bond between nature and humans that remains tangible and real for communities in many wild places. Campaigns are launched to save the last surviving golden lion tamarin, but they are funded by corporate profit procured by flooding valleys and mining sacred mountains.  Meanwhile we flock to conservation solutions that mute a myriad of beautiful, diverse, and just local options—forcing the colour from the threads of community relationships with caribou or kakapo; with elephants or emus; with panthers or pythons, until all that is left is ostentatious words on a page.

There are few relationships so closely bonded as that of human and Rangifer tarandus—caribou or reindeer. These magnificent species are native to the Arctic, subarctic, tundra, boreal, and mountainous regions of northern Europe, Siberia, and North America.

As summer approaches, many caribou herds of Canada and the US head north in one of the world’s great large-animal migrations. They can travel six hundred miles, or more, along ancient annual routes to a journeys-end of summer feeding on the abundant tundra. When the first snow falls, they turn south again and complete their migration to spend the winter in more sheltered climes.

These gentle animals have provided food, shelter, transport and a harbinger of seasonal change for generations of Saami, Nenets, Khants, Evenks, Yukaghirs, Chukchi, and Koryaks in Eurasia, First Nations of Canada, and Kalaallit of Greenland. These peoples have followed, observed, and hunted the caribou and reindeer for millennia and the herds remain the source of inspiration, hope and belief for some still. Now First Nations peoples of Canada watch, with sadness, as territories, where caribou roam, feed and breed, fragment and disappear in the face of industrial human growth—from forestry, mining, oil, gas and hydro development, and by climate change impacts, roads and seismic lines that open the areas to hunting and predators.  Many herds are in danger of being wiped out, while cities further south have swollen with wealth, giving no thought of justice for what these peoples have lost.

When government biologists in Canada want to learn where caribou are, they put radio-tracking collars on a few animals and monitor their movements. They get a rough idea of where herds travel, but they glean nothing about the caribou’s history before their habitat was degraded. That wisdom is held by the indigenous communities. Now, at the eleventh-hour, co-management between the Canadian Government and First Nations communities is being trialled, but with difficulty as it struggles to create bridges between traditional knowledge and the structures of governments. Still rooted in the science and traditions of wealth and prosperity, these experiments fall short of just conservation in many ways.

Globally, the current rate of biodiversity loss is nothing less than a crisis for humanity. But, it’s flawed thinking to conclude that the only conservation response is to undermine social justice.

The current era often talks of sustainable development, but has forgotten one of its founding pillars—inter and intra-generational equity. The displacement of local people, and militarisation of wildlife protection have become all too common. International negotiations have become grid-locked on how to achieve equity, leaving the bulk of benefit from conservation to accrue where wealth is centred, and the principle costs to fall locally and to the poor. That biodiversity has already been erased from many wealthy regions seems forgotten. Europe and the UK, North America, Australia and New Zealand have already cleared, damned, and paved their most biodiverse lands. Maps and statistics about the contemporary biodiversity crisis are suspiciously devoid of these past crimes.

Now, the race to save what is left is focused where biodiversity values remain high—where indigenous and local communities have lived for thousands of generations while causing minimal harm. Sitting at the loom, we give no pause to recognise local knowledge and guardianship. Nor are we conscious of a travesty. These communities have not eroded the richness of biodiverse forests, savannah and seas. The damage stems from the rapacious hunger of modern industry and consumers of wealth from the same baron deserts that have already destroyed so much.

The tapestry of our future is our collective choice. We can sit, indifferent, and weave plain fabric, allowing others to dye and shape it into projects of their making—projects that will impoverish communities and subjugate nature until we lose the last of what is precious. Or, we can design a beautifully woven tapestry that reflects the depth, texture, and colour of what we want to save.

The modern world unjustly ignores the wealth of knowledge that local peoples hold about caribou, reindeer, and thousands of other species across the world. It is time for their ancient, wise stories to be core to the wild tapestry of future decisions.

Conservation that involves and engages local communities—just conservation—performs better than ‘fortress conservation’. Community-based reserves outperform exclusionary, uninhabited parks. Coral reefs that have strong local conservation engagement outperform the no-take reserves. Deforestation is lower in community managed forests than exclusionary protected areas. Including local people in decisions, harnessing their wisdom and knowledge, and acknowledging them as legitimate guardians is better for us all.

The weft still exist where local activists fight to protect water birds and wetlands from mining, where herders make peace with Himalayan snow leopards, and people stand in the footprints of elephants that walk the plains and forests of Africa. We can embrace these local voices, and choose the warp thread that empowers them. Even with imperfections, we can weave our wild tapestry. We can sit at the loom of survival and design a wild, beautiful, and just future.