Donna Mulvenna is a horticulturalist whose journey as a writer began when she moved to the Amazon rainforest in French Guiana. For four years she wrote from a platform high in the canopy where various wildlife became her daily companions. Through her writing she hopes to give readers a glimpse of the wonder she discovered in the rainforest, reveal the profound effect it has on people’s lives, and share why it is more important than ever to reconnect with the natural world. ‘Nobody leaves the Amazon rainforest unchanged,’ says Donna, when explaining why she no longer feels the need to own a mobile phone, buy material possessions, or wear shoes. When not writing or gardening, she can be found sitting under a tree reading, or paddling along a river in her sprint canoe. Donna is a Fellow of the International League of Conservation Writers, and the author of Happiness is Green, Wild Roots—Coming Alive in the French Amazon, and The Awe of Nature. She co-authored All Things Breathe Alike: A Wildlife Anthology, and is the co-editor of Tales of the River. 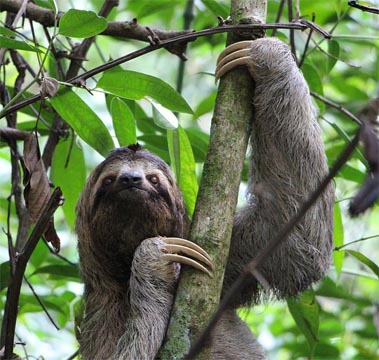 Donna Mulvenna spent decades yearning for a sea-change, before an impetuous decision catapulted her into a tropical rainforest where she shared a jungle shack with ferocious ants and scorpions, joined a scientific expedition deep into the Amazon’s interior, and got lost in a remote swamp. Formerly a city-dweller, who ignored her intuition to engage with nature, she shares how a close encounter with a sloth turned her normal view of the world on its head.

As the night sky turned sunrise pink from lunar blue, and the rainforest hummed with lively birdsong, I leaned over my treetop office’s railing to stare hard at the tall cecropia tree. There was something different about the tree this morning; a clump of decomposing leaves nestled in its fork which wasn’t there before. As I squinted to get a better view, a furry limb reached into the air.

‘Come quick,’ I called to my boyfriend, Frank. ‘There’s a sloth in the tree.’

On cue, the male sloth—with telltale orange splotches on his back—swivelled his head from left to right, up and down, the embarked on a skyward climb, pulling branches towards himself, and stopping to rest every few minutes.

A solitary being, the sloth seemed oblivious to the struggle for existence that occurred around him. Insects hummed from hundreds of plant species—orchids, bromeliads, and mosses, and a troupe of monkeys abseiled through branches towards a heavily laden mango tree. A pair of toucans, their bodies comically small compared to their over-sized beaks, beat their wings furiously overhead.

After another rest, the sloth unfurled his gangly limbs, turned his sweet face to the sky, and resumed his ascent. The nearer he came to the top of the tree, the further apart the branches spread. He waved his front limbs through the air, but found no branch within reach. So he tucked his chin into his chest and appeared to go to sleep. Had he given up, or was he deep in thought?

After a small eternity, he raised his head and turned it in a wide arc. Then, in slow-motion, he performed a gravity-defying stunt by gripping the trunk with his powerful back claws, back-flipping into mid-air, and clasping a worryingly thin liana vine with a set of hook-like front claws. The vine swayed and leaves rained down, but it held his weight. He climbed the vine surprisingly fast, but just when I was sure he’d reach the treetop he stopped again, comfortable just to hang from the vine. When he finally wedged himself in the tree crown, to recharge by solar heat, I bowed my head and sighed like a hot kettle blowing steam: what a relief.

Frank had seen a sloth before I had. He had been driving when he noticed a sloth crawl from the forest onto the street. By the time he stopped the car and walked back, the sloth had splayed to one side onto its stomach, its long limbs rendered useless on the asphalt as it searched for a handhold. Frank plucked it from the road, crossing over to place it against what he hoped was an appealing tree. By the time he returned to the car, fitted his seat belt, and placed the car into gear, the sloth had turned its delightful smiling face towards him. Perhaps it was expressing its gratitude for being helped across a wasteland that cut it off from an important food source.

When Frank related the story, I asked, ‘What did it feel like?’

‘That’s it, Donna. It didn’t stop for a chat or anything.’

My turn to nurse a sloth came when I visited the local Chou-aï sloth reserve. Behind a spring-loaded door, baby sloths clung to their mothers’ stomachs, adolescent sloths swung from rafters, and pensioner sloths reached out to passers-by. Everybody in the enclosure, human and nonhuman, was smiling.

‘Would you like to hold one?’ the keeper asked.

With eyes wider than bottle caps, I looked from the keeper to Frank, to overcome with anticipation to answer.

When the keeper leaned towards me, the sloth in his arms lifted her head and ogled my hair. Then she extended her long claws and gently grabbed a tuft. The keeper redirected her ten centimetre claws to my shoulder. Once settled, she nestled her head into my chest. Could it have been the love in my heart that prompted her to lift her face to mine so I felt her breath flutter across my cheek?

‘Joy’ and ‘happiness’ were two words I’d often used interchangeably, but in the sloth enclosure I learned they are not the same. Joy is a fuller, more profound happiness that surged like flood water through my veins.

She wore a bob-style, hippie haircut and displayed a mischievous demeanour when she frequently grabbed my hair. Each time her keeper patiently redirected her claws. I scratched her rump and snuggled my face into her. She smelled fresh and clean, like raindrops, blossoms, and leaf litter.

‘Okay, little madam,’ the keeper said. ‘It’s back to your post.’ He pried open her claws and lifted them from my shoulders.

‘She loves cuddles almost as much as she loves to eat,’ he said. ‘People underestimate how affectionate sloths are when they feel secure around people.’

I knew sloths made endearing pets, but thought them more deserving of a wild life, free from the deforestation responsible for imprisoning them in this small space.

‘Please, just a few more minutes?’ I asked, hugging the sloth tightly and running my fingers through her long hair and downy undercoat.

‘Donna?’ Frank looked at me with a raised eyebrow and pointed towards the door. ‘How much longer?’ He looked apologetically at the keeper.

‘Until closing time,’ I said, pointing towards an infant sloth that clung to its mother who squatted in a small pond. ‘They smell lovely, like babies without the nappy smell.’

When the keeper stepped in and took her back, I felt the ache of loss in my arms.

Since observing sloths, I’d become one of their greatest defenders. George Louis Leclerc, an 18th-century French scientist, said, ‘One more defect and sloths could not have existed.’ Had he ever cuddled one? Also, I strongly objected to sloths being called lazy, something people rarely fault turtles or starfish for.

The slowest mammal on earth, sloths project a calmness, peace, and perseverance that proves we don’t have to be perfect, or fast, to survive and thrive, or to be loved. Life might get stripped from part of us, even give us a raw deal, but our uniqueness and vital force, and our connectedness to nature, can pull us through.