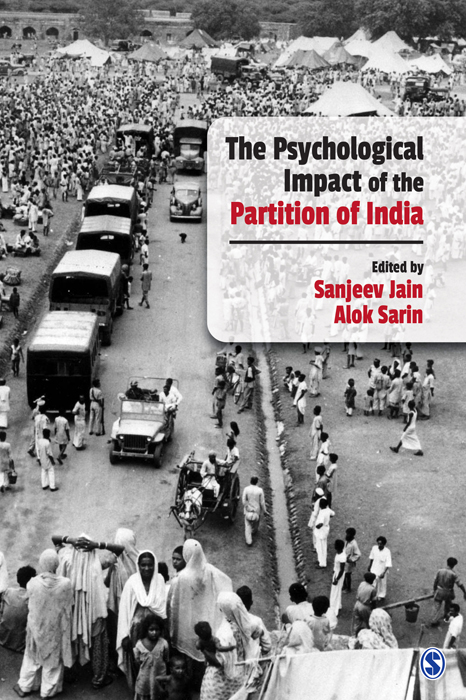 The book weaves together issues that link psychiatry as a profession, individual and group psychology, and the wider issues of social distress and dysfunction, as influenced by, and reflected in mid-20th century south Asia.   It thus begins with the actual events such as the partitioning of mental hospitals, its impact on clinical services in northern India as well as health-care planning for the sub-continent. The ensuing chapters focus on the psychological processes that were identified in the creation of the ‘other’, as a prelude to the actual vivisection, and wider implications of social psychology and politics. The third theme looks at partition through the broader canvas of public consciousness, as reflected in literature, issues related to gender and women’s bodies and souls, and the pernicious relation between affect and violence on civic society and the political process.

The book is edited by two well-known psychiatrists Sanjeev Jain and Alok Sarin, whose families have personally been through the throes of partition. The contributors to the essays in the book come from diverse backgrounds in psychiatry (Jain, Sarin, Kala, Murthy), human rights (Basu), literature /linguistics/sociology (Kamra, Kidwai, Nandrajoj, Saint, Sharma, and Sabharwal).

It begins with a small snippet in the daily clippings collected by Lord Mountbatten which emphasized that the mental hospitals would not be divided after Partition. Thus, the discovery of the Mental Hospital reports of both the British Empire and Post Independent India suggesting that the ‘chilling fictional metaphor for madness’ that engulfed society in 1947, and so vividly discussed in Toba Tek Singh, and most often perceived as satire, was actually based on a historical fact. Patients, who are now seen as objects to be divided, are transferred across newly created borders, and their personhood, their experiences, their sorrows, and for the survivors, their resilience and subsequent survival are all stories that must be told, heard and learnt from. The professional silence around this seems both anachronistic and intriguing. The psychological trauma of partition, unlike that of the holocaust, never got similar academic attention in the West, and the intelligentsia in India were too small, and perhaps too scattered, to really comprehend and comment on the events.  Routine medical services also bore the brunt of partition. Mental hospitals and jails were also partitioned over several years, along with the medical services. The proposed National Health services were abandoned, the Indian Medical Service disbanded, and universal health care became an ever receding chimera. Insensitivity to the needs of persons with mental illness, apparent then, continues in the present day. In a sense, if the emerging countries could not ensure the safety and dignity of the most marginalized, on grounds of religious identity, then the professing of a modern secular state (which both nations did) rings very hollow indeed.

The events of the Partitions were often described a metaphor of madness. But the process of this incompatible ‘other’, first tested out in Nazi Germany by the extermination of all those in mental hospitals, and subsequently applied to ethnic groups, was gradually reflected in political writings in India (Vakeel called the talk of Partition as the ‘Political Insanity of India’ and  while Prof Beni Prasad at Allahabad University regretted at the destruction of a shared cultural space; while others emphasized the gulf between the communities and even went so far as to call them different species!). The processes to create this chasm and then justify the division, is repeated in Yugoslavia, Congo and various parts of the world, where the tyranny of small differences overrides the shared universal humanism. This is a process in which many mental health professionals have sometimes been seen to be complicit (as Raskovic and Karadjic in the Balkans were), and as Basu points out; also pointing out efforts by the State to co-opt the mental health services for use in brain mapping and interrogations.

The books then shifts to the wider manifestations of public memory and awareness, and Saint and Nandrajog provide a birds’ eye view of how the metaphor of madness (now seen as ‘tired’) was used in the Punjabi, Urdu and English writings of the period. Even in these, the image of the madman/ madwoman, being swept along as flotsam in the craziness going on, is still a chilling reminder of what happens to the marginalized at times of upheaval. The portrayal of Mahatma Gandhi in the media, and his own speeches provide a backdrop to the extent of psychological distress. He reflects repeatedly on the personal anguish and torment, and his interactions with the Friends Ambulance, and other leaders portray an immense sadness. He repeatedly refers to the killing of doctors, and the fact that the family of Hakim Ajmal Khan had had to leave Delhi, and refers to the events as a kind of ‘national suicide’. The ‘rescue and repatriation’ of abducted women, and the description of the work of Mridula Sarabhai and Anis Kidwai, through the ideologies prevalent at that time, and their unconcern with the individuals perceptions’, as also the responses of the society around them, gives an insight into the entrenched patriarchy evident then. These issues cast their shadow even now, with allegations of ‘love jihad’, and women’s’ bodies and souls still seen a legitimate battleground for ethnic identity.

The retributive violence, the use of anger and hatred as an instrument of political manipulation, has influenced the very nature of social discourse, as Kamra points out. The metaphor of disease is now increasingly used in realpolitik (sanitary cordons around hospitals, the cancer of ‘extremism’), a reflection of the colonial perspective which established a distance between the rulers and the ruled. This incorporation of the colonial attitude, and even its turning inwards, thus resulted in a “fracturing this very history of built community”. The failure to come to terms with events with hundreds of thousands dead and millions displaced and dehumanized; and a multitude of victims but no identified perpetrators, thus resulted in an ambiguous and amorphous psychological response. No line was drawn, unlike post-Holocaust, when it was decided that it should (would) never happen again. Condemned to repeat partitions over and over again, the division into thinner slices of humanity, on grounds of origins, language, caste, religion thus continues apace. After all, this cutting up of society into bite sized pieces, as in the divide-et-empera of the colonial period, affirms that the people are food for the table, while the rulers feast at the table.

The secularization of the mind, and the madman as a symbol of social disorder was formulated over the last few centuries. As has often been noted, psychiatry has a long past, but a short history. This historical process, by implication, places the theories and formulations of psychiatric illness, within the shared process of reform and renaissance, and common-sense philosophies. These models have now been shared by almost all societies. Within India, the mental hospital, and the mad-man quickly became a familiar cultural metaphor, from going Doolaly (in English/ Anglo-Indian slang) to sending someone to Agra, Bareilly or Ranchi paagal-khana (mad-house) or on board the Number 4 bus (which served the mental hospital in Bangalore), when referring to someone whose opinions and behaviours were beyond the pale! Politicians still resort to score debating points in the legislative bodies by calling their opponents mad or worthy of admission to one of these Asylums.  The public reports, and comments in the press (vernacular and English) had accounts of recovered mentally ill. The large number of admissions and discharges from the various Asylums implied that the experience of madness had become commonplace, as well some understanding about contemporary ideas about the causes, and treatments had percolated through society.   ‘Madness’ could now be used easily as a metaphor, both in its tragic and pejorative connotations. By calling the violence and brutality as ‘madness’, one could then ignore its treatment (and resolution), much as madmen had been ignored for centuries.

The practice of psychiatry in India, in its fervour to emerge as a scientific, empirical and universal science, has, in the process, become sterile and devoid of the richness of human experience. Human experience is both universal and at the same time, highly personalized. The importance of understanding individuals in their personal, social and larger-world contexts in this helping profession has given way to looking for simplistic biological explanations for underlying condition, and an enthusiasm to fix the human condition with a ‘pill for every ill’. This, in some ways, is a sequestration or partitioning of professional minds. And perhaps explains some of the reluctance to address the issues at first hand. After all, examining this could detect “the silence of complicit majorities and of subsequently complicit generations”; and the impact of this on notions of national identity, which would then be seen as “uneasily tethered”.

Medical practice almost always focuses on the individual, and the disease is subjected to intense examination at every conceivable level, from the molecular to the social. At its core is a belief in universal humanism, and that these processes (of health and disease) are shared. This insight has been attained after centuries of progress. As psychiatrists and doctors, we are confronted daily by the similarities in people’s brains, and to think of divided minds thus seems particularly unhelpful.