David Morgan offers some tentative reflections on the two great political tendencies of our age. 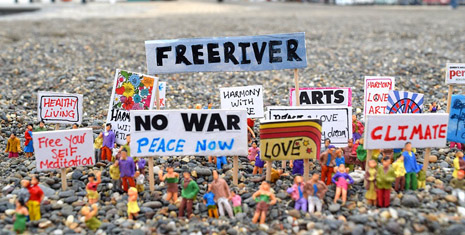 Populism is commonly associated with the political right but this is not the neo-conservative breed which dominated the immediate post-Cold War era and whose rise can be dated from the collapse of Communism to the global financial crisis of 2008. Populism in its modern appearance is very closely linked to the age of austerity and the challenges posed by the breaking down of barriers to human communications and possibilities of mass travel reflected in the rise of the Internet, the emerging superstates such as the European Union with their “open border” policies and the availability of cheap flights which enable different peoples to intermingle and experience other cultures as never before in human history.

Such social trends have accentuated the dissolution of many traditional customs, shaking up relatively stable communities and transforming lifestyles, threatening to dissolve nation states and old patterns of living.

Ironically, while the actual wealth gap in real terms such as in the possession of cash and in material assets between the super-rich elite (known by the sociological term of “high net worth individuals or HNWI) and the great mass of the people has never ceased to widen, the social conditions of the poorer majority internationally have moved closer together as a result of the ability to cross borders in search of work, including the blurring of the distinction between what constitutes illegal and legal migration. The weaponisation of the plight of migrants by actors across the political spectrum has highlighted the profound social divisions within and between nations, but it has especially exposed the chasm between the elites and the masses. The elites, who clamour for open borders, are generally those whose lifestyles are least impacted by the changes; in fact, they derive material benefits by availing themselves of the increased opportunity to access an inexhaustible supply of cheap labour. In marked contrast, when those living a precarious existence witness the onward march of the migrants across borders, as occurred on the continent of Europe and is currently occurring at the southern border of the United States with the so-called “caravan”, such phenomena are perceived by many to pose a direct threat. It is understood that the new arrivals will soon be competing for jobs, housing, school places and hospital beds. Amid these developments and anxieties populism has been able to thrive. The people’s grievances and widespread disenchantment with mainstream politicians who have been blamed for mass migration gave rise to a situation ripe for exploitation by the populists of the right, which have achieved some notable political successes in recent elections across Europe, such as in Germany, Sweden, Austria and Italy, and with the elevation of Donald J Trump as president of the United States.

It is definitely deeply deplorable to see the unscrupulous manipulation for political gain of the desperate plight of migrants who only want to improve their chances of a better life. However, it is not so simple to identify who are the culprits in this unworthy endeavour. The right certainly stir up the fears and prejudices of people against illegal migration, citing alleged crimes that are committed in their repeated use of hate fuelled rhetorical tropes, such as blaming migrants for increases in violent crime, murder and rape. This has been evident in America, Europe, Canada and Australia, in fact, everywhere that the so-called “alt-right” has come to some prominence. It must however be admitted that the left too has also not always been averse to exploiting the migration issue for its own political advantage; for example, the Democrats in the United States have drawn much of their political support from migrant communities, succeeding in winning migrant votes in far greater numbers than their rival Republicans. The Democrats clearly have a great stake in opening the doors to more migrants and in granting them voting rights. Such a situation is ripe for political manipulation in that it creates a client relationship between the political party and the communities who in their gratitude are prepared to vote for them. Such support cannot be counted on in perpetuity but it can last a generation or two. A comparable situation has persisted in the United Kingdom where the opposition Labour Party has traditionally drawn much of its support from migrant communities in recent years, be they families from the Indian Subcontinent, the Afro-Caribbean nations and latterly from the Moslem communities. This reliance on ethnic communities for political support has not only turned people into voting fodder, it has shaped the political ideology and rhetoric of the party. The contemporary version of socialism espoused by the Labour Party can be defined as “identity politics” in contradistinction to the traditional class-based politics that had characterised the party for decades since the time of its foundation by trade unionists at the end of the 19th century. But the reason for this transformation of the Labour Party should not be solely attributed to simple political opportunism, although that aspect surely plays some part.

The party was traditionally anchored in the organised working class, but this is now far from the case. This is the root of the party’s problem. Much the same fate has befallen Labour’s sister parties across Western Europe, several of which have virtually disappeared from the political stage altogether in the countries where they were once so dominant such as France; indeed, such a rapid decline in social democracy is equivalent to that suffered by the disintegration of the Communist parties in the latter part of the 20th century.

With the decline in organised labour as a result of major economic structural changes, sometimes regarded as a disintegration of the working class and even heralded as the end of class politics, the Labour Party, which was created to give a voice to working people in Parliament, lacked a clearly defined purpose and direction. The rhetoric of human rights and identity politics has filled a vacuum. This has been a historic transformation, leaving the party slightly rudderless and open to capture by forces with only tenuous connections to the working class. The trade union movement has remained relatively strong but it is not the commanding presence in the party machine that it once was. Politicians from the professions such as law, financial services, policy institutes and higher education have gradually replaced the trade unionists and local government officers who previously dominated those persons who were selected to represent the party in Parliament. This trend was combined with the adoption of official and unofficial quotas for women and ethnic minorities, including the introduction of all-women short lists of candidates in the selection process; once controversial, women-only short lists have long become the norm.

The emergence of Jeremy Corbyn as party leader in the past few years has confused the picture slightly, but even he, although a staunch left-winger, has built much of his political support base around identity politics. In fact, Corbynism is actually an unstable coalition of forces combining what used to be called the new social forces of women’s groups, youth, black and ethnic communities, increasingly vociferous “transgender” and gay rights activists, as well as trade unionists and the traditional left. Corbyn’s difficulty in holding this alliance together is reflected most obviously in his attitude to Brexit where the party has been compelled to attempt to “look both ways” in order to simultaneously appeal to those who voted to leave and remain in the European Union; many working-class communities where Labour has been traditionally dominant, voted strongly for Brexit. To achieve the electoral success essential to ever be able to implement its reforming social programme, Labour cannot afford to alienate its working-class supporters. The political right has been seeking to exploit the seething discontent and alienation particularly among the “white” working class by taking up controversial issues such as the activities of grooming gangs and their targeting of teenage girls, an issue which Labour has studiously avoided and hardly taken any position on; in fact, in rare cases when a Labour MP has spoken out on this issue, they have faced criticism from the party hierarchy, as occurred with Sarah Champion MP when she spoke out about largely Moslem men who were jailed for grooming girls for sexual exploitation. Similarly, Labour MP Caroline Flint courted controversy and was even accused of racism by a Tory opponent when she argued that employers should do more to train UK workers rather than relying on importing skilled workers from the EU. Flint was a former minister for Europe no less, while Champion was forced to resign as shadow minister for women.

Jeremy Corbyn’s success can be attributed to the adoption of a version of populism from the left, which illustrates an important lesson that populism need not always be seen as a right-wing phenomenon. In fact, some leading thinkers of the left such as the late Ernesto Laclau and Chantal Mouffe have argued that populism can become an expression of democratic aspirations and progressive political identities. The field is too critically important to be abandoned to the right especially at a time of acute social, economic and environmental crises. Identity politics is certainly no substitute for old class politics and its ambitious political programme of social and economic reform that is aimed at achieving a fundamental shift in the balance of power and wealth in favour of working people.  We need genuine change for all people not favoured social groups or client communities. Identity politics can be profoundly corrupting of the political process and this can pose tremendous dangers with unforeseen consequences.