Blossom where you are Planted – if Possible, by Terry McDonagh

Terry speaks from the heart on the contentious issue of dual citizenship. 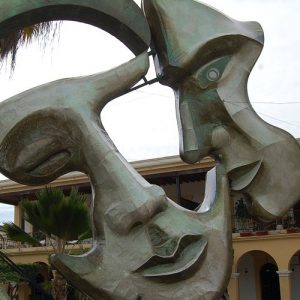 I grew up in the west of Ireland and have spent more than thirty years living in Germany. It’s been an interesting journey and I’m happy it’s turned out well for me. I’m an EU citizen, speak a second language and feel at home in the country of my birth as well as in my adopted home. I do not possess dual citizenship. Thankfully it is not an issue for me – I know where I belong. I can vote in general elections in Ireland and in local elections in Hamburg. I feel completely at ease with the situation. I have no desire to be a dual citizen with a vote in two countries. I walk the streets of Hamburg, happily, but my home of the heart will always be the west of Ireland. There is no contradiction.

For some people it is not so simple. As Irish people we know about emigration – we have it in our bones. It’s in the songs we sing and the stories we tell. I grew up knowing that the only way ‘out’ for most was emigration. The majority of my primary school class emigrated to Britain, Australia or the USA. Many became citizens of those countries. Some succeeded, grew wealthy, famous or both and were talked about – others were forgotten and became sad, discarded, unspoken chapters of history. Living with the knowledge of having to ‘go’ make the process of growing up straightforward, tragic and sad. Dual citizenship was never discussed but work was and money was.

I think it’s true to say that the world we live in is no longer straightforward and uncomplicated – that is if it ever was. The tragedy of the war in Syria has created vast movements of refugees seeking a home and place of refuge and survival. Voting and dual citizenship is far from their minds – it’s about survival. Europe is shutting down its borders. There was a brave, generous and genuine beginning by Angela Merkel but politics is shifting to the right. Borders are, again, becoming topics of heated conversation and the pro and contra Brexit discourse is on every European lip. My wife is English and thinks about the future – about European citizenship – about free movement.

Just recently, the German international footballer, Mesut Özil, retired from the German football team citing his Turkish background and lack of acceptance in Germany as reason for his departure. He would say he was German when they won and a foreigner when they lost. He is German. His grandparents came to Germany as ‘guest’ workers but he’s still got two hearts beating in his breast – and why shouldn’t he? It is complex. Blossom where you are planted. Most of the French team are ‘foreigners’ but they are French. We are all what we are and other. I think it is sad when we have to ‘gang up’ on one side or another. A passport is simply identity…why should we need two?

To live with duality can be exciting and risky. Some are born into it. It can open up avenues of the mind; expose us to new ways of thinking but, for certain individuals, there is the fear that we could lose ourselves and our ‘culture’ if we allow too many outside influences to infiltrate our tried and tested ways. Culture is, and always has been, flexible, pliable and evolving – it means living with change and contradiction. Dual citizenship, in itself, is a meaningless concept – a form of ownership – a foot in two places. To have a say in one country is a privilege not to be taken lightly.

A healthy child must explore its environment in order to grow. It is our duty as adults to continue to explore and grow in a space that will allow that growth to flourish. We are, after all, but one exclamation mark in an epoch. Let’s not introduce full stops.