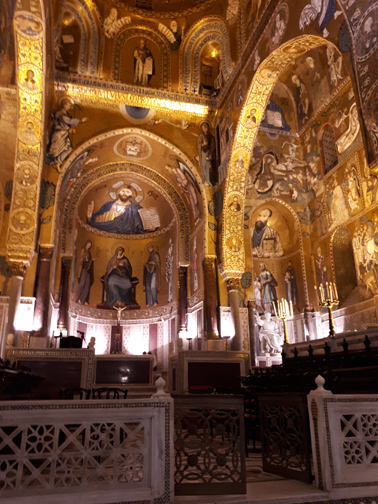 When the Norman, Roger I, began his rule in Palermo in 1072 AD it was already a vibrant centre of commercial and cultural activity. At the time of the Muslim conquest in 827 AD Sicily was part of the Byzantine Empire, with Greek being the main language. Nevertheless, many languages, including Arabic were spoken by the great mixture of cultures at home on the island. Inscriptions in Greek, Latin and Arabic illustrate the open-minded attitude of the Normans once they began their Christian rule in Palermo. Their approach was to assimilate and work together with other cultural influences.

All the influences are represented in the many architectural features of Palermo, such as its many palaces and churches. The stilted arch, roofing contrived by domes over rectangular arches and the use of water for cooling buildings can be seen as Arabic features. Many of the churches combine the basilica western shape with the Byzantine dome.

Great pictorial mosaics are featured in palaces and churches, such as la Martorana, Monreale, the Hall of Roger and the Palatine Chapel. They were executed by artists from Constantinople. Other more geometric mosaics, often inlaid in white marble reflect the Arabic love of complex abstraction.

In 1130 AD Palermo became the capital of Sicily and on Christmas day that year Roger II was crowned first king of Sicily in the cathedral which Roger I had built. Byzantine art and culture flourished together with the architectural tradition of the Maghreb and the Latin cultural influences from central Italy and northern Europe. Roger II extended the royal palace and had a chapel built inside it called Capella Palatina with all its walls covered in mosaics. Roger II was succeeded by William I who had palazzo Zisa built with a great royal park outside the city.

William I was followed by William II who had the great cathedral and the Benedictine monastery built called Monreale. The interiors of the cathedral and monastery are richly decorated in Byzantine mosaics. The Normans’ passionate pursuit of art and culture was an encouragement to many learned people of science, the arts, architecture and philosophy to gather at Palermo’s court, turning it into a magnificent centre of international activity.  Following in the Byzantine tradition as part of the Roman Empire which allowed women to own and inherit property, decide not to marry or remarry if they wished a number of women rose to power.

Adelaide was the daughter of Manfred del Vasto, the brother of Boniface del Vasto, marquess of Liguria. She married Roger I who was then 58 in 1089. She soon became his trusted and capable advisor. When her husband died at the age of 72 she was less than thirty years old. Her sons Simon and Roger were too young to reign. She became the regent and reigned competently. She was highly respected, especially after forcefully crushing a rebellion in parts of Calabria and Sicily ‘like earthenware dishes’. She is said to have ruled in a prudent fashion and exercised great care in governing.

Several official documents have survived from the time and show that she exercised great care in her governing. Of them the most evocative is the charter of 1109, indeed the oldest surviving paper document in Europe. It is a document which is written in Greek and Arabic. It describes Adelaide as ‘the great lady, the malika of Sicily and Calabria, the protector of Christian faith’. Adelaide stepped down when her son Roger (Simon had died at age 12) became sixteen. She continued to play a significant role in politics as her name can be found on official documents after 1112, when her son Roger II started his reign. She was careful to work together with local officials and donated generously to the local Greek monasteries ensuring their favours.

She consented to marrying King Baldwin of Jerusalem on the condition that should Baldwin not have an heir her son Roger would become king of Jerusalem. She became queen of Jerusalem. She brought with her an enormous amount of badly needed money, some Muslim archers and a thousand Sicilian soldiers. However her desires for Roger’s kingship were frustrated when Baldwin died only six years later and his vassals prevented Roger from receiving the crown. Adelaide sailed back to Sicily and died a year later in 1118 and was buried in Patti.

Margaret was the daughter of King Garcia Ramirez of Navarre and Margaret del’Aigle. Margaret was a powerful and intelligent person, often giving William I advice when he tended to remain undecided. She had four sons by him, two of whom died before their father. William II became the successor, while Henry became prince of Capua. Queen Margaret was the third wife of William I who died in 1166. After his death Margaret took over the regency as her son William II was only twelve. She ruled Sicily from 1167 to 1171. She declared a general amnesty of the realm and also revoked her late husband’s least popular act: The imposition of redemption money on rebellious cities. She enjoyed the support of the local population. By 1167, when Margaret sent money to the besieged Pope Alexander III in Rome, then opposing their common enemy Frederick Barbarossa, the people of Sicily were less happy with Margaret. They called her ‘the Spanish woman’. In 1168 events came to a head when rebellious vassals who opposed the Navarese and French courtiers were ousted. Margaret began to lose her hold on to power in Sicily. By this time the only member of family she had left was her underage son. She fought hard and wrote letters to the pope and to Thomas Beckett asking for support and reinstatement of members of her family. Little support came forth.  Her son took over the reign in 1171. She lived until 1183. She donated as her legacy the Benedictine abbey at the site of Santa Maria in Maniace. She is buried in Monreale, Palermo.

She was pious and maintained close contacts with her family in France and Britain. She corresponded with Thomas Becket, archbishop of Canterbury. Records show that she had given refuge and support to relatives of Becket after Henry II had banished them and confiscated their properties. Sicily was torn between support for Thomas Beckett who was backed by the pope and Henry II. Margaret and William were close allies of the pope, but they were also seeking closer relationships with the English court. The future marriage between William II and Joan Plantagenet, Henry’s daughter, had already been discussed. Margaret was able to maintain a middle ground in the conflict between Henry II and Becket and his family, friends and intermediaries. After Becket’s murder in 1170 Sicily became one of the first places to introduce the cult of Saint Thomas of Canterbury.

Joan was born at Chateau d’Angers in Anjou and spent her youth at her mother’s courts at Winchester and Poitiers, the seventh child of Henry II. In 1176 William II sent ambassadors to ask for her hand in marriage. She travelled on a hazardous journey and arrived on the 13th February 1177 to marry William II. She became queen of Sicily. Joan and William had no surviving heir. When William II died his cousin Tancred seized power and all the land that belonged to the queen. He imprisoned Joan. It was only when Joan’s brother, Richard the Lionheart arrived in Italy in 1190 and threatened Tancred who conceded and returned Joan’s properties to her and freed her.

The marriage between William II and Joan took place in 1177. Joan continued the devotion to the cult of Beckett. At least two churches were founded in Sicily and dedicated to Beckett, one in Catania and the other one in Marsala. A reliquary of Beckett, given to Joan herself was preserved in Marsala. Most impressive is the first effigy of Beckett, which was produced on the orders of Margaret and Joan. It is a tall statue standing in a prominent position in the central apse of Monreale. Joan supported Constance de Hauteville, daughter of Roger II and Beatrice of Rethel, as the next regent of Sicily. She was promised to marry Henry VI who was the son of the Holy Roman Emperor Frederick Barbarossa.

Constance was the incumbent queen of Sicily as well as Holy Roman empress by her marriage to Henry VI. Her life was tumultuous. Tancred, Constance’s nephew, was still holding on to power preventing Constance from taking on her heritage. He confiscated her vast estates. Henry’s father was Frederick Barbarossa. The couple had to stay in Germany while he was still alive. Upon his death in 1190 Constance and Henry were crowned Empress and emperor. However, they were still battling to take ownership of Sicily from Tancred, Henry having to be away on battles. Tancred held Constance captive in Castel dell’Oro near Naples after Joan of England, widow of William, had forcefully expressed he should let Constance take her rightful place as queen of Sicily. She was finally released in 1192. Her health was frail. She was not able to join Henry for the coronation, because she was pregnant and stayed on in Iesi on the mainland. Constance was forty by now and had been married for nine years, most of them spent fleeing or being held prisoner. She worried that the people would question whether the child was hers. She decided to give birth in a pavilion tent in the market square of the town and invited local women to witness her giving birth. A few days after the birth she returned to publicly breastfeed the baby.

However her life remained short. She died in the year 1198, having put her son Fredrick under the guardianship of Pope Innocent III and having Frederick crowned king of Sicily. Henry died in 1197. An illustrious life lay ahead of Frederick who was crowned King of the Romans in1212 and Holy Roman Emperor in 1220. He initiated one of the earliest law treaties in history, the Assizes of Capua. He remained in charge of Sicily for over fifty years.