Regularly frequented by three species—the leatherback, the olive ridley and the green turtle—the beaches of French Guiana are some of the best in the world for turtle-watching. Donna Mulvenna, author of forthcoming book Happiness is Green published by Stormbird Press shares this incredible experience.

Donna Mulvenna is a writer and editor living in French Guiana. The author of Wild Roots — Coming Alive in the French Amazon, and the anthology All Animals Breathe Alike, Donna offers a close-up glimpse of the rainforest, reveals the profound effect it has on each of us, and encourages people to form a personal connection with the natural world. When not tending to her food-forest or working from her treetop office, Donna is trekking through the rainforest or sprint canoeing along some of Amazonia’s wild rivers. She refuses to own a mobile phone, rarely wears shoes, and is passionate about living on a plant-based diet. ‘Happiness does find us,’ she says. ‘We just have to slow down and lighten our load a little. Only then can we discover the wonder and awe in our world, and in the process gain a true sense of who we are, why we are here, and where we are heading.’ https://stormbirdpress.com/our-authors/donna-mulvenna/              https://donnamulvenna.com/ 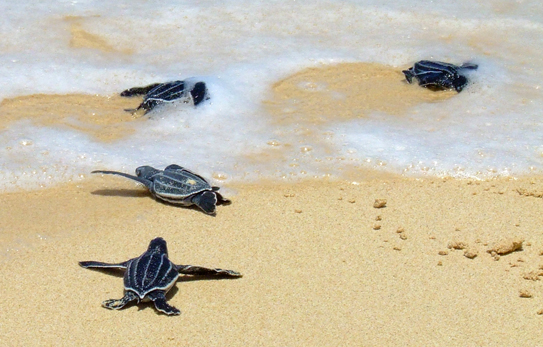 The grinning turtle painted on the crumbling wall seemed to wink as we carried our sea kayaks onto the beach. The turtle carried a bindle with the word Guyane, the mural reflecting pride that this was a beach leatherback turtles colonised.

The chocolate-coloured ocean turned a metallic grey under the flamingo-pink sky, and tiny jewel-like pebbles sparkled underfoot. Stories of a roused ocean tossing kayaks into the shipping lane abounded, but today a tender breeze placed sweet kisses on my cheeks, salty air lingered on my tongue, and a pungent scent of coastal mud seeped into each nostril. The horseshoe-shaped beach stretched far into the distance. I searched for early morning walkers, but apart from two fishermen there was no one. A furlong away a round object tumbled in the sea foam.

‘I’ll be right back,’ I said. My boyfriend, Frank, nodded as he stowed fresh water into a kayak.

I hoped to see an exotic seed pod but it turned out to be an ordinary coconut shell. Plucking it from the sea, I shook out the sand. A crab—a coconaut—stowed in its vessel toppled onto the ground at my feet. Startled, we gawked at each other, until it raised its pincers in protest. I sidestepped as it scurried backwards on the tips of its pointed legs before disappearing into a hole. I tossed the empty husk, finely polished by salty brine, back into the sea for another creature to make its home.

Dotted along the shoreline were piles of driftwood. Dismissing the wet sand, I plonked beside a large heap and tugged a log free. Dampness soaked through my shorts as I traced my finger along the sea-bleached grain.

‘Donna,’ Frank called out, gesturing I return to the kayaks.

I shifted my weight onto my arm to stand up, but a nearby movement caused my head to spin left.

Did that sand just move?

The surface shifted again, indisputable this time. When the sand caved in, I scooted away on my backside. When my eyes had turned dry from staring at the spot, a tiny creature poked its head out, its identity hidden behind an optical illusion of sand-rimmed spectacles. Moments later, a flipper broke the surface and a baby turtle flopped out. It stopped, one soft fore flipper wiping an encrusted eye, and thrashed its tiny flippers until it reached the top of the mound. With a better vantage point, it lifted its head and stared. It blinked twice as if to comprehend the bright horizon. Then, as if the feel of sea spray had energised it, it scrambled down the side of the mound and set off in a wild race towards the sea.

‘Frank!’ I yelled, standing tall and doing a backward wave.

Frank didn’t move but beckoned for me to return to the kayaks.

‘Come here,’ I shouted, flailing my arms around like a castaway sighting a rescue plane. He dropped his kayak paddle and bounded across the beach, bending once to pluck a plastic bottle from the sand.

‘Look! A baby turtle.’ The ground boiled as the bodies of a hundred tiny hatchlings piggy-backed off each other in a skirmish to leave their nest.

‘Wow! It’s a leatherback,’ he said. His grin widened as I bounced on my feet.

Seconds later, a dozen hatchlings popped up through the sand like jack-in-the-boxes. Every time I thought the procession had ended, another handful hoisted themselves from the sandy depths.

I stepped forwards to help the leatherback hatchlings out.

‘Stop!’ Frank held up his hand like a traffic cop. ‘Don’t help them. They need packed sand to crawl up.’

‘How do you know?’ I asked, tilting my head.

‘It was on an information board in the car park, alongside the turtle mural,’ he said. ‘There is also a twenty-metre distance rule.’ I suspected he was mentally calculating the distance between me and the nest so I took an exaggerated step back.

Resembling tiny wind-up mechanical toys, the hatchlings scrambled over the sand, urgently navigating my footprints that had created canyons and floundering over the piece of dropped driftwood which had formed a wall. I snatched up the wood as a group of hatchlings scooted down the final slope, braving breakers that rushed forward in white sheets.

Calls from seabirds coincided with early morning dog-walkers arriving on the beach. Two unleashed dogs hurtled towards me, one a short-legged bulldog with a head smaller than its neck, the other an energetic terrier that yapped.

I turned towards Frank and waved a piece of wood. ‘Grab this,’ I shrieked.

He had already turned and was jogging towards the dog owners, waving his arms.

‘Put your dogs on a lead!’ I shouted. The desperation in my words rasped my throat. Adding to the frenzy on the beach, I turned to the turtles sprinting along the sand and yelled, ‘Come-on Ninja turtles. Run!’

Standing between the hatchlings and the hounds, I prepared to tackle menacing mutts. The largest dog obeyed his owner and was safely leashed, but the noisy terrier hung onto his freedom. Its owner chased it around the beach.

Another hatchling brigade rushed into the sea, their internal magnetic compass guiding them to a place they had never been. The yapping dogs, the commotion of the seabirds, and my shrieks reflected the vigour in which they swam for their lives. Weighing less than the golf balls they resembled, they bobbed in the rolling waves. Some hit the water at the apex of its upward movement, shooting out to sea on a seaward slide. Others collided with the incoming current, jostling from side to side before turning on their tiny flippers and frantically swimming back in line. Another group crashed into a wall of white foam and boomeranged back onto the beach. They righted themselves with wide rotations of their heads, blinked to recalibrate, and continued undaunted.

One lone turtle hit a wave at the wrong time, was tossed around like a lottery ball, and dumped on its back far up the beach. I sized up an incoming wave, heard the yapping terrier still unleashed, and charged towards the hatchling like an anxious parent. Dropping to my knees, I gently tipped the turtle right-side up to continue on its frenetic pace.

A darkly tanned fisherman approached me. ‘It’s just nature,’ he said. ‘Hundreds won’t make it out to sea and you can’t save them all.’

‘I can save this one,’ I said, stepping away from his strong fish guts odour. I followed the hatchling to the water’s edge. A wave washed over it, but it dove under the next one carrying out a series of rapid front-flipper power strokes before rising to the surface in a four-flipper dog paddle to take a breath. It swam against the next wave doggedly maintaining its direction. With squinted eyes I watched until distance concealed its bean-sized head.

Frank returned. ‘Did you pick one up?’ he asked.

‘I flipped it onto its feet,’ I explained. I had fought a strong misguided instinct to hold the defenceless turtle in my hands and hug it tightly to my chest.

The hatchlings triggered a storm of emotions—love, compassion, and activism—within me. I questioned how any humane person could walk past and not help. The baby turtles appeared so helpless, their instincts leading them into waves too big and rough for them, their journey filled with risk—sea birds, fish, and crabs. The net bundled in the fisherman’s bucket served as a reminder of future threats—strangulation by floating trash in their environment or entanglement in ghost nets.

Frank and I high-stepped across the vine-covered dunes back towards our kayaks. I’d forgotten he had picked up a plastic bottle which he threw into the hull. I gazed at him, grateful he’d persuaded me to visit the beach at dawn where I had been able to save one little turtle. In a real sense, the turtle helped save me. It guided me through life as a human being, not as a human liability, and made me feel closer to my own real home.