Why write a book on History of Hinduism? by Professor R Ramachandran

R Ramachandran is a retired professor of Geography from the Delhi School of Economics, University of Delhi. He has held positions as the Head of the Department of Geography, the Dean of the Faculty of Social Sciences, and the Director of the Delhi School of Economics at various points in time. His first book Urbanisation and Urban Systems in India, was published in 1989 and has been reprinted every year since. After retirement in 1996, the author has been devoting himself full time to the study of Hindu scriptures in original Sanskrit. In 2010, he published his first book on the nature of Hinduism—Hinduism: In the context of Manusmriti, Vedas & Bhagavad Gita.

The author’s deep interest in Hinduism is the direct result of his ancestry from an orthodox community of Brahmanas and his feeling of indebtedness to his ancestors. The book is in the nature of a historiography and reflects the author’s perceptions as a member of a Brahmana community as well as his professional training and experience as a social scientist. 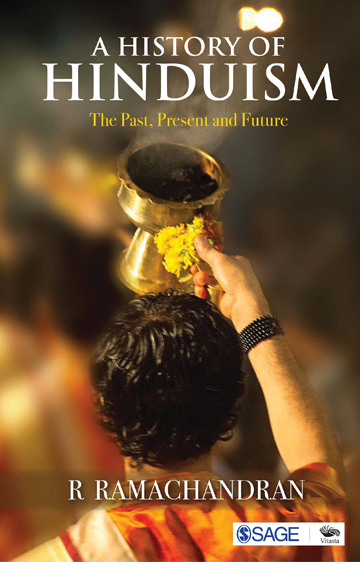 The answers can be varied. However, I have written a book on a history of Hinduism because I am passionately attached to the subject matter of the book. I was never a religious person, but I do value my childhood experiences and I do take a little pride with my heritage. The book is the result of a lifetime of devotion to the subject matter, the purpose being to unravel the mystery of Hinduism. I may add now that the objective is also to help Hindus and non-Hindus to understand the religion better.

The history of Hinduism was a series of puzzles within puzzles and no one had a satisfactory solution.  When I entered college as a student in the 1950s, I found the situation very baffling; my immediate response was to get away from it all. I became an agnostic.

Nevertheless, I could not get away from the subject of religion altogether, for I was destined to become an academic in the area of social sciences. My student days widened my understanding of religion. I did an honors course in geography at the University of Madras and I was drawn towards a subject that was called ‘human geography’ which is more or less the same as social anthropology. I learned about the relationship of man and environment with the whole world as the laboratory.  Later in my life when I studied Rigveda in original Sanskrit, it immediately struck me that the Rigveda should in fact be interpreted as a study in human ecology.

I had also developed an interest in early Indian History; one of the books that I bought early in my teaching career was An Advanced History of India  by three authors – which was a standard text at that time. I widened my knowledge by reading other texts and my favourite authors were A. L. Bhasham and Romila Thapar. These forays into history equipped me to write two chapters on the history of urbanization in India in my first professional book on the subject (published in 1989).

Despite the broadening of my knowledge of history, I was unable to make sense out of the history of Hinduism. I realized that I had to learn Sanskrit and study the Hindu scriptures in original if I want to understand Hinduism. English translations of Hindu scriptures are not adequate and one has to go to the original. This is what I did after retirement in 1996. In over a decade of labor I published my first book on Hinduism. At that time I thought I had done a good job and that I was able to present a holistic view of Hinduism. Still, I was not fully satisfied. While I did cover the multi-dimensional aspects of Hinduism through a critical review of its principal scriptures, I failed to produce a coherent narrative of its evolution from Rigveda to the Puranas. This prompted me to do further reading on Upanishads, epics and Puranas; aspects that I had neglected in my first book.

For a coherent narrative of the history of Hinduism we need several paradigms. I discovered three during the course of my reading. The first was to establish a clear chronology of Sanskrit texts on Hinduism. This would not seem to be too difficult but for the fact that the texts as we understand it today did not exist in the past. Take for example Rigveda. The tribal communities in the Indus basin had no written texts and what they knew varied a lot from one tribal community to another; that is why Brahmanas invariably used the word ‘shakha’ (branch) in relation to the Vedic study. Secondly, the ten thousand and odd verses were composed over centuries; and I would think that most of the verses were composed during the Mimamsa or later Vedic period. All the early Vedic texts had a vertical dimension covering centuries.  Hence one has to use a dual approach: treat history as happenings over a specific time period or treat history as process over time. One could also combine both the approaches. I think I have managed to do this pretty well in my new book.

A second paradigm is a geographical one. This involves the migration of Rigvedic people from the Indus basin to the Yamuna basin around Delhi, and then on to the middle Ganga plains in eastern Uttar Pradesh and Bihar. External forces compelled the Rigvedic people, in particular Brahmanas, to take two more migratory leaps – the first to the valleys of the Narbada and Godavari and the second to the Cauvery delta in the far South. This five stage model of migration combined with the chronology of Sanskrit texts forms the back bone of my book on the history of Hinduism.

However, the two paradigms are not quite enough; they only tell us what happened and not why. The texts in Sanskrit were written, for the most part, by Brahmanas. The question then is what motivated them to write these texts? This leads to the third paradigm. Sanskrit texts were written by Brahmanas so that they can earn a living. When the tribal Rigvedic society merged into the peasant society around 1000 BC, they devised a system of life cycle rituals, which was later elaborated and came to be known as Mimamsa. In the same way, newer texts emerged from time to time. The emergence of Buddhism and Jainism and the influx of Yavanas (Greeks) and others had remarkable consequences. The result was a shift to a Brahmana-Kshatriya coalition as envisaged in the Smrities and later in epics and Puranas. The Puranas introduced Gods in human form and idol worship as the new and common form of worship. This to a large extent replaced the Vedic form of worship, namely, homa and the worship of the fire God.

Brahmanas earned respect from the ruling class who were for the most part from among the Shudras, particularly in central and south India. Brahmanas were treated well in the South with large land grants and a new form of settlement known as agraharam came into being. I have visited many agraharams and lived in one for short periods of time. Brahmanas who lived in thousands of such agraharams in the South practiced both the Mimamsa and Puranic religions. While the practice of Mimamsa was a debt that they owed to the Rigvedic poets, Puranas and associated forms of worship connected them well with local cultures. The Puranas eventually became a composite religion in itself serving a wide audience of the ruling class and the upper sections of the rural society. Nevertheless, the tribal gods, rural village gods, and regional gods and associated forms of worship continued their sway without any input from Brahmanas, who were generally absent from a majority of villages both in the North and the South.

The development of the Puranic religion has more to do with peninsular India than the Ganga Plains, clearly a reflection of Brahmana migration to the South. Further, Brahmanas interacted closely with the Tamil culture in the Cauvery basin; The Tamils in the far South had already developed an advanced culture with their own literature. They had a religion of their own and various forms of worship based on temples of Gods. The Tamil bards – Nayanmars and Alvars – propagated the bhakti form of worship, which was already in existence from the Sangam period – from 300 BC- to 200 AD. The presence of Brahmanas lead to the Sankritisation of the Tamil culture and gave rise new languages of the South.

The rise of the bhakti movement in the South through the contributions of Ramanujacharya, Madvacharya and Basava in the 11th and 12th centuries had a lasting impact not only in the South but the whole of the North as well.

At this time the North has come under the influence of Muslim rulers and the Mimamsa religion had been almost eliminated for lack of support from the ruling class. Puranic religion and forms of worship influenced by the bhakti movement replaced the old Vedic religions through the contributions of Tulsidas, Surdas, and others. The epics took hold of the North, leaving the Vedic religion to the agraharams in the South. The Vedic religions further collapsed when British rule covered the whole of India including the South. In the South the decline of the Vedic religion started in the middle of the 19th century.

Hinduism does not entertain the idea of conversion; Brahmanas never tried to convert the tribal or even the rural folk to Vedic forms of worship; Vedas and Vedic religions were almost entirely confined to Brahmanas; others, particularly Kshatriyas and Vaisyas participated as ‘yajamanas’; in return, they gave gifts to Brahmanas. Brahmanas as a priestly class were always self-employed. From 1000 BC they competed with each other for patronage from Kshatriyas and Vaishyas.

There is no hierarchy among Brahmanas and no organization that exercised control over them.

The priestly class of Brahmanas has been reduced to middle or lower middle class status during and after British period and Vedic Hinduism has all but vanished from the agraharams in the South. Brahmanas, a majority of them, are now well educated but delinked from their traditional occupation. They have practically no knowledge of Sanskrit or Vedas.

The rural folk religions of India remain as vibrant as ever.