Making Development Sustainable, The Challenge Ahead by Prem Shankar Jha

Prem Shankar Jha is an independent columnist, a prolific author and a former information adviser, Prime Minister’s Office (India). He completed his master’s in philosophy, politics and economics from the University of Oxford in 1961. After working for five years for the United Nations Development Programme in New York and Damascus, he returned to India to pursue a career in journalism. Over the past few decades, he has been Editor in The Economic Times, The Financial Express, and Hindustan Times, and the Economic Editor in The Times of India.

Jha has been a visiting scholar at Nuffield College, University of Oxford; Weatherhead Center for International Affairs and Fairbank Center for Chinese Studies, Harvard University; University of Virginia; University of Richmond and the Indian Institute of Management, Kolkata. He began research on alternate fuels in 1980. He has written extensively on them and their significance for the environment. In 1985, he was nominated to the energy panel of the World Commission on Environment and Development. In 1988, he was awarded the Energy Journalist of the Year award by the International Association for Energy Economics.

Jha has many published works to his credit. Some of them are given as follows: India: A Political Economy of Stagnation (1980), In the Eye of the Cyclone: The Crisis in Indian Democracy (1993), A Jobless Future: Political Causes of Economic Crisis (2002), The Perilous Road to the Market: The Political Economy of Reform in Russia, India and China (2002), The Origins of a Dispute: Kashmir 1947 (2003), The Twilight of the Nation State: Globalisation, Chaos and War (2006), Managed Chaos: The Fragility of the Chinese Miracle (SAGE, 2009), A Planet in Peril (2009) and Crouching Dragon, Hidden Tiger: Can China and India Dominate the West? (2010). 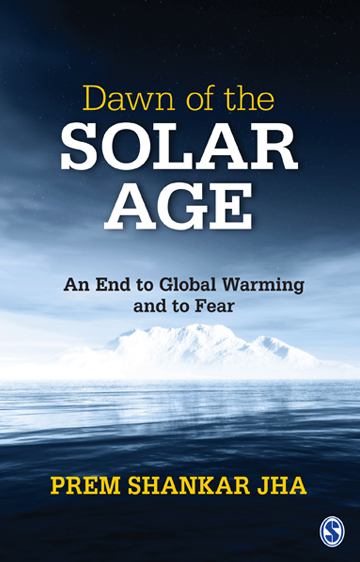 In contrast to most books on Global Warming, ‘Dawn of The Solar Age-An End to Global Warming, and to Fear’ concentrates not on the threat that Climate Change poses to humanity, but on what needs to be done to avert it. It begins by describing how the threat was identified, as far back as in 1969, and goes on to highlight a second threat to Humanity’s future. This is the finding by two recent studies that the Club of Rome’s 1972 warning, that the attempt to achieve exponential growth on a finite planet will lead to economic collapse by the middle of the 21st century is also dead on track. It concludes that  nothing short of a complete shift of our energy base out of fossil fuels, will  avert these twin threats and  points out that Humanity has very little time left in which to do this.

However, it asserts that contrary to near – universal belief, an alternative to   fossil fuels not only exists, but has always existed. This is the boundless energy of the Sun. And again, contrary to general belief, the technologies that can harness this energy not only exist, but have been under development for the past forty to a hundred years.

Five core chapters of the book describe what these technologies are. They also show that far from being uneconomic they have now reached a stage of maturity where they can compete with little or no subsidies.  However their deployment has been delayed by an over reliance on the Market Economy to choose the right technologies. And the Market Economy, which is governed by the search for ever-quicker profits, has been leading investors and governments up a succession of blind alleys.

Two examples are Solar Photo-voltaic and wind power. Both have seen phenomenal technological advances that have made them have become cheaper than coal-based power but both have one crucial drawback that prevents them from replacing it. This is that they generate power intermittently: neither has been able to supply power for more than a quarter of the hours of the year. Solar PV is at least predictable, but wind is not even that.

The second is that Thin Film technology, which is responsible for boosting the efficiency of solar panels, requires cadmium and tellurium, and there simply isn’t enough of either in the earth’s crust to replace even a significant proportion, let alone all, of the power generated from fossil fuels today.

Battery storage can increase the availability of Solar PV power, but it faces the same problem: With today’s technology there isn’t enough minable Lithium in the earth’s crust to meet the demand for Lithium-ion batteries to store PV power, let alone the millions of electric cars that the auto majors have promised to roll out in the next dozen years.

While the market has relentlessly promoted Wind and Solar PV power, it has neglected the one source that can meet base load demand. This is Concentrating, Solar-thermal (CSP) power. CSP has begun to deliver power round the clock because it can store the sun’s heat in molten salts for long periods at negligible cost.   CSP power plants are simple to construct, require only mild steels and other easily available materials of which there is no dearth. They also fit into the energy infrastructure of the world without creating any ‘stranded assets’. In the past three years the cost of generating power from CSP power stations has  fallen rapidly, till it is now well below the average sale price of power in the US and Western Europe.

The Sun can also meet humanity’s need for transport fuels and petrochemicals via biomass. The technology that does this is the Gasification — also called destructive distillation — of biomass. This yields mainly carbon monoxide and hydrogen, which are the basic building blocks of the entire petrochemicals industry.

Biomass was used as a feedstock for producing methanol — an alternative to ethanol as a transport fuel — in the early twentieth century till it was supplanted by natural gas. When oil and gas prices shot up in the seventies and again in the 2000’s, it could easily have been revived, but by the search for alternatives to fossil fuels then  in the industrialised countries had focused on power generation to the virtual exclusion of transport fuels. As a result, the only biomass based transport fuel that has come into general use so far is ethanol, which is produced by fermentation.

Despite the fact that outside Brazil the replacement of gasoline with corn-based ethanol has ground to a halt, and cellulosic ethanol has so far been a non-starter, there has been virtually no attempt by policy makers to explore the gasification route to transport fuels and petro-chemicals. But developing countries, and particularly the oil importers among them, cannot afford the luxury of neglect, because for them this is the shift of energy base that holds out the greatest promise for the future.

The biomass that they have in abundance is crop residues and urban solid waste. Transforming these into transport fuels or petro-chemicals will not only save them  valuable foreign exchange, of which most of them are chronically short; but clean up their cities by giving a monetary value to  every scrap of  solid waste.  On the farms it will   double incomes by enabling the farmers to sell their crop residues in addition to their main crop. It will at the same time reduce farmers’ vulnerability to drought by leaving them at least the crop residues to market, if their food, or  main cash  crop fails.

Longer term impact of the shift to solar energy

The longer term impact of the shift to solar and biomass energy will be to close the ever widening between the global North and the Global South, and the urban-rural income gap in the developing countries. Desert, arid and semi-arid areas of the earth, which cover two thirds of its surface, will become the sites for solar power generation, as is already happening in Australia, California, Israel, Dubai, Morocco, Saudi Arabia, China, and India.

Lastly, the decentralization of energy production will decentralize urban development, and avoid the creation of megalopoli, and the economic and social cost that their management entails.

I have saved the best for the last. If solar energy can replace fossil fuels then every country will be able to generate it, in one form or another, all over the world. This will eliminate the need for assuring a continuous supply of oil and gas that many consider the most important underlying cause of the near-constant war that the world has witnessed in the last three decades.

What the shift out of fossil fuels entails

How fast does the transition out of fossil fuels need to be?  The consensus target, which is reflected in the IPCCs 5th Assessment Report of 2014, is to bring the net emission of fossil fuels down to zero before the end of the century. But this is not fast enough to stop global warming and limit   climate change. This is  because CO2 concentration will have reached 450 ppm or thereabouts by the time that happens, and 30 per cent of the CO2 added till then will remain in the atmosphere for another  100 years,  while 15 per cent will continue to affect the climate for the next 1,000 years. To get an idea of what the full impact on climate will be, we need to remember that in the Pleiocene period, three million years ago, when the CO2 concentration in the air was only 360 ppm, and the mean temperature was 3oC higher than it was in 1900, the whole of south-western Africa was a sea of shifting sand, the American South-west and all but a small part of south-Asia was a desert and the sea level was several metres higher than it is today.

To survive, therefore, the world needs an even stricter target: As James Hansen had warned some time ago, we must bring the concentration of CO2 back to the 310-312 ppm that had existed in 1950. That will be only 30 ppm above the pre-industrial average and will stand a good chance of re-establishing the equilibrium in the biosphere that has existed for the past 7,000 years.

The IPCC’s 5th Assessment Report has also calculated that the CO2 added to the atmosphere will increase from 531 GT over pre-industrial times in 2012 to 723 GT by 2030. That will push CO2 concentration up from the present 404 ppm to over 420 ppm. Since 7.8 GT of CO2 needs to be extracted to reduce its concentration by one ppm, our target has to be  to take more than 700 GT out of the atmosphere between 2030 and 2100, an average of 10 GT a year.

The world will attain this target only if it is able to shift out of fossil fuels by 2060 at the latest. Nature’s sinks will then do the rest by taking approximately 18 GT (billion tonnes) out of the atmosphere every year.