Sujit Kumar Chattopadhyay is former Chairman, West Bengal Regional School Service Commission (Western Region), Bankura. Prior to this, he was Associate Professor and Head of the Department of Political Science, Bankura Zilla Saradamani Mahila Mahavidyapith, West Bengal. He has done PhD on ‘Gender Inequality, Popular Culture and Resistance: A Case Study of the District of Bankura’, under the guidance of Professor Harihar Bhattacharyya from the University of Burdwan, West Bengal, in 2006. His published works include the books Revisiting Vivekananda: From Revival to Renaissance (2015), Gender Inequality, Popular Culture and Resistance in Bankura District (2016), Fighting Gender Inequality: A Tribute to Nirbhaya (2015), Samajchitre Loksahitya (2017), Loksahitye Narir Sthan (2017) and the edited volume Politics of Discrimination and Problem of Democratic Governance: Issues, Experiences and Challenges (2009). He is also the author of an anthology of poems in Bengali and some texts on gender and folklore. He has many published papers to his credit. 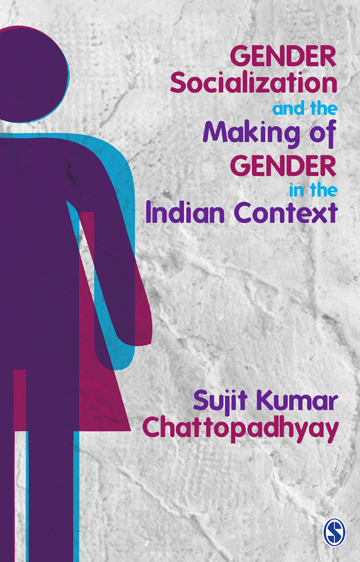 Since, unlike sex, gender is social and cultural construct, the process of gender socialization has a great role to play in the shaping of personality. As sex is assigned at birth, gender is assigned at the social and cultural level and it is never a matter of individual choice.  Human being, men or women, pass through a number of primary and secondary groups, organizations and institutions since their birth and thus, they are influenced regarding their notion and approach to gender. The process of gender socialization through different agents like family, peer group, school, media, religious norms and practices and religious myths and concepts is the most important process of internalizing the gendered norms and practices. Through gender socialization, the concept of gender comes to be implemented as a result of which a boy is inspired to be masculine and a girl is encouraged to be feminine and thus, gender socialization makes it difficult for boys and girls to be something like ‘humankind’. Thus, this book documents the techniques and the operation of patriarchy by which people, especially the girls and the women, come to be socialized in respect of gender stereotypes, gender roles and gender norms and practices.

Patriarchy makes this operation possible through very many social organizations, institutions and religious and cultural norms and practices which undermine the position of the women on the one hand and on the other hand, strengthen the command of the male authority. In order to reinforce these norms and practices in favour of male, various organizations and institutions (which are presented as agents of gender socialization in this book) are used for providing ideological support to this process. So unfolding the proper role of these organizations and institutions is very important for understanding the process of gender inequality and gender discrimination in general and gender socialization in particular. Perhaps the objective and the unique role of these organizations and institutions is aimed at convincing  women that the discriminatory gender treatment they are getting is perfectly natural as far as their biological and psychological nature is concerned.

Agents like family, peer group, school, media and religion have come to justify gender inequality by forwarding the necessity of functionalist stratification. Functionalism is the doctrine that social institutions and practices can be understood in terms of the functions they carry out in sustaining the larger social system. This theory is presented by Kinglay Davis and Wilbert Moor (1945) as the theory of functional stratification. To them, stratification is always a functional necessity in any society and importance of any individual or group must be proportionate to the roles they perform. Subsequently this theory was also applied to the field of gender-based stratification. It is argued that there are differences between male and female in respect of their biological and psychological traits and it is such difference based on which the social role of each gender is determined. Thus, it is seen that the regulation of social system, from the functional point of view, has resulted in strengthening the domination of man over woman in all societies and across all culture.  Talcott Parsons (1902-1979) was a renowned preceptor of functionalist theory. To him, family directly works on the basis of sexual division of labour where women perform their role of child bearing, child rearing and providing mental and spiritual support to their children.

Another functionalist perspective of child rearing has been presented by John Bowlby who argued that ‘The mother is crucial to the primary socialization of the children’.  In fact, Sexual Division of Labour is different from the general view of Division of Labour. It is argued, ‘Sexual Division of Labour is a division of work not between equals but between superiors and inferiors; (and) a relation which is imposed on women by social pressure’.  In this way, biological and physiological differences create a difference in social role acquisition of male and female, highlight the gender role and resultantly gender inequality emerges as the retrogressive feature of the society.  The intervention of different agents in the field of making of gender through gender socialization make the entire operation of all these agenda of patriarchy very easy and smooth. In this way,  different agents i.e. these social and cultural organizations and  institutions like family, school, peer group, media, religious norms and practices and religious myths and concepts continuously provide an ideological support to the gender ideology modeled upon patriarchy through gender socialization and accordingly legitimize their functions.

The book argues that if the ideological and institutional techniques of gender socialization (modeled upon patriarchy) are not properly understood, the struggle against gender inequality is bound to be futile. It is argued here that if the social and cultural institutions, organizations and religious practices are restructured with a gender free outlook then perhaps we will not have to lament as Beauvoir remarked, ‘One is not born, but rather becomes, a woman…’. It is also argued that if the complex domain of gender socialization can be changed with a more moderate and progressive approach, then it is possible to create and seek a better world for women. If the traditional social, cultural and religious arrangements are restructured with a view to achieve gender equity then it is possible to allow the development of women in a more free and voluntary manner.  The problem with regard to the study of the agents of gender socialization is that these agents are not static. Rather they are very much dynamic so far as the impact of technological inventions and globalization is concerned. The structure, nature and process of operation of all the organizations, institutions and practices have changed a lot in post-modern period. So, with all such changes in the nature and functions of different social institutions and religious norms and practices, gender socialization and its appeal must be changed a lot and  the hints of these changes can be received in the book: ‘Gender Socialization and the Making of Gender in the Indian Context’.

This book is a step forward towards the formation of a new concept about gender and gender related norms and practices. The content of the book is discussed in different chapters under two sub-headings: Themes and Perspectives. Discussions under themes are aimed at exposing the interrelation between gender study and social psychology, disseminating the theoretical aspects of gender with the exposition of its meaning, formation and effects and at introducing gender socialization as a new area of study covering all the theoretical details of its meaning, nature and scope.  Discussions under perspectives aim at revealing the role of agents of gender socialization, the key-content of the book.

Theoretical attempts for examining gender from newer angle are meager. This book has responded to this long-awaited problem. A serious social scientific study of interrelationship between agents of gender socialization and the process of gender socialization is absent in the existing studies of sociology. No serious attempt has been made so far in studying as to how various organizations and institutions such as family, school, peer group, media and religion can be used as ideological tool for making of gender, especially, in the Indian context and also for degrading the status of the women, not only in India but in all societies and across all cultures. This study is an attempt to fill the gap. This book is not similar to any other book and it is an inter-disciplinary research work. With a lengthy and useful bibliography this book would benefit the students of gender study, sociology, rural sociology, social psychology, film study, comparative religion, media culture and also the film makers, social activists and policy makers.