S K Kulshrestha is an internationally renowned urban and regional planner with five decades of experience in teaching, research and professional practice.

This article is based upon the Author’s forthcoming (2018) book ‘Urban Renewal in India: Theory, Initiatives and Spatial Planning Strategies’, (Sage Publication, New Delhi, India) and may be referred to for further details. 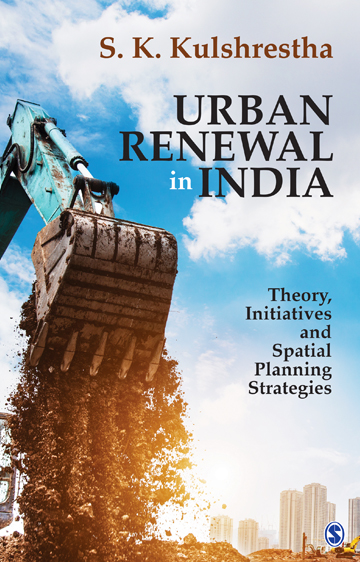 India is progressing on the path of change.  There appears to be change everywhere including   approach to spatial planning. The current (2018-2019) political climate, in the country, is favourable for this transformation.   Action in one hundred cities has started for transforming them to be smart under the Smart City Mission. Some 500 cities are being regenerated under the Atal Mission for Rejuvenation and Urban Transformation (AMRUT).  Railway Ministry is redeveloping 400 railway stations in the country to improve their functional efficiency and make them attractive to the passengers. To attract tourists to explore India and have unique experience, Ministry of Tourism has launched two initiatives   which include (a) redevelopment of 13 theme-based tourist circuits under Swadesh Darshan and (b) renewal of 23 tourist destinations under Pilgrimage Rejuvenation and Spiritual Augmentation Drive (PRASAD).

Starting since 2006, with the introduction of Jawaharlal Nehru National Urban Renewal Mission (JNNURM), urban renewal has become a strong public policy supported with impressive fund allocation by the Government of India. It indicates the political will to transform cities, improve their quality of life and functional efficiency and make them vibrant and liveable centres of economic opportunities. The present Government has allocated a combined sum of INR 113,123 crore[1] up to the year 2020.

Indian cities are aging and about 1,800 cities are more than 100 years old. The core areas of most of   existing cities are congested and dilapidated due to unplanned growth and lack of infrastructure. Due to introduction of liberalisation of economy, in 1991, and resultant impressive flow of foreign direct investment, large cities and their peri urban areas have become centres of attraction and preferred destinations for investment. Their liveability, however, is poor and require rejuvenation.

By 2050, more than 50% of the country’s population is projected to be living in urban centres. There is a trend of excessive concentration of urban population in million-plus (M+) cities. This is evident from the fact that in the year 2011, there were 53M+ cities accommodating 42.63% urban population. Large cities and their peri urban areas are under stress to accommodate ever growing urban population meet economic development demand. The result is unplanned urban sprawl and rapid transformation of villages from rural to urban centres. On the other hand, there are several planned and unplanned areas, within municipal limit of these cities, that are unutilised or underutilised and form fit cases for redevelopment.

Urban renewal, in India, is not a new subject and has been in practice since 18th Century. Shahjahanabad, the Walled City Delhi, was rejuvenated after its destruction by Nadir Shah (1739).   The British soldiers destroyed Shahjahanabad after the 1857 mutiny (the First War of Indian Independence) and city was redeveloped and the historical mosque, Jama Masjid, was conserved with great difficulty as a religious place because there were different proposals regarding its use.

In early 20th Century (1919), Patrick Geddes redeveloped Bara Bazar in Calcutta (now Kolkata) Urban renewal, in the Post Independence Period (after 1947) has been, generally, limited to slum clearance and improvement. Master plans of various cities incorporated urban renewal policies and programmes which, among other proposals, included upgradation of slums and decongestion of city core area. These policies, however, were implemented in piecemeal manner with hardly any visible impact. Large and polluting industries were closed down in Delhi and Mumbai, but, nothing was done at the vacated mill sites for decades.

Large number of people living in slums in India constitute solid vote banks and attract political patronage. As a result, renewal of slums has became a regular and popular exercise before elections. This trend, to harness vote bank through improvement of living conditions in slums, is likely to continue in future.

In India, the land, land use and land management are subject matters that fall in the functional domain of the state governments. Accordingly, the national initiatives remained limited to urban renewal programmes and guidelines to be implemented by the respective state governments and their urban local bodies (ULBs).

JNNURM was the first programme of the Government of India that earmarked, for urban renewal, a large sum of INR 100,000 crore. The present NDA (National Democratic Alliance) Government introduced many programmes for urban transformation in 2014-2015. These programmes include   Smart Cities Mission, AMRUT, PRASAD, Swachh Bharat Mission, Heritage City Development and Augmentation Yojana (HRIDAY), and others.

Among cities, Delhi appears to be the most comprehensive in term of addressing the issue of urban blight. The Master Plan for Delhi 2021 covers the entire city and has identified four types of areas for urban renewal   which include (a) special areas   comprising traditional city core, (b) unplanned / unauthorised areas which include urban villages; unauthorised colonies; regularised- unauthorised colonies; and slums, (c) planned blighted residential, commercial and industrial areas, and (d) heritage areas located in the city. Theoretically, it is impressive but Delhi failed to implement most of the proposals.

Mumbai initiative appears to be a good example where urban renewal has been implemented with innovative approaches, tools and techniques which are being followed in other cities also. Redevelopment of Bhendi Bazar, Dharavi and textile mill area are good examples from the city. Initiatives of other cities were limited to  selected  areas of concerns which could be renewal of slums (Indore, Kolkata,), river front development (Ahmedabad), renewal of core area of city or heritage conservation (Kolkata, Mysore, Pune).

Urban transformation in India covers both spatial and non-spatial interventions and urban reforms fall in the second category. Reforms improve urban governance and ease the administrative, legal and technical bottlenecks to facilitate the process of urban renewal. JNNURM may be credited as the first reform-oriented programme of urban renewal that introduced 23 reforms.  Looking critically, JNNURM could only inculcate awareness regarding the need for introducing efficiency, accountability and transparency in functioning of urban local bodies. This had been due to the fact that to implement 23 reforms in a period of 7 years was a bit too ambitious. Some of the reforms that needed amendments in laws, and devolution of duties and functions to ULBs required political will, leadership and administrative support which seemed to be lacking, especially, in case of devolution of town planning function to ULBs.   Introduction of reforms like user charges required change in mindset of the people and politicians which is a long process.

In 2013, the reform agenda of JNNURM was carried forward by Rajiv Awas Yojana (2013-2022) which reduced the number of reforms from 23 to 9 and created a Reforms Incentive Fund to give fiscal incentives to encourage state governments to take up the optional reforms.

Following the new mantra – ‘reform perform transform’ given by the Prime Minister Narendra Modi,   the agenda of urban reforms continues under AMRUT. There are 11 reforms. These include 5 JNNRUM-reforms and 6 new ones. The new reforms include efficient urban planning.  These reforms are incentive-driven and time / target-oriented.  Attaining the milestone and meeting the timeline entitles ULBs to incentive reward. It is a new approach and appears to set a new work culture and healthy competition among ULBs.

Urban renewal is like harnessing a gold mine. Land in core areas of old cities and unutilised / underutilised areas, located within their municipal limits, have immense potential which needs to be utilised for resource mobilisation through land use planning and application of tools like Floor Area Ratio (FAR) and Transferable Development Rights (TDR).

Urban transformation efforts, should follow the following four principles which state that urban renewal should:

To be effective and acceptable to the stakeholders, urban renewal efforts need to address five common considerations which include:

As urban renewal is evolving in India, to build depositary of knowledge on the subject, outcome assessment, feedback and research need to be promoted. Marketing of urban renewal projects is another important action for the success of such initiatives and their acceptance by people. Urban renewal is the future of Indian cities. The next decade will be the decade of urban renewal.