Jyoti Mohan has taught numerous courses on South Asian, South Asian American, Asian American, and World History at the University of Maryland College Park, University of Maryland, Baltimore County, and Morgan State University. Most recently, she was a Lecturer at Morgan State University for 11 years. She currently serves on the Board of Editors for H-French-Colonial, after having served several years as Reviews Editor and List Editor. She is also a List Editor for an Academci Listserv on French–India academics. Mohan has published articles in French Colonial History, Journal of World History, and Francophone Postcolonial Studies, as well as in edited anthologies of academic essays like Beyond National Frames. 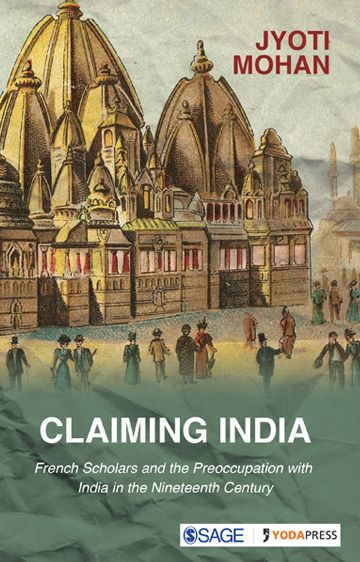 There is no such thing as a free meal. This book proceeds from this fundamentally cynical premise. France has produced the maximum number of Indologists of any European country. The first official permanent position in Indology was created at the Collège de France. Even apart from Indic studies, exotic terms from India like Rajah and bayadère (nautch girl) were thrown in most oriental novels and plays of the Nineteenth century. Why this fascination with India? What did France have to gain from investing so much time, money and resources into studying India?

Until 1763, there was a legitimate economic and political gain to be made. France was a contender for Empire in India and therefore any information about India would prove to be useful in ruling after conquest. French Jesuit descriptions of Hindu worship and custom seemed not only normal for a country ambitious to rule over India, but foresighted as well. The Jesuit descriptions were doubly useful since the religious zeal which spurred their movement took them deep into the country, thus making the interior accessible to the French by virtue of their description. While traveler and mercenary accounts of India tended to describe only Royal Courts and small courtly coteries the mission accounts described the deep interiors of the country, which would form the bulk of the Indian ‘colony’ and were therefore invaluable.

But French interest in India was never just about the description of the people and the land. In fact, the French almost went out of their way to overlook the contemporary reality of religion and custom when it came to Indic studies. While men who were actively involved in the task of building empire, like soldiers and colonial administrators often wrote detailed memoirs and accounts of their experiences in India, academics in France willfully ignored these contemporary accounts in favor of their own focus on a mythical, pure, Indic past based on Sanskrit, and an ‘Aryan’ heritage. Indologists in France, most of whom never traveled even once in their careers to India, spun translations of Sanskrit dharmic texts to place Indic religion and philosophy on a pedestal of a pure, untarnished past.

Curiously enough, the French obsession with all things Sanskrit continued even after France’s defeat in the Seven Years War (1756- 1763) definitively knocked her out of the running for an Indian empire, leaving the field wide open to British depredation. With the financial crisis looming over the French royal treasury, and the nation itself in an imploding social revolution, Indic scholars still continued their work on India. Through all the excesses and privations of the French Revolution and its aftermath, French scholars continued to study Indic texts. Granted, there were still a minority of Frenchmen who fantastically hoped for a return of France’s power in India, and who attempted, unsuccessfully, to orchestrate such a reversal of fortunes. But by the time Napoleon seized power and declared his intention to build an Empire stretching from Europe to China, all such schemes were over. As history tells us, Napoleon’s Empire died a natural death on the snow-clad plains of Russia, and Napoleon himself lost all semblance of imperial power once he was exiled to St. Helena.

All official claims towards colonizing India were relinquished by the beginning of the Nineteenth century. By the first quarter of the Nineteenth century, France turned her eyes towards North Africa, and later in the same century, towards South East Asia. Yet the Nineteenth century saw the most uniform effort for French academics to become masters of Indic studies. The Collège de France was the first institution to have a permanent position in Indology in 1814. Throughout the century, France, and particularly Paris, was the world leader in Indic studies. Again, what did France have to gain from this academic expertise? In a world of global empires, where India was now firmly ensconced as the jewel in the British throne, the French focus on Indic studies could have been better spent on studying French empire elsewhere- Algeria, or Indochina.

In ‘Claiming India’ I follow the French obsession with India in Indology as scores of Sanskrit texts were translated and commentated upon, and in the emerging fields of anthropology, sociology, and history. I note that the erudite interest in India was translated into the academic curriculum for schools and in the representation of India in the carnivalesque Exposition Coloniale of Paris in 1931. And circling back to that idea that nothing in life is free, I identify specific reasons for the French interest in India.

Early interest came from the Enlightenment and the desire to find an alternative to the Judeo-Christian narrative. To that end, China was also considered an alternative. Jesuit missions to India during the Eighteenth century focused on describing conversion tactics, obstacles to conversion and ways to overcome them. These mission chronicles were straightforward and had the sole intent of proselytizing. By the time French temporal ambitions in India were dealt a fatal blow, the ancient origins of Indian civilization had been recognized, and to some extent, scholarly interest in India arose from a desire to find common historical links between other ancient civilizations. This early nineteenth century was also an era of historical ‘discoveries’- the Avesta of Zoroaster, the Rosetta Stone of Egypt etc. The academic interest in India emerged by the middle of the nineteenth century to serve two very practical purposes.

Firstly, the rising interest in Gallicism in France had several scholars looking for common links to other ancient civilizations. India, identified by French scholars as having an Aryan past, could then be compared to the Gallic tradition of France. The story of Aryan invasion, conquest, rule, and gradual decline due to racial intermixing in India, could be used by French nationalists as a precautionary story. The Aryan story in India played a key role in bolstering Gallicism and racial purity movements in France.

Secondly, India’s Aryan past and admittedly great Sanskritic works, combined with France’s position as a minor colonial ruler in India provided the perfect trifecta to launch a powerful attack against British rule in India. France used her work on India to provide evidence that she was genuinely in pursuit of the mission civilisatrice, where she was altruistically motivated to educate and remind colonies of the heights they had once accomplished, and help them recover that position. Britain, on the other hand, was merely a leech, draining India’s resources for her own selfish profit. As Anglo-French political relations underwent the inevitable see-saw of Nineteenth century nationalism and jingoism, France employed India as a powerful tool in public opinion, constantly fêting notable Indian nationalists, and describing the British drain of India and consequent famines and epidemics in every journal and newspaper. Simultaneously, since the French India posts were not large enough to really prove a challenge, France practiced ‘responsible’ colonial government, providing the Posts with a rule of law and with rights that far surpassed the rights provided to other French colonies like Indochine and Algeria. French India was the perfect example of France’s mission civilisatrice, a beacon in the vast and ravaged landscape of the Raj.

How does this help modern India? ‘Claiming India’ fills in several pieces of the larger jigsaw puzzle of how a mythic ‘India’ was created during the colonial period. It demonstrates that these descriptors of India as an ‘Aryan’ land, and ‘Sanskritic’ past and ‘Hindu’ nation were created to serve very particular political agenda. While this is outside the scope of this particular book, it begs the question, if modern Indians were to understand how much of their perceived past was constructed by European powers to serve political and imperial agenda, would we be so quick to cling to this mythical past today?