Journey of a Southern Feminist by Dr Devaki Jain

Devaki Jain is Founder and former Director of the Institute of Social Studies Trust New Delhi, India. She was previously a lecturer at the University of Delhi, member of the South Commission (chaired by Julius Nyerere), founding member of Development Alternatives with Women for a New Era (DAWN), and member of the Advisory Council of the intergovernmental NAM (Non-aligned Movement Institute for the Empowerment of Women (NIEW) in Kuala Lumpur. In 2006 Dr Jain was presented by the President of India with the Padma Bhushan Award for exceptional and distinguished service. She has been a member of a number of Indian Government policy committees and has published several books and articles on Indian development and women’s status. Her most recent publication is Women, Development, and the UN: A Sixty-year Quest for Equality and Justice (2005). 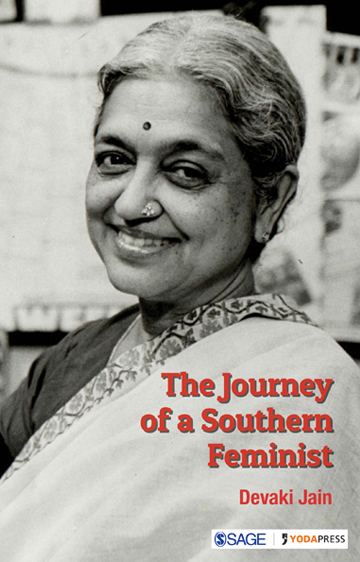 In the last six to seven decades, there have been dramatic changes in the world, not only in the geography of political power but also in terms of the emergence of “voice” from the so far unheard spaces and places. In the case of women, while this emergence may have been bubbling and boiling over the previous several centuries, it came out with something of a bang in the 70s starting with the UN’s First World Conference on Women held in Mexico City in 1975. At Mexico, many of us had revolutions inside us. We were there along with 10,000 women and the idea of “woman” as a constituency emerged. The power and the significance of this identity emerged in our minds and our hearts. Then there was no looking back.

Most of us went back to our countries charged to work closely with ‘women’s issues’ at that time, and now ‘gendered issues’- We tried to identify these special features of gender differentiation , whether they were in oppression or in heroism or in the vanguard of ideas. All these dimensions attracted a whole hoard of women from all across the world.

It was in that current and the fact that just before I was invited to Mexico, I had an opportunity to pull together an edited volume on women, for the Government of India, that triggered my plunge into the women’s movement. This volume was to represent what can be called the status of Indian women, and was India’s offering at the World Conference at Mexico.

Pulling together the essays for that volume and editing, made me aware of something called the ‘woman issue’ or ‘gender issue’ as it is called now. Then the participation at the Mexico UN conference made it into a storm in my head that this is where I need to go.

There was a flurry of activity within government which strengthened and multiplied the activities outside government. Donors from the western countries were generous in supporting both research institutions and activist organisations in developing countries and India was certainly a favourite. This external stimulus with the participation of the government provided meaningful platforms, roads for those of us who were working in the field of understanding and disseminating knowledge on women’s condition in Asia. It also helped to revive institutions, non-governmental organisations which had been dormant.

One such organisation which had been basically set up to study and evaluate the massive employment schemes that the central government was supporting was available to me as it was sort of declining. Since my training was a statistics and mathematics and I had learnt a great deal in pulling the first book, Indian Women, I had put in a proposal to ICSSR through the Institute of Social Studies to enable me to do field work in order to correct the number that was being given for female worker participation rates (all India).

So taking that as the hypothesis, that is that the female participation rate in India was under enumerated, ISST undertook what later became as the first ever time use study in India. That study launched the ISST. There was no looking back, more studies were conceived, many funded by government and government had started setting up advisory committees in every ministry and some of us who were the early birds in women studies happened to be on those committees.

My own tether or ground was research with special focus on showing gender differences especially in the datasets in India. We at the Institute also wrote case studies of women’s work in the less privileged places, in fact in the poverty sheds in India.  We were writing reports on the condition of women workers in development projects in India and simultaneously articulating that difference, and therefore what was to be done in the international spaces.

So ideas that we wanted to pursue were funded. Over the years 1975-1985, ISST undertook many explorations, basically fieldwork, and even enabled the publication of two books, one with case studies where women were the major workers and the other a probe into the errors in data collection and data analysis.

It is this kind of band of women who then provided the field work that led to my knowledge, which in turn gave me the basis for the lectures and papers that I was able to present not only in India but all over the world. Thus I would say that the authors of these three volumes, even though it may be clumsy, could be Devaki Jain and ISST.

Our inclusion in consultations on the many dimensions of women’s quest for equality and justice was a learning experience. The UN had experience on many of these dimensions having worked in other contexts on justice and equality. Funding for all these meetings and consultations came from the better off countries in the North, who interestingly had not only overseas development assistance budgets, but after Mexico they also had a gender officer who was given a budget to enable women from all over the world to get engaged in the road to gender equality. Thus we had subject specific as well as region and sub-region specific consultations. While there is no doubt that this was a thoughtful and perhaps an even generous process, the leadership, even if it was just to facilitate a meeting, was led by what can be called smart “white” young and old women. Their intention, of course, was to enable us, the women of developing countries, to learn, to articulate and to then benefit from the support the UN and the donor agencies were willing to provide for our progress.

However, as we went along the line, many of us, whether it was from Africa, the Caribbean or Asia, found ourselves accepting propositions and programmes that were not what we would have proposed but in some sense, technocracy led, and revealed that the presumption that the Anglo Saxon was smarter, more rational, more technically proficient had not dissolved. It appeared again and again in the various interactions especially those called by the donors, as well as the UN. “We beat the drum, you dance”, seemed to be the message.

Thus my journey into the international spaces where women/gender was being not only renegotiated but programmes and projects and conventions and institutions produced, found me voicing a “no no”.

The response by the women, young and old, of the donor agencies, as can be expected was sympathetic and enabling. “If this is not the way you think it should be, how should it be?” Thus began my journey of characterising the societies and economies of the developing countries, revealing not only that the terminology by which we were being described was erroneous, but also that the projects and priority issues were different from what was being suggested. Defining ourselves and revealing what the definition meant became a strong part of my journey into these international spaces.

This affirmation of difference, south and north was further confirmed and strengthened by participating in the south commission; a commission set up by the NAM countries, to prepare a development design for the regeneration of the former colonies, now the South.

What has been most rewarding and what therefore also reveals the moral sensibilities in the feminist movement is that such voices of criticism and alternate ideas were respected and supported by “sisters” in the North, in the funding agencies. This support is what made it possible for many of us to found South-South networks such as DAWN spell out which would then be presented globally as a voice from the South, legitimate and accepted. Over the decades, much harmony and shared visions have appeared in the international women’s movement. Conversations and dialogues are led not by geography and difference but by a common philosophy, which now is broadly under the umbrella of feminism. Feminism, which has many interpretations and contestations, continues to be the binding term. I have tried to elaborate my view on this in my life and my work. I have suggested that it is a philosophy which stands for justice. It is inclusive and political. In many ways, it defines the goals of the women’s movement, a peaceful and just world, where individuals are respected for whatever they are.