Speaking with the Margin by Dr Debasree De

Debasree De is Assistant Professor, Department of History, Maharaja Srischandra College, University of Calcutta. She has a PhD in history from Jadavpur University. She has many contributions in journals and in edited books. Her special interests are Tribal Studies, Gender Studies, Environmental History, Ancient Indian History, Indology. 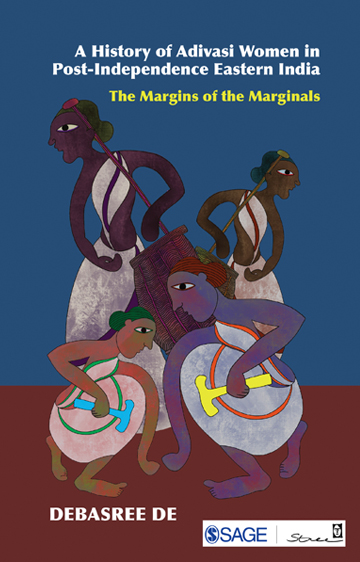 The present book does not attempt to say anything new about the adivasis, rather has tried to remind a forgotten history of the most marginalized section of our society – the adivasi women. There are loads of researches conducted on the tribals and monographs that have been published till date. Therefore, the subject does not offer a completely new theme. The existing perspective on the adivasis among the urban elite is not very rich and this we can easily understand from our own limited knowledge about them. At the same time, it is also very common that the civil society humiliates the adivasi women folk whenever they get the opportunity, and this can be easily understood from the portrayal the adivasi women in literature where it has been claimed that the savages are responsible for the subordination of our motherland. For the civil society, the adivasis are “barbarous”, “primitive”, “uncivilized”, “cannibals”, and so on. They have been consciously secluded from the “civilized” and thus an invisible and impervious boundary has been drawn which can never be crossed. On the other hand, for the adivasis these civilized elites constitute the landlords, moneylenders, bureaucrats, businessmen and agents. But they have always been looked down upon by the dikus (non-adivasis) as a mere body commodity, who can be forced to give unpaid labour, uprooted from their traditional land holdings; who can be lampooned, castigated, lynched and raped or killed without any offence, because they are not even considered as human beings! But it is very well known fact that adivasis and Hindus have always lived together; if adivasis celebrated Durga Puja, then the Hindus participated in Sarhul festival. Then why this segregation, how was this breach created? This history is not unknown as well. After the Santal Rebellion in 1855 the British government pried away the adivasi infested regions from Chotanagpur Plateau and formed a new state called Santal Pargana. That was the beginning of the separation, which was gradually induced into each and every corner of the society, if not politics. The adivasis are made to believe that they are different from the so-called “mainstream society”; their rights would never be respected by the so-called “civilized”. And this is the reason why after seventy years of independence the adivasi regions still lack the basic amenities, such as health care facilities, education, nutrition, potable drinking water, electricity, good roads; why after so many years of development the adivasi culture is disappearing in the darkness of poverty and hunger; why they are facing identity crisis.

If the adivasis are living in this poor condition, then what would be the state of their women folk, who are at the margin of the marginal? There is a prevailing myth that the adivasi women do enjoy a greater autonomy than that of their non-adivasi counterparts. Her sexuality has been promoted in the literature and cinema. But her free sex has always been misconstrued by the “civilized” society. Culture is not static, thus adivasi women’s socio-economic status is also continuously changing day by day, sometimes due to force inflicted by the establishments and sometimes due to her own helplessness. Their subsistence economy is lost under the onslaught of globalization and liberalization. Hunter-gatherers and shifting cultivators are receding at the periphery without even having any alternative livelihood opportunity. Their lives have been serrated by uncertainties. Women bear the major brunt of this economic as well as social risk, and the obvious reason is that the adivasi society is still very much dependent on the forest, and the forest economy is women’s economy. Thus, it evinced that the adivasi women do not enjoy greater autonomy than the non-adivasis. It is often thought that bride-price has given her a unique position in her own society, but then it also leads to certain inhuman practices, like female infanticide among the Khonds of Odisha. There is also a tendency of romanticization of the adivasi women and her sexuality. But the truth that the adivasi society is not romantic lies in the fact that it also practices an inhuman custom of witch-hunting which still is prevalent in the countryside even in this twenty first century.

It is sometimes believed that since the history of the adivasis is unwritten, it is difficult to revisit them. But oral history has made the task easier to record the voice of the adivasi women rather leave them tagging “historyless”. The adivasis have memory, they can remember the past, and they have their own standpoint which can neither be slighted nor denied. It is true that the reconstruction of history on the basis of oral histories and oral traditions is very difficult, but not impossible. Their memories which have been gauged by the state can be well used as valuable source material if cross-checked, as we know that archives or police records may also misrepresent facts or give perverted information.

Another crucial aspect is the history of adivasi development which is not an edifying story. The question may be asked that development for whom or development at whose cost? The state has announced a host of development programmes time and again for the betterment of the adivasis ranging from flagship programmes to mid-day meal. But does the state ever consult the people for whom it is planning? Does the state ever bother to negotiate the adivasis; may it be for taking adivasi land for development or destructing forest for industrialization? What seems more important for the state is to spend millions to tread their movements for democratic rights. Tonnes of grains rot in the government warehouse, but the poor cannot arrange two square meals and has to walk miles to fetch water.

The story does not end here. After losing their customary rights over the common property resources like water, land and forest, the adivasi women are compelled to move to the cities. They are taking jobs in the unorganized sectors like brick kilns, construction sites and are even forced to work as sex workers. They are being subjected to all sorts of exploitation in hands of the contractors, male co-workers and owners, starting from physical, psychological to sexual. They are being trafficked to faraway places for work. Governments neither maintain any records nor are they rescued or rehabilitated, because in the era of internal colonization everything is judged in the parameters of profit. This is the reason why the adivasi society is seen as a depot of cheap labour. Forest rights act (2006) hardly brought them their rights.