Debal K. SinghaRoy, MA, MPhil, PhD, is Professor of Sociology at the Faculty of Sociology, School of Social Sciences, Indira Gandhi National Open University, New Delhi. He is a recipient of the Australian Government Endeavour Fellowship, 2010, at the University of Technology Sydney, Australia, and the Commonwealth Fellowship at The Open University, the United Kingdom (2006–07). Furthermore, he is a fellow with the Alternative Development Studies Programme, Netherlands (2003); a visiting research fellow at the University of Alberta, Canada (2001); and a visiting scholar at the la Maison des Sciences de l’Homme, Paris (1999 and 2007). His academically acclaimed publications include Towards Knowledge Society: New Identities in Emerging India, Peasant Movements in Post-Colonial India: Dynamics of Mobilization and Identity, Social Development and the Empowerment of the Marginalised Groups: Perspectives and Strategies (ed.), Women, New Technology and Development: Changing Nature of Gender Relations in Rural India, Women in Peasant Movements: Tebhaga, Naxalite and After, Social Movements: A Course Guide, Dissenting Voices and Transformative Actions: Social Movements in Globalizing World (ed.), Interrogating Social Development: Global Perspectives and Local Initiatives (ed.) and Surviving Against Odds: Marginalized in a Globalising World (ed.). Professor SinghaRoy has published several research papers in nationally and internationally reputed journals and contributed chapters on ‘Social Movements in India’ and ‘Peasant Movements’ in the Wiley-Blackwell Encyclopedia of Social and Political Movements, 2013. 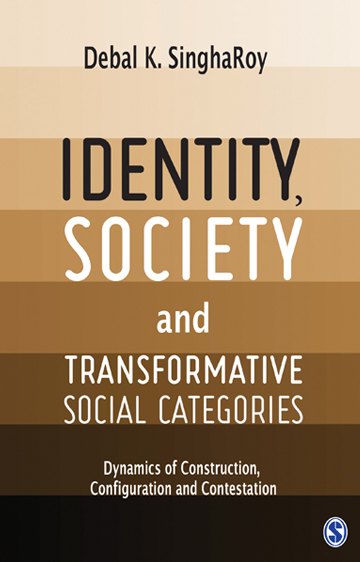 This book elaborates the process of construction of identity and its transformation through articulation of the identities of caste, peasants, class, indigenous people, ethnicity, nationality and citizenship those have intersected on the processes of social movements, colonization, globalization and the emergence of knowledge society.

Identities as the rejuvenated entities of individual and collective distinctiveness coherently govern one’s self perception, form perception about significant others, and function as transformative and change agents of structure entities. They are circumscribed and structured by social, cultural and political arrangements of society and its dynamics of exercise of power and domination that shape the dominant culture. They also develop contestation against domination getting reconfigured and reconstructed. As they do not remain always constant to be historically given and fixed, they undergo   reconstruction and reconfiguration from multiple directions cross-cutting each other’s boundaries and acquire further uniqueness and plasticity. The process of acquiring such uniqueness and plasticity, are culture specific though, has been faster with the interpenetration of modernization, westernization, colonization, globalization, revolution in Information and Communication Technologies (ICTs), emergence of knowledge society, proliferation of social movements and also articulation of resistance of people against varieties domination in society.

As society progresses from traditional to modern and more towards the democratic arrangement people try to create their own space for the construction and configuration of their identities and tend to make choice from available alternatives. However, increasing fuzziness in constructed identities, growing individualism and alienation in public space often make people to accept primordial choice. Though primordial identities are founded on subjective connotation, they also remain to be objectively fixed to suffice to the situation.

Historically construction of identity has taken new turn in the colonized societies with interpenetration of the forces of westernization and colonization.  The colonization however used the western innovations as tool in reconstructing primordial identities in terms of caste, religion and language etc. to convert the local communities into majority or minority, native or the ruling class. Experiences of colonization of indigenous people of Australia show that colonization has brought not only a systematic devaluation of identity of the indigenous people but also destruction to their local culture, enviornment and autonomy. Under the colonial rule they emerged to be dispossessed of their land, and natural resources. Many indigenous people became members of ‘Stolen Generation’ who were forcefully taken away from their parents on birth in the name of integration with the civilized white society. Over the centuries they have emerged to be poor, disempowered, marginalized and oppressed lots in contemporary Australian society and have consolidated their identity as aborigines reclaim their autonomy and to have control over their culture and environment. Though in the wake of recent reconciliatory initiatives by the state and in negotiating with their social development need the identity of the indigenous people has emerged to be multifaceted, they relentlessly endeavour to consolidate their indigenous identity as first citizen of the nation to challenge the domination of the colonizing forces to regain control over their culture, autonomy and environment.

In recent years in the wake of fast emergence of knowledge society, expansion of ICTs, increasing flow of information, images, goods, services, people and objects across the space, the process of formation of identities have got conditioned by strong sense of social de-contextualization on the one hand, and a new sense of belonging on the others. These are reflected in the increasing fuzziness, fragmentation, non-permanence, discontinuity, dispersal, hybridity and fluidity in identity on the one hand and formation of new forms on solidarity on the other. The penetration of knowledge society has been eclectic in India wherein formation of identities has been multiple in terms of widening gaps between the urban and rural, educated and illiterate, digitally rich and digitally poor, high and low castes, affluent and marginalized, and the prevailing gender divide in society. Along the line the pre-given social structure has increasingly become fragmented and de-contextualized. However, new form of contextualization of identity is now taking shape through the consolidation of both the primordial solidarities in the form of caste, religion, language, region, ethnicity etc on the one hand non primordial identities of citizenship, class etc on the other. Significantly, increasing interconnectivity has increased the marginalized people’s access to information, reduced their dependency on the upper strata of the society and have contributed widely to the resurrection and assertion of their identity by consolidating their primordial roots as language of resistance against domination. Pre-existing dominated identities now creates the space for their expression and to have their share of power and re-construction of identities in their own terms.

In the contemporary world most societies encounter complex relationships among the identities of ethnicity, nationality and citizenship in the wake of increasing fluidly in constructed secular identities on the one hand, and consolidation of primordial identities on the other.  While ethnicity pre-existed in all human societies, nationality as imaginary, and emotional bondage for geopolitical, cultural and political unity is a seventeenth century innovation of the West and got expanded to rest of the world. Over the centuries, it has acquired dichotomous manifestations as civic vs. cultural, western vs. nonwestern, secular vs. religious/ethnic etc nationalisms. In Indian context nationalism has become contest category. For Gandhi nationalism was a universal struggle for liberty and justice. Against the backdrop of fragmentation of world and increasing hatred of one nation against the others in the name of income nationalism, Tagore described nationalism an end in itself, an instrument for self-preservation and as a great menace. Though after the anti-colonial struggle in the Indian sub-continent nation states were formed based dominant ethnic formation, neither the Indian freedom fighters nor the founding fathers of Indian constitution were in favors of a dominant religious/ ethnic character of Indian state which is historically founded on ethnic pluralism. For Gandhi, the Father of the Nation ‘Free India will be no Hindu raj, it will be Indian raj based not on the majority of any religious sect or community, but on the representatives of the whole people without distinction of religion’. In fact, the plural foundation of nation-state of India is ingrained with the idea of social and political equality for the citizens that have been proclaimed in the constitution of the country.

However, the ideal of nation-state and citizenship have been introduced in Indian society that has remained traditionally unequal and stratified in terms socio historically acquired caste, class, gender and ethnic hierarchies. Furthermore, despite constitutional proclamation for equality, vest section of Indian citizen still reels under uttered poverty, unemployment, livelihood insecurity, illiteracy, ill-health, lack of skill, knowledge and social mobility, capability and choice. Very often economic and political deprivation of vast sections of citizens have remained linked to their inherited ethnic and primordial status. Feudal domination and its strong primordial and ethnic interface regularly reinforced many of their deprivations, inequality and marginality. Many occasion the formal democratic practices and functioning of the state apparatus show close intertwining with the ethnic consideration as well. Failure of the development initiatives to integrate these people to the path of prosperity and livelihood security often create space for enrooting their association with their primordial identities. Taking advantage of their social and economic vulnerability and their ethnic interface the political entrepreneurs continue to manipulate ethnic identity for a narrow political gain.

Though Indian society has remained culturally and historically rooted in multi religious and multi ethnic fabric it has not experienced the proliferation of hyper and ethnic nationalism in religo-ethnic term as being experienced today. Though India got Independence with the experience of agonizing division of the country, that killed millions, left millions homeless, displaced, India remained founded on the spirit of a plural society and secularism.

India achieved its nation state hood after prolonged struggles against the British in 1947 through the division of the country that created a Muslim Nation state of Pakistan with two constituents West and East Pakistan, and a secular nation state of India. The division of the country and creation of two nations has brought unimaginable miseries for vast sections of population who immediately experienced dark heaps of uncertainty, hopelessness, physical threat, mass exodus, murder, riots burning and destruction of houses and property, gang rape and harassing of women and children. These created enemies out of old friends, ‘we’ and ‘they’ community of refugees and natives, and majority and minority in the name of religion and nationalism. The shifting dynamics of identity and its   intersectionality with ethnicity, nationality and citizenship has been a part of biography of many people in the Indian subcontinent that is founded on everyday tension between secularism on the one hand and primordiality on the other. For many it has remained a life – long experience of shifting description of self from alienhood to   nationhood, from ethnicity to citizenship, from civic to cultural nationalist or the vice versa.  In India many people have the composite lived-in experience of trauma of partition, dislocation, separation, every day humiliation in early part of their lives and the subsequent acquiring of the identity of nationality of his love and citizenship of his choice through a hard-earned process in later part of their lives. Like most Indians they strongly stand for an identity that ensures religious tolerance and cultural pluralism even paying a cost to enjoy the foundation of secular citizenship and constitutional nationality India.