David has been a professional editor and journalist for over thirty years beginning his career on the subs desk of the Morning Star newspaper. He is editor of numerous historical publications under the Socialist History Society imprint. David’s interests and research include Turkey and the Kurds, literary figures like George Orwell, Edward Upward and William Morris, British anarchism, the 17th century English revolutionary era and the history of psychoanalysis. He has contributed towards many different publications and writes review articles, commentaries, opinion pieces, polemics and poetry.

“A map of the world that does not include Utopia is not worth even glancing at, for it leaves out the one country at which humanity is always landing. And when humanity lands there, it looks out, and, seeing a better country, sets sail. Progress is the realisation of Utopias.” – Oscar Wilde, The Soul of Man Under Socialism 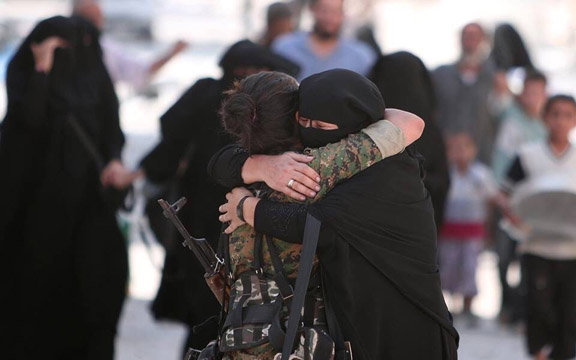 It’s actually surprising that it has been permitted to exist for so long. There are so many forces ranged against it, some publicly and others privately, who would surely like to have seen it strangled at birth or would be content to sit quietly on the side lines as some other brute agency executes the task. That’s exactly what Turkey is now doing in the Afrin province of Syria which has been run by the Kurds since 2014 and is now coming under sustained attack. Kurds are rightly alarmed that Afrin is going to suffer the same fate as Kobane a few years ago; but when the people of Kobane came under assault by ISIS fighters, they resisted valiantly and managed to push back the offensive. In achieving that victory, the embattled Kurds earned the respect of people the world over, inspired a good number of volunteers, both men and women, and it led to them being supplied with weaponry by the United States which realised that Kurds were effective allies in the coalition against ISIS. Now that ISIS has receded from the scene, Turkey’s President Erdogan has been permitted to make a move to eradicate the Kurds in Afrin and aims to undermine their experiment in popular democracy in the wider territory known as Democratic Federation of Northern Syria or more popularly as simply “Rojava”.

Rojava’s existence for more than five years as a de facto autonomous enclave in northern Syria has been an unprecedented experiment in democracy for a region that’s known long periods of dictatorship and unimaginable tyranny. The Kurds, along with local Arabs, Assyrians and Turkmen and led by the Democratic Union Party (PYD), have been gradually building a new society on a cooperative and democratic basis which has been a remarkable endeavour  amidst all the turmoil and conflict that has been taking place around them. All the while, Turkey has been seething and waiting for the right opportunity to attack. Now Ankara has seized the moment and has unleashed its military might with a merciless determination. The Turks have threatened to continue until “every terrorist” is eliminated from the entire Rojava region and they plan to push on to other areas of Rojava after Afrin is defeated including Kobane.

If Turkey is allowed to succeed it would be a tragedy for the Kurds and mark a huge setback for the liberation of women in particular because women have been granted equal rights with men under the new administration. All the different ethnic communities are represented in the running of the Rojava territory and have been working amicably together, according to all reports. Visitors have been impressed by how efficiently the region is run and the air of freedom that the people breathe is infectious. The existence of a radical democratic alternative society to the oppressive neighbouring regimes is a strong symbol of hope to many that “another world is possible” and many anarchists and other progressives have flocked to Rojava. Equally, its existence stands as a threat to many vested interests, not least of which are the current regional rulers and those who control the levers of power everywhere. Greater equality and fairness are not what any of the global powers bargained for when they threw their support behind the uprising against Damascus seven years ago. Rojava may be Utopia to many, but that doesn’t mean it should be dismissed too lightly as an impractical exercise in idealism.  Even hard-nosed realists must have some sympathy with their fate. In fact even those who pride themselves on being unpolitical would be impressed by the resilience and bravery of the men and women of Rojava. Their experiment in popular democracy is a pointer to the future. It has already succeeded in planting the seeds of change and its destruction would be a tremendous loss, but it is too early to predict that as a final outcome. All that can be said with any certainty is that its very existence has been quite remarkable and that alone is sufficient to inspire generations to come to struggle on until the promise of true freedom is achieved. It represents a necessary Utopia.

The following dramatic monologue is a piece of pure fiction that imagines the possible thoughts of an entirely non-political young person of the Me-Generation living in the UK but he/she could be anywhere in the West who is reacting to the news of Turkey’s latest onslaught on Afrin.

“It’s utopian, the work of fantasy, an idle dream of misguided youth and the embittered few in their dotage who never learnt how the world works. You can make it if you try or if you know how to play the game: keep your head down, keep your nose clean, say the right thing, show you are eager to please, fit in, keep your principles held closely to your chest; give to a charity if your conscience is irking you, if you really feel the need to. It’s cynicism that keeps us sane, our blasé culture demands it. If we conform then the world is our oyster. There is true equality of opportunity, but, let’s be realistic, only the fortunate few can reach the heights and dwell in the happy valley of the jet set, those ever smiling celebrities and their constant relentless partying. The world is really their personal stage and they play their parts exceptionally well, having fun on our behalf. Kim, Kylie, Khloe, Kendal, Cara; we live our own lives through them. That’s how it is and how it has always been. We are obsessed with our reality TV stars, our football heroes, favourite pop stars, soap stars, glamour models on the cat-walk, all those charming boys and girls; you can even have a selfie taken with them. They are the beautiful people; the blessed, they are kissed by the gods. What’s not to like about them? Well I know they get paid an awfully lot of money, for simply kicking a ball around a field or strutting their stuff in someone else’s clothes, but they deserve every penny. They make so many people happy, just like our old dear Queen, who does so much for the country. We don’t begrudge her living in a palace and serving her pet dogs prime cut steaks, far better quality fare than what is doled out to her servants.

“The highlight of your life is to canoodle with a celebrity. We are thrilled by news of all their exploits and we chuckle in contentment, evidence of our very little resentment as they continue to fleece us, as statistics on the wealth gap prove only too well. We prefer to ignore that shocking data: it’s far too boring, and what can we really do about changing it? Are you quite insane? Socialism was a fine experiment but it failed long ago. It’s dead history. We were taught that at school; anyway, it’s there to see in The Sun and don’t you read the Mail Online? The Gulag is the inevitable result of socialism. You shouldn’t tamper with the natural order of things. And if the poor won’t work, let them starve. There’s no such thing as a free lunch. Well, I’ve never had one. But you can try the lottery if you want a quick route out of drudgery. Someone’s got to be the lucky one. There’s a winner every week. It might be you – or me. If you don’t play you will never know.  You know it makes sense. But all this talk of socialism is for losers. Those who have no chance of making it in the real world; this fantasy is all they have to fall back on. It’s terrible that politicians who should know better can get away with making false promises and offering people a solution that has no chance of working. The way they take us for mugs is totally criminal. I suppose that’s the price we have to pay for free speech and living in a democracy. We have to be tolerant and let them have their say; we are not a tyranny after all.

“The Utopian dreamers want to build a new society, one that’s fair for all, with equal rights for women, no discrimination and no favours for the privileged few. Eliminate corruption from all government offices so that our esteemed representatives become true tribunes of the people and are not simply feathering their own nests. Well, they are just p——- in the wind, aren’t they? Surely you agree? They don’t stand a chance of success. Look at the odds stacked against them? It’s a never-never land. All those menacing neighbours with their weapons waiting to pounce; the big boys pull all the strings in the media to make them sing the tune they want us all to hear. There’s just a handful of idealists who cannot even handle a gun and would be much more effective staying at home and writing poetry or blogging at night to their hearts content; that way they do no harm to themselves or to anyone else. Anyway idealism is the cause of so much damage and distress. It gives people false hope, that leads people astray and that’s dangerous.

“Just take a long look at that region. It’s dominated by evil tyrants who eat babies and rape their own daughters, they marry girls at 11 or 12, and add to that all the domestic violence, the FGM, it’s all too ugly to even think about; and these are the ones who are supposed to be our friends and allies. Feminism in that region of the world is impossible; it’s a “s—hole”, to borrow a phrase. Come on, they really are dreaming. It’s terribly sad that they are getting crushed and everything though, heartrending to see mothers wailing as they cradle their dead babies covered in blood and dust; people killed for simply dreaming of a better life. Yeah, that’s not fair and I do feel for them a lot. But what can I do about it?

“Far better to have been reading Machiavelli than Thomas More; I’m sure that’s what my old teacher would have told us. If you upset the apple cart only dreadful consequences follow; you have to be prepared to pay a very, very high price. Most ordinary folk are too cowardly for that, aren’t they, well aren’t they?”

Do Not Let Afrin Become Another Kobane