Suneetha Rani is Professor, Centre for Women’s Studies, University of Hyderabad. Her areas of interest are Cultural Studies, New Literatures in English, Translation Studies and Dalit  Studies. Among her many publications are: Australian Aboriginal Women’s Autobiographies: A Critical Study (2007); Dweeparagalu, an anthology of Sri Lankan women’s short fiction translated from English to Telugu (2008); Flowering from the Soil: Dalit Women’s Writing from Telugu (2012). 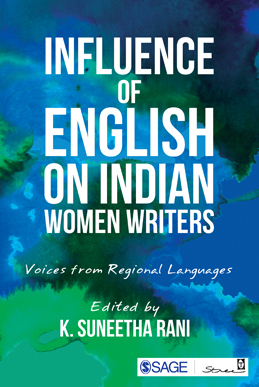 The interface between English and the Indian languages has been a subject of significant debates in Indian languages. The Indian languages have been simultaneously arguing against the hegemony of English as well as that of the “standardized” Indian languages. Both have and continue to restrict and alienate some sections based on the factors such as caste, gender, religion, region, etc. It has been observed that the beginnings of the English discourse in India in the late 19th and 20th centuries were built majorly around the category of gender. While English as a language, legacy, culture, writing, and identity was utilized to mould better family women by reiterating traditional gender stereotypes in the guise of modernity, women looked upon English as a means of understanding, accepting and creating new avenues of learning, liberation, and livelihood. English contributed to the construction of dichotomies but at the same time facilitated the de-construction of given biased dichotomies by women and other marginalised sections of the Indian society. English represented colonial modernity in pre-independence India but, in the post-independence India, it is transformed into a promise of achievement and upward mobility by those who were secluded, deprived and subjugated for ages.

Women have engaged in this debate at multiple levels as it was closely connected to their mobility, geographical as well as cultural. Women’s education and women’s education in English were major questions in the reform agenda in 19th century India. Women writers dealt with the intricate questions of caste, gender, and religion against the backdrop of the English discourse. The book Influence of English on Indian Women Writers: Voices from Regional Languages is a collection of twelve articles that analyse the debates around English as understood and discussed by women writers in Indian languages as well as in English. Regional languages have extensively been becoming vibrant platforms for the discourse of English in close associations with the questions of tradition, modernity, colonialism, nation and particularly gender.

The essays in this volume focus on women’s voices in the Indian languages, including English, to analyse the complex associations between gender and language. They closely examine identities and specificities of the writers and the contexts without essentialising the categories of women, writing, Indian, languages, and English. The parallel movements and contexts that directly and indirectly influenced and worked together on women’s issues are also analysed. The essays attempt to unveil the politics behind the homogenizing arguments for saving of languages as marks of the lost, dominant, glorious culture. Some of them discuss how English education was considered a mark of modernity and thus an opponent to tradition and patriotism while some others analyse the conflict that women had to encounter to access English education and to write in English. Most of the essays discuss the English debate as centred around domesticity of women and extend their analysis to the fundamental questions such as writing women and their choice of language especially in the context of identity movements. The essays have chosen specific locations such as ideological, geographical, cultural, linguistic, only to name a few, to speak from and to speak about.

Vijayasree’s article “Language, Reform, and Nationalism: Indian Women’s Writing in the Nineteenth Century” probes the subtexts in women’s writing and examines the interventions made by women writers into the dominant discourses of the nineteenth century. It argues that the intersecting sites of English education, the rhetoric of reform and nationalist discourse provided a larger context within which the literary production of Indian women writers took shape in the nineteenth century. Alladi Uma’s article “Women and ‘Reform'” introduces the woman question regarding reform and nautch question in 19th century focusing on the late 19th century and early 20th century. The author chooses three women writers who wrote in English, Tamil, and Telugu to address the questions of education and reform or education as reform that became the underlying ideology of women’s reform. This article discusses education and movement from private to public as modernity and also raises questions about patriarchal modernity.

Sanjukta Dasgupta’s article “Colonized: The Bengali Woman Writer in British India” focuses on the anxieties of authorship and the career graph of the writers Rokeya Hosain and Swarnakumari Devi among others. It compares the women writers in Britain and in British India in the early 20th century regarding their demand for gender equality and observes that English education was looked upon as de-nationalising for women by some nationalists who said that they were not against women’s education but were against colonial education.  Somdatta Bhattacharya’s article “Rokeya’s Dream: Feminist Interventions and Utopias” locates Rokeya Hossain in the larger context of women’s education in colonial Bengal and India in the 1900s. Having encountered the conflict between Bengali and Urdu, Hossain found a means and a medium in English to achieve her aim to run her educational institution successfully. This article points out that Hossain’s “Sultana’s Dream” and Padmarag depict women as agents of change, but also argues that Hossain’s choice of utopias to portray the reversal of gender roles and education raises questions about the fulfillment of such hopes.

Meera Kosambi’s article “Women’s Literature and Colonial Modernity: Two Marathi Novelists, Kashibai Kanitkar and Indirabai Sahasrabuddhe” argues that reform in the nineteenth-century in western India was a direct result of English education and was a male project with women presented as passive recipients of benefits of the reform movement. But, there were women whose writings launched a parallel discourse and who took charge of the movement gradually. While some carried the male, mainstream, Hindu, upper caste agendas forward, some others paved a different way for themselves, questioning the patterns associated with genders, such as caste, class, religion, language, region and political affiliations. Omprakash Kamble’s article “Mukta Salve: The early emergence of a protest voice in Mid-nineteenth-century Maharashtra” continues the discussion on the discourse of women and English in Marathi by focusing on Mukta Salve’s essay titled “Mang Maharanchya Dukkha Wishayi Nibandh” published in 1855 that discusses the pain and suffering of Dalits. It argues that the English education opened up a space and an opportunity especially for the people of the marginalized sections who embraced English education as a means of emancipation and subversion of hierarchy and discrimination.

Paromita Bose in her article “Writing Self: Writing for Others” takes forward the discussion of reform as visualized and carried out by the women writers in their writings by choosing to discuss personal histories, identity politics and their close connection with women’s movements. Jinju’s article “Reconfiguring Boundaries: Education, Modernity, and Conjugality in Lalithambika Antharjanam’s Agnisakshi and Zeenuth Futehally’s Zohra” shifts the focus of this anthology from late 19th and early 20th centuries to the second part of 20th century choosing two novels from different contexts and regions and languages as its major focus. Similarly, it combines the issues of English education and writing.

Nikhila H, in her article “Securing Pass Marks: Education for Women in the Early Modern Kannada Novel” focuses on the changing meanings of education, especially women’s education, and educated women, in the Kannada context during the 20th century. The article chooses four early novels in Kannada to map the changing debates and connotations of education and modernity. Sowmya Dechamma in her article “Women and English Education in Coorg/Kodagu: A Discussion of Alternate Modernities during 1834-1882” discusses how Coorgs/Kodavas as a community volunteered to educate their children, especially daughters. It also debates how modernities are understood and adopted differently by different communities. It would be interesting to juxtapose this situation where a community/a culture/ a nation like Kodagu looked upon English education as means of building a nation for themselves while the Indian nation was looking upon English education as anti-national.

Yogitha Shetty’s article “Nation, Ideal Womanhood and English Education: Revisiting the first Tulu novel Sati Kamale”, centred around the first Tulu novel Sati Kamale by S.U. Paniyadi, argues how there were divided voices and opinions in Tulunadu about English as a tool of forced colonial modernity. The novel criticises the colonial modernity brought in the form of English education presenting a binary of man (husband)/woman (wife) who fight the battle against the colonial modernity outside in the world and at home respectively.

Jasbir Jain’s article “Between Language and Parole: the Forked Road to Development” touches upon language in the context of education, pedagogy and culture. While it endorses the multiple ways in which language is used, it also states that any language has a divided access to people or that there is a divide among people who access language. This article debates issues ranging from classroom to globalization with a focus on English and emphatically states that language plays a major role in identity politics and nation-building.