Bheemaiah Krishnan Ravi is Professor in the Department of Communication, Bangalore University, Karnataka, India. He has 28 years of teaching and research experience. He has written in several international research journals and has published five books. Professor Ravi specializes in the following subject areas: Indian media industry, development communication, political communication and film studies. He has several television programmes and radio productions to his credit. During 2002–2006, he was a member of the Karnataka State Commission for Backward Classes. Before he started his academic career, he spent a decade as a journalist. Presently he is serving as the Registrar of Bangalore University. 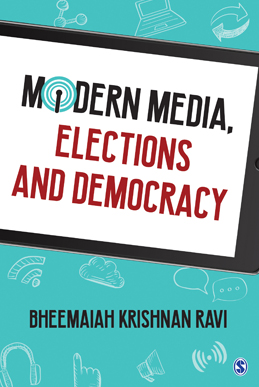 Modern media, elections and democracy authored by Bheemaiah Krishnan Ravi, is an essential read for academicians, students, media practitioners as well as policy makers. This book provides an in-depth and critical analysis of media and election dichotomy. The role played by media vis-à-vis various democratic institutions are discussed. Case studies pertaining to media practices during elections and regulatory mechanisms followed by various governments are evaluated.

It should be noted here that despite the iron fists of repressive regimes, there have been many instances of media activism and investigative reporting which have paved the way for the ouster of such governments. Instances from the peoples’ use of social media in the Arab world has given the modern media a fillip as it has ushered in a truly democratic “Arab spring” to unleash a new era in those parts of the world. Many such inspirational instances can be found in the book. The ethical practices of journalists, media houses and electoral commissions are discussed in length.

Media role as the as the Fourth Estate and as a platform of public opinion has been recognized all over the world. It has always been regarded as a critical element in public sphere in a democratic system. But of late media has undergone a sea change due to various factors. The author recognizes about the rapidly changing nature, scale, reach and the ownership of media across the world. Media have been influential and inspirational at times, at times catalytic and at times biased as well. The author carefully knit together stories of all such tendencies of the media from the perspectives of the stakeholders who matter in the society.

Critics have criticized media for having taken the downward spiral. Independent thinkers like Noam Chomsky have spoken extensively about the ‘manufactured contents’ produced by the media. With the onset of global media conglomerates, media have tended to be pro establishment in nature. Profiteering and aggressive commercialization has led to the deteriorating standards of the media. On the one hand media has benefited immensely by the advances made in information and communication technologies, but on the other hand these technological advances have also created many challenges. Such critical and objective writing makes the book compelling to read. In fact, these aspects extend the scope of the book beyond pure academics and into the realms of public sphere.

The chapters pertaining to media role in democracy, media and society provide the broader framework in which the media operate. Electoral system is an important aspect of any working democracy and election commission is a constitutional institution essential to make the democracy work. So, effectively, it is the election system which implements and also acts as a guardian of democratic principles on the ground.

The media play an important role in an election, not only as a means of examining government actions, but also making it sure that the voters have all the necessary information at its disposal to make an informed and democratic choice. Governments have vital obligation not to impede the media in performing these functions. It is necessary to understand that the role of media is not just limited to acting as a platform for expression in a limited sense. The media are far more important in terms of enabling the public to exercise their right to freedom of information as well. This right is closely related to media pluralism, because without such a guarantee the public cannot access a diversity of information. The book discusses these issues in length in the media and election chapter.

When it comes to the performance part of the media, editorial independence, and professional integrity are the cornerstones of sound election coverage. A lack of journalistic autonomy or responsibility can, in combination with an unbearably huge media landscape, affect the results of elections. Therefore it is imperative to have media diversity in terms of presence and reach. This is an important topic covered by the media. The chapter on the role of media in the coverage of political campaigns is very interesting as it is full of anecdotes and political slogans from the battlefields of elections from various parts of the world.

There is a separate chapter on role of television in democracy which has some interesting stories from the experiments carried out in US and India. Modern elections were fought on television as well as on the streets. The television debates and discussions are essential practices running up to the elections and after. The book doesn’t miss out on this important medium. It is essential to understand the legal provisions pertaining to governmental practices vis-à-vis mass media organizations and journalistic practices.

Along with plenty of international laws and treaties most of the countries have their own national legislations, which provide guidance and parameters for media activity and respective regulatory bodies. The book throws light on such legal framework as well. One of the most important features of this book is that an entire chapter is dedicated to the discussion on media and electoral practices in India. This is of great help for those who are interested in understanding the nexus of media and election in India democracy. Ethical aspects of electoral coverage from the perspective of media as well as the public are discussed in the book.

Modern elections are fought mainly on the media platforms like print, electronic and social media than on the street. The television debates, trending topics on twitter, net savvy image of candidates are swinging electoral fortunes of political parties. Defying expectations of opinion polls, modern media, especially social media have managed to bring in a new era in political communication, making it an integral part of political establishments. The erstwhile colorful street campaigns have now been complimented with television and social media campaigns as well. This trend has thrown up several challenges to the various stake holders of electoral democracy. This book makes a humble attempt to understand such emerging phenomena.