Margi Prideaux an international wildlife policy writer, negotiator and academic, with a PhD in wildlife policy and law. She has worked within the conservation movement for 28 years, writing to inform policy audiences in more than 20 different international conservation processes. Her recent books Global Environmental Governance, Civil Society and Wildlife and Birdsong After the Storm speak to the need for local community participation at the international governance table to secure what is precious in the face of an unprecedented ‘storm’ of environmental and political change facing the world. Two new books, Shock and Awe: The global assault on wildlife and where to find hope, co-authored with Donna Mulvenna, and Wild Tapestry: Weaving Wildlife Survival, will be released in 2018.  Her articles are published on openDemocracy, Global Policy, AlterNet, Zoomorphic and Ecologist and a number of academic journals. As well as writing, Margi divides her time and affiliation as the Policy and Negotiations Director with Wild Migration, and as a Research Associate with the Indo-Pacific Governance Research Centre. Find more about Margi’s work and her writing at www.wildpolitics.co 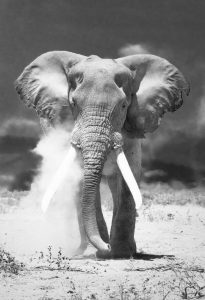 There is something depraved about those words. They carry with them the whiff of death. Of actions without morality.

For thousands of years, the tusks and other bones of mammoth, hippopotamus, walrus, narwhal and elephants have been carved and used as objects of reverence, always after the grateful community had consumed the animal. It flesh gave life to the community and in return the objects they made with the animal’s remain spoke of connection and respect.

It was the European and Asian aristocrats that made a diabolical art form of killing for bones to create debased objects, designed to increase individual social standing.

Colonial ivory hunters wiped out elephants in North and much of South Africa before the close of the 19th century. Their wake of destruction flowed across much of West Africa one hundred years later. African slaves were used to carry tusks destined to become piano keys, billiard balls and other degenerate expressions of colonial wealth. At the peak of the ivory trade around 1,000 tonnes of ivory was sent to Europe alone. By the 1970s, Japan was consuming 40 per cent of elephant ivory.  Europe and North America accounted for another 40 per cent, often worked through Hong Kong as the largest trade hub.

As African elephant numbers plummeted again in the 1980s, ivory traders claimed that the problem was habitat loss, not hunting for bones. In this fateful decade, 75,000 African elephants were killed for their tusks each year–a haul worth around 1 billion dollars. Most of this came from illegal hunts, fuelling corruption and the breakdown of law and order in areas where the illegal trade flourished.

In 1986 and 1987, the Convention on International Trade in Endangered Species (CITES) registered stockpiles of 89.5 tonnes of ivory in Burundi and 297 tonnes Singapore–two countries with no elephants of their own. The Environmental Investigation Agency, a small, brave conservation organisation, uncovered that international criminals owned the stockpiles.

Tanzania, attempting to break down the ivory syndicates that it recognised were corrupting its society, proposed a total international ban on African elephant ivory. Some southern African countries including South Africa and Zimbabwe were vehemently opposed. Supported by Hong Kong and Japanese ivory traders, seeking to maintain trade, they claimed they ‘managed’ their elephant populations well, and they wanted revenue from ivory sales to fund conservation.

Despite South Africa and Zimbabwe’s efforts, and after heated debate, international trade in ivory from African elephants was banned. The poaching epidemic that had hit so much of the African elephants’ range was gutted. For a time. Ivory prices plummeted, and ivory markets around the world closed, almost all of which were in Europe and the USA.

But trading in bones is selling your soul to the devil. Once the deal is done, there is no going back.

It was only a matter of time before the criminal market scaled up its volume again. Now, ivory trade is as rife as before. It’s just moved onto the black market. Now this trade feeds demand and once again bankrolls elephants’ destruction. One time legal international ivory sales that were negotiated in 1999 and 2008 to remove stockpiles of ivory have just provided an avenue for criminals to launder illegal ivory into the legal market.

Africa is thought to have lost at least 60 percent of its elephants in the past decade alone.

Theft of stockpiles bones is also on the rise. In 2014, Uganda began investigating the theft of 3,000 pounds of ivory from the vaults of its state-run wildlife protection agency. Recognising while piles of ivory exist the problem will continue, some key countries have started burning all or a portion of their stockpiles.

The debate is often depicted as Africa versus the West, even now. It’s not so. South Africa and Zimbabwe have always walked a different path than the rest of the continent. In 2006, in an attempt to convince South Africa and Zimbabwe to join the continent, 19 African countries signed the Accra Declaration calling for a total ivory trade ban. The following year, 20 African countries called for a 20-year moratorium. Most of these countries know that trading in bones brings bad karma to their land.

International ivory trade has always been about imperialism and international power. It was described by Joseph Conrad as “the vilest scramble for loot that ever disfigured the history of human conscience.”

In 2015 the largest ever continent-wide wildlife survey was conducted, carried out by spotters in low-flying planes counting elephants below. They found that 18 African countries had lost 144,000 elephants in less than a decade. Forest elephants, which live in central and West Africa, were excluded from the census because they’re nearly impossible to spot from the air. But ground studies suggest these elephants are almost gone as well. In northern Cameroon, survey teams made a shocking discovery. They could only find 148 elephants—along with many carcasses—revealing a tiny regional population of forest elephants in immediate danger of extinction. The countries with the greatest declines of savannah dwelling elephants were Tanzania and Mozambique, with a combined loss of 73,000 elephants to poaching in just five years.

Carrington, D. 2016, African elephants ‘killed faster than they are being born, The Guardian, https://www.theguardian.com/environment/2016/mar/03/african-elephants-killed-faster-than-they-are-being-born

Hanson, M., 2017,  Why would Theresa May ditch a pledge to ban ivory trading?, The Guardian https://www.theguardian.com/lifeandstyle/2017/may/22/why-would-theresa-may-ditch-pledge-ban-ivory-trading

McCarthy, M. 2008. Return of the Ivory Trade, The Independent, https://www.independent.co.uk/environment/nature/return-of-the-ivory-trade-865797.html

Milner-Gulland, E.J. and Mace, R., 1991. The impact of the ivory trade on the African elephant Loxodonta africana population as assessed by data from the trade. Biological Conservation, 55(2), pp.215-229.

Zhang, L., 2015. China must act decisively to eradicate the ivory trade: the continued existence of large stockpiles of legal raw ivory in the country is hampering China’s promises to save the elephant. Nature, 527(7577), pp.135-136.