The two drops of oil by Paulo Coelho

Sometimes the Warrior of Light has the impression that he is living two lives at the same time.

In one of them he is obliged to do everything he does not want to, fight for ideas that he does not believe in.  But there is another life, which he discovers in his dreams, his reading, and meeting people who think like he does.

However, if he is more attentive, he will realize that his life is just one: all he needs to do is let his dreams take care of his daily life and the discipline of his steps will help him to achieve what he dreams of.  Because we all need to learn how to balance Rigor and Compassion, as this old legend teaches us:

A certain merchant sent his son to learn the Secret of Happiness from the wisest of men.  The boy wandered for forty days in the desert until he reached a beautiful castle on the top of a mountain: there lived the wise man that the boy was looking for.

Instead of finding a holy man, however, our hero entered a room full of people, with a lot of activity going on all at the same time: merchants coming and going, people talking in the corners, a small orchestra playing soft melodies, and there was also a table loaded with the most delicious food of that region of the world.

The wise man conversed with everybody, and the boy had to wait two hours until it was his turn to be attended.

The wise man listened carefully to the reason for the young man’s visit, but said that at that moment he did not have the time to explain to him the Secret of Happiness.  He suggested that he go for a stroll around the palace and come back in two hours.

“But I want to ask you a favor,” said the wise man, handing the boy a teaspoon into which he poured two drops of oil.

“While you are walking around, carry this spoon without letting the oil spill.”

The boy began to go up and down the stairs of the palace, keeping his eyes glued on the spoon.  At the end of two hours he returned to the wise man.

“So,” asked the wise man, “did you see the Persian tapestries in my dining room?  Did you see the garden that the Master of Gardeners took ten years to create?  Did you notice the beautiful parchments in my library?”

Ashamed, the boy confessed that he had seen nothing: his only concern was not to spill the drops of oil that the wise man had entrusted to him.

“Well, then, go back and look at the wonders of my world,” said the wise man.  “You can’t trust a man if you don’t know his house.”

Now calmer, the boy took the spoon and strolled around the palace once more, this time noticing all the works of art hanging from the ceiling and walls.

He saw the garden of the Master of Gardeners combining with the mountains on the horizon.  He smelled the perfume of each flower.  He admired the parchments of scared texts created by men with patience and devotion.  He noticed that although the wise man possessed a great many works of art, he managed to distribute them all with such perfect balance throughout the house that visitors could give attention to each one of them.

Going back to the wise man, he reported on everything he had seen.

And the wise man asked:

“But where are the two drops of oil I entrusted you with?”

Terrified, the boy looked at the spoon and realized he had spilled the drops.

“Don’t you worry,” said the wise man.  “You came here in quest of some advice, and all I have to tell you is this: the secret of happiness lies in looking at all the marvels of the world and never forgetting the two drops of oil in the spoon.” 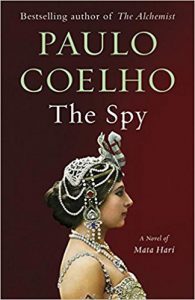 The Spy, the lastest novel by Paulo Coelho

Paulo Coelho (Portuguese: [ˈpawlu kuˈeʎu]), born August 24, 1947) is considered one of the most influential authors of our times. He is most widely read and his books have sold more than 195 million copies worldwide, have been released in 170 countries and been translated into 80 languages.

He was born in Rio de Janeiro in 1947 and discovered early his vocation for writing. He worked as a director, theater actor, composer and journalist. His collaboration with Brazilian composer and singer Raul Seixas gave some of the greatest classic rock songs in Brazil. He has received numerous prestigious international awards amongst them the Crystal Award by the World Economic Forum. He has been a member of the Academy of Letters of Brazil since 2002, and in 2007 he was proclaimed Messenger of Peace by the United Nations. Paulo is the writer with the highest number of social media followers and is the all-time bestselling Portuguese language author.