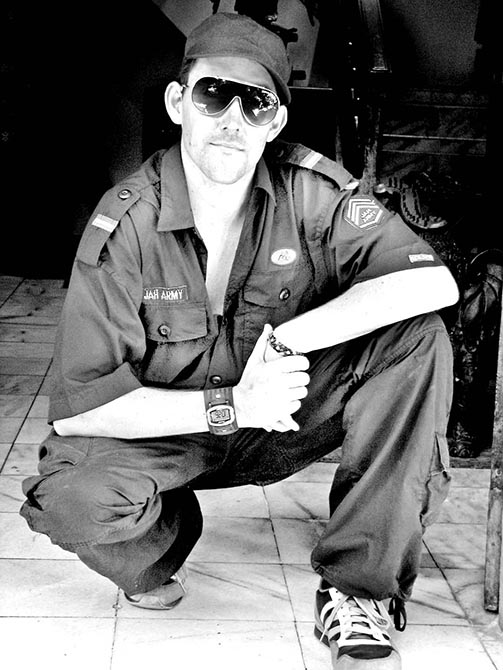 Morganics is an award winning Hip Hop Artist, spoken word performer and director as well as a passionate community worker. He has performed from New York to the UK, the Sydney Opera House to Prague. His extensive work with indigenous communities throughout Australia includes The Wilcannia Mob’s “Down River” which he remixed for MIA’s latest. He produced an album for ex street kids Wayahudi Family in Tanzania and has recently released his CD/DVD “Hip Hop is My Passport”. Morganics is currently working on his forthcoming book “Memoirs of a Hip Hop Nomad” and Australia’s first Hip Hop musical feature film “Survival Tactics”. www.morganics.info

Exclusively for readers of Live Encounters an excerpt from Morganics upcoming book, Memoirs of a Hip Hop Nomad. In this chapter he shares with us details of a brief ‘stop over’ in Manila!

I wake up in Docker River (Kaltakatjarra), Australia’s most isolated Aboriginal community at the south west of the Northern Territory, near the South Australian and West Australian borders. There are 800 people in the community and at 5am as the sunrises over this huge Namatjira landscape, no one is stirring.

It’s the end of three weeks of workshops and we pile into the troopy – the 4WD. We hit the red dirt road and start bumping our way north, it’s about four hours drive to Yularra, the airport. About fifteen minutes into our journey we spot a couple of camels on the road up ahead loping along. They turn their goofy heads and look at us as if to say, “Oh shit! A car!” and keep running along the road. We laugh. They keep running along the road.

We are doing about eight kilometres an hour now and it’s a fair drive so we beep our horn and try to wave them off the road. Not known for their incredible brain capacity – water is another thing – they just keep running along the road, trying to get away from us. So for the next ten minutes we trundle along behind them laughing as they try to figure out what is going on until one of them has a brain surge and steps off the road. We yell in triumph, the other camel takes the cue and they run off into the vast horizon looking back at us as if to say, “What is their problem?”

I get the four hour plane to Sydney, get home, shower, wash the desert dirt off me, have a feed and head to my night club gig at the bottom of a huge shopping mall in inner city Glebe. My job is to MC, i.e. crowd hype, at a Hip Hop R’n’B club. I knew it was going to be pretty commercial, I tell myself it’s good to reach out to a different audience, keep an open mind and help pay for my upcoming trip while you’re at it. Strange how these things work, the poster for the event is of an oiled up, muscular guy and a sexy, scantily clad woman, both African American. The poster says “Hip Hop and R’n’B” and somehow that translates into a double levelled club of 1,000 people with the English bar men, the Lebanese security guys and me being the only ones who aren’t Indonesian, Vietnamese or Filipino. The crowd is cool though, they don’t really want to hear me rap obviously cause I don’t fit the stereotype, and I’m not famous, so I hype the crowd, occasionally.

The DJ’s rotate, I am on for five hours, and each DJ seems to play the same set of songs in a different, and sometimes even in the same, order. It gets a little boring, my jetlag is starting to kick in and when I hear Ice Cube’s “Get Your Back Into It” for the fifth time at 4am, I tell the promoter that I think I should let the DJ take over now, collect my cash and go home. No sleep, it’s a 6 a.m. check in, I grab my stuff and head to the airport for my flight to San Francisco. As soon as the plane takes off, I start snoring.

At Manila airport we are told to wait…and wait…and wait. They tell us that the plane has a “mechanical fault” and that they wont know if it can continue onto San Fran for another three hours. So I grab my backpack and take off to check out Manila on foot, in three hours. It’s about 7 p.m. and I walk out of the airport and into your normal South East Asian big city mix of heat, humidity, pollution, noise and colour.

Sweating with my backpack on I just walk straight ahead and see what I can find. Being right beside the airport I quickly figure out that this isn’t Bel Air. As the streets start to get smaller and darker I realise I am walking through slums. I see six people on three bunk beds, cardboard, wood and sheets.

I am obviously not a local and people are really friendly if a little surprised. Kids run along the street waving at me, old ladies smile. A group of young guys with a guitar stop me and ask where I am from.

“And what are you doing here?”

“Our plane is broken down, so I have to wait.” I am feeling a little footloose so I ask if they can play a song.

“Maybe I can beatbox?” I suggest

“Beatbox?” lost in translation they smile “OK” and they laugh amongst themselves and as the guitarist strikes up a riff, I …..beatbox. They jump around dancing as their lead singer starts singing what sounds like a Phillo pop song. They all join in and at the breakdown I bust a freestyle rapping about the clothes they are wearing, the bananas being sold right beside us, responding to the environment. It transcends translation, even if their English is limited and my Tagalog is non-existent, they understand what I am doing and start holding out different objects, keys, a wallet, a mobile phone that I can rap about. Then their chorus kicks back in and they all sing along, I add some vocal scratches and the jam is finished.

We shake hands, pat each other on the back, the old lady at the stall beside us gives me a banana, and we bid each other goodbye as I walk deeper into the slums, smiling.

One thing I have definitely found with my travels is that whatever energy you put out, locals pick up on it really quick. Put out fear and people will feel uncomfortable around you, the energy will get antagonistic.

A gay friend of mine told me that when he was walking home one night in Sydney he noticed a bunch of young guys had started walking behind him. He quickly adjusted his walking style so that he looked as if he was a bit drunk, and voila! The young guys lost interest and walked away.

Tonight in the slums of Manila I was on a bit of a high, soaking up a bonus voyage into a dizzying array of alleys and smells, sights and sounds and I’m pretty sure the vibe I was putting out was so good that it didn’t matter that this was definitely not on the tourist map.

I came across a CD stall in an alley and got into a half hour discussion with the owner about Hip Hop in the Philippines. We compared stories I had been told by my Philo-American friend Roland of the first wave of breaking turning Manila into a thriving mass of sensationally talented Bboy crews back in the early 80’s. The CD seller showed me some local stuff that looked pretty commercial, but compared to Australia at least there were some local Hip Hop crews that he knew the names of. I bought a couple out of curiosity, he got me to beatbox for him and I carried on.

One slightly dodgy looking dude followed me for a few blocks, asking all the normal questions until he finally came to the point.
“Do you want to fire a gun?”

“Do you want to fire a gun? We can go somewhere you can fire a handgun?”

Being in a particularly good mood, firing a gun was the last thing on my mind at the time, and a little taken aback I said…

“Thanks for the offer, but I’m cool thanks”

“We can shoot a cow with a machine gun,” he offered with a deadpan face.

“Um…” slightly grimacing at the visual “you know what I’m actually a vegetarian, so I think I’ll have to take a rain check on that one. Thanks for the offer though”.

Taking a moment to collect my thoughts, still slightly reeling at the crazy proposal and scared to think of what else he might have offered if I had of hung around any longer, I focussed on my immediate surrounds.

Then I spotted a barber, and I thought to myself, a haircut in Manila, perfect, and excused myself away from the local gun club street rep and stepped through the door, as he walked off disappointed.

When I travel one of the coolest things is getting my haircut in different places. Women get manicures and pedicures and real haircuts, but men, and especially Hip Hop men, we go to the barber.

There weren’t many barbers out in Docker River and I may as well hit San Fran looking fresh so it was a serendipitous moment. The barber looked at me a bit as if he had seen a ghost but covered it well and asked me to wait while he finished the guy he was working on, who was also staring at me, but broke into a big smile. I smiled back, picked up a girly mag and sat down.

Across the lane from the barber was a little church and it was in full effect. About thirty people in the congregation singing the praises of the lord in a mix of Tagalog and biblical English while the house band thrashed away on a cheap drum set and a Casio keyboard. Now, to my surprise and contrary to all my previous experiences, I couldn’t help but smile a little when, listening to them, I realised that not all Filipinos can sing after all.

The barber ushered his last client out and with a pronounced casualness asked me to sit. He was a professional, took his time, didn’t chat and proceeded to give me a very smooth “short back and sides”. With people walking by giving me a double take and little kids faces popping out from the back of the shop, smiling, toothlessly at me, I knew I would soon be on the plane to the home of the best Hip Hop DJ’s in the world, the Filipino massive known as the Invisible Scratch Pickles. Qbert, Appolo, Shortkut, guys like Vin Roc all hailed from the Philippines but now called San Francisco home and as long as my plane didn’t break down again, I’d be there in the next 12 hrs.