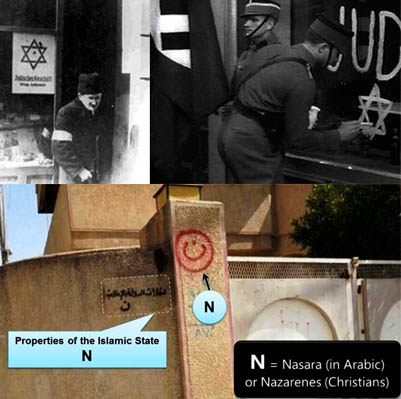 What is happening in the Middle East and Africa to Christians – rapes, beheadings, hangings, crucifixions, being driven from their ancestral homes and looted of all their worldly belongings…even churches have not been spared…is truly heart breaking.  The world appears indifferent to the continuing slaughter. There is a frightening silence from ‘Christian’ countries that borders  on the criminal. It is the Jews that have taken up the cause of the Christians for they are aware of what happens when a religious community is persecuted by a State : they faced gas chambers in the last century.

The Nazis drew the Star of David on all Jewish homes, which were then confiscated by the State. While the Islamic State is painting the sign ‘N’ which means Nasara in Arabic or Nazerenes (Christians) on all Christian homes and businesses. This is followed by a statement that the confiscated properties belong to the Islamic State.

——Ronald S. Lauder, President of the World Jewish Congress, in a recent op-ed bluntly asks, “Why is the world silent while Christians are being slaughtered in the Middle East and Africa?”

“In Europe and in the United States, we have witnessed demonstrations over the tragic deaths of Palestinians who have been used as human shields by Hamas, the terrorist organization that controls Gaza,” wrote Lauder in his piece published in The New York Times. “The United Nations has held inquiries and focuses its anger on Israel for defending itself against that same terrorist organization. But the barbarous slaughter of thousands upon thousands of Christians is met with relative indifference.”

Lauder leads the World Jewish Congress, which is an international organization that represents Jewish communities and organizations in 100 countries around the world.

Good people must join together and stop this revolting wave of violence. It’s not as if we are powerless. I write this as a citizen of the strongest military power on earth. I write this as a Jewish leader who cares about my Christian brothers and sisters. (The New York Times).—— 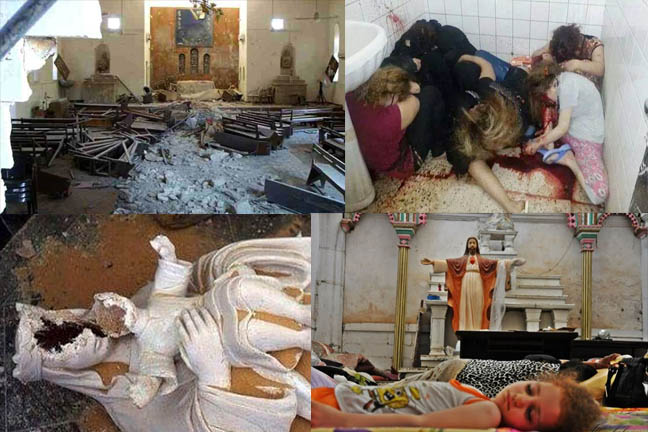 The 2000 year old Christian community in Mosul has been decimated. Not one poor soul remains while churches have either  been destroyed or converted to mosques.  Christians in other parts of the Middle East continue to hounded like animals, beaten and killed for their faith.

In parts  of Africa there appears  to be a insidious campaign to exterminate Christians.

How will this end?

And will anyone stand up for the Christians?

Read Also : Beheading and crucifixion of Christians by Islamists in Iraq