It was my first full day in Lisbon when I tripped on the sidewalk and went flying headlong onto (and into) the pavement. I had caught the toe-end of my Tevas on a bit of upended gravel. Three people immediately rushed to my aid, and a crowd gathered, peering in with concerned expressions. I had not felt off-balance or lacked the requisite spring in the step that everyone else had. And yet, it wasn’t as if I had not fallen before. Less than a year ago I slipped on the winter steps out back and with my feet in the air landed on my back. For a moment I feared I might have broken my back, but there was no pain.

So I slowly stood, careful to hold onto the rail and got back on my feet. I had done the very same thing a few years before when living in New York with my daughter. That was another snowy day, and the steps were slippery. My daughter shrieked as I took my first steps down to the street and instead clattered all the way down the flight, landing on the door to Canal Street. Again, nothing amiss, except for a few bruises, but I could tell it was horrifying to have witnessed.

Lisbon was fair and sunny. There was a slight breeze off the river. People were in good spirits and on the move in two directions in packs, couples, and alone. All of a sudden, I found myself a stone in the stream, with human eddies around me. It was as if my sprawling outline might later be chalked. So I got up, nothing broken, though I noticed that my hand was bleeding. I’d sheared the skin off the top of my little finger. Three people dashed to a nearby pharmacy and came back with bandages.

I was mostly embarrassed, but grateful for the help. Unfortunately, I never caught their names, as I would have written them my thanks. The suddenness of the fall did have the effect of making me shy at once about climbing the cobblestone hills, for which Lisbon is infamous—especially the inevitable climbs down. I also thought: here’s a picture of a 73-year old man, an American poet, toppled on the sidewalk. Not a good look. Strangely, I had the sensation of being pushed or launched in the split second before my body clattered with the street. I later realized this was a come-uppance against the expectation that I could keep up with the rush of the crowd. The late poet and art critic Peter Schjeldahl had written, “We exist in the middle of a rush so constant that it resembles stillness.”

I have thought a lot about steadiness, about balance and poise, and about the ever-ready threat of vertigo. Although I was an athlete when young and felt vigorous and strong most of my life, I had become aware of how aspirational the vertical can be in a human. Most of us don’t think about it. In fact, to think about it is to shift into self-consciousness. I used to remind my students about that moment the cartoon coyote chases the road runner over the cliff. It is only when he realizes he is over the void that he plummets into a puff on the canyon floor. That plunge is always satisfying too, schadenfreude at its most innocent. My high school football coach—my first philosopher—used to say, “When you’re running a play, don’t think! If you have to think you’re going to get knocked down.”

For a poet, reminders about the dangers of self-consciousness are always to the good. Auden, for whom self-awareness and self-inspection were not even to be thought in the same sentence, spells out the consequences in images that are all the more real for being surreal. He famously claimed,

The glacier knocks in the cupboard,
The desert sighs in the bed,
And the crack in the tea-cup opens
A lane to the land of the dead.

It’s the last of the three images that gets my attention. The domestic daintiness of the teacup, the shared lane connecting persons, although they may otherwise be forever remote. At the same time, the image is bookended by “the crack” and “the dead,” as if to underscore the fact that no life here below can escape the teacup’s grim dispatch. Behind crack is also the sound of the word, its sudden announcement. As portents go, this is official. Should we be paranoid? He thinks so.

Back in the 1990s, I was in Rome and climbed Trajan’s tower. The claustrophobia that grips some who ascend the stone steps was nothing to me, but stepping out on the ledge, vertigo immediately seized my senses. I wrote about the experience in a poem called “The Apartment”:

…I was reminded
of my vertigo stepping out from the top
of Trajan’s Tower in Rome years ago.
The guardrail stopped at knee-level,
and the tower floor itself did not exceed
three-feet wide. At your back, granite;
out beyond the eyes: air’s abyss. Now,
a convenience store occupied street level,
but the air was a void all the same.
A sculptor, on commission, carved the spiral
of the Emperor’s conquests among the Etruscans,
the Dacians, and the Goths—like all killing
utterly repetitious in the ringing iron,
the screams of horses, the helmeted bodies.
At some point, the eyes following the spiral
could no longer take in the scope of victory,
but the vanishing point was no less bloody
than the start, the swords no less blunt.
By contrast, the top floor I saw—tilted
and tiled—had only a rail and no place
out from the the window to stand upon. Already
windows on either side were indistinguishable
from skylights. Who stood at that rail
saw boulevards stretching all the way
to the inhospitable suburbs. Just so,
saints were said to emerge from their cells
and pause, before going forth out of the spirit,
in their rope belts, into the stony forests.

It will not come as a surprise to learn that, as one of the fallen, I am drawn to aerialists, climbers and ledge-walkers, which is to say, to people for whom maintaining balance (or losing it), is paramount. It has something to do with sheer daring too. I was about to write derring-do. I was (and am) mesmerized by Philippe Petit, Nik Wallenda, and Alex Honnold and watched their feats closely. We are not like the angels, who float and drift, indifferent to the possibility that many of the mind-forged manacles spring from the compass of Isaac Newton.

In Paradiso, Dante maintains that angels thrive in a different environment and that flying is the “true country.” An old friend of mine from graduate school, a gifted fiction writer, had fallen from a ladder and injured his arm. He began to withdraw socially after that, according to a mutual friend. This friend added that, in the larger picture, some people are not a good fit for life and that he was overcome to discover that his feelings of unfitness contained a truth he couldn’t evade. I was sad to hear this news, as I had known him for his quick wit. I now began to understand it as a distancing device, disarming engagement while appearing to feign approval. It’s not only one’s ability to stay afloat that registers us, but to stay afoot too.

I wrote about the possibility of falling in another poem, “Ten-Second Delay”:

That Blake etching, the angel hovering
over a skeleton, holding a trumpet.
We were unable to hear its note,
or watch the skeleton stir, at first daintily,
then the winching pull, accompanied
by sighs and the clicking of bones as it
sits upright….

It’s said TV cameras enforced
a ten-second delay so that
if Wallenda fell, the cameras could
cut away, and have nothing revealed,
although a body plunging through
space travels like the note
from the angel’s instrument.

Icarus fell. Again, in Auden’s retelling (via Breugel), when the fall comes, “everything turns away.” When I fell, I wasn’t reaching for the utmost I had just wanted to get down the street in a timely manner. This brings me to poetic ambition (or the lack of it), which many think is involved with reaching and falling, or, if you prefer, a poet’s orientation toward what is at first beyond reach—for the sun, if you will. It is, after all, like standing upright and moving with purpose, even when that purpose shrinks to aimlessness, a kind of presumption against the rest of matter.

A character in Nabokov is self-involved enough that when he forgets his keys and has to return to his apartment, he doesn’t turn in the street. Instead, the street rotates “180° relative to his person.” The genius of poetry is the presumption of figure to ground. Plato saw this and evicted the poets from his Republic. He also alleged they told lies along the way. Auden was once asked why he gave up teaching, and he replied that he was tired of “telling lies to little boys.” Shakespeare, who offers the greatest expression of this presumption, also left open the possibility that it was all—that is, ambition, including standing upright, in any of its manifestations—just a dream, a febrile stirring about which we could feel at least, well, wistful.

The Romantic philosopher Hegel argued that evolving “knowledge,” meaning self-awareness, would make the universe know itself. That was its point. It would have created a Good, a necessary Good. You might say it was God’s way of finding a companion—His evolved creation—so that he wouldn’t feel lonely, His version of high lonesome, that His creation was just a way of styling the void, in which something and nothing signal a distinction without a difference. Poetry has an analogous effect: it is designed to live after we have fallen. I will consider it practice. I didn’t trip and fall so much as the ground rose up to meet me. 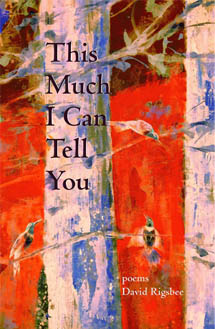 David Rigsbee is an American poet, critic and translator who has an immense body of published work behind him. Not Alone in my Dancing – Essays and Reviews (2016), This Much I Can Tell You  ( 2017), School of the Americas (2012) and The Pilot House (2011), all published by Black Lawrence Press, are but a sample. Forthcoming in the fall is his complete translation of Dante’s Paradiso from Salmon Poetry, and Watchman in the Knife Factory:  New and Selected Poems in 2023 from Black Lawrence Press.

One Reply to “David Rigsbee – Falling in Lisbon
Guest editorial”