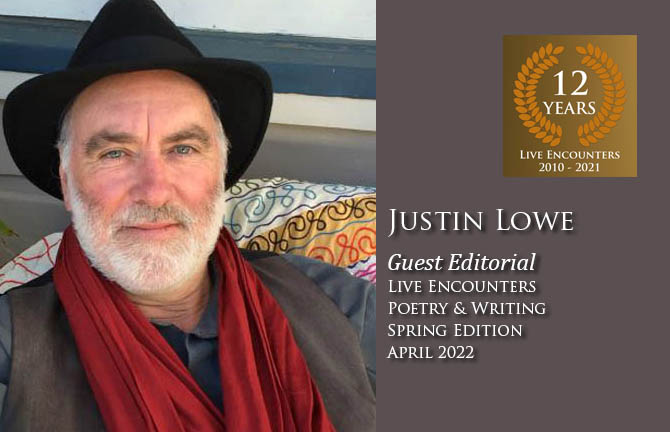 An Emporium of Letters, guest editorial by Justin Lowe.

When the indomitable Mark Ulyseas invited me to pen this editorial, I was honoured of course, but also uncharacteristically flummoxed.

All around me the world was coming off the rails. My studio was flooded after once-in-a-century rains that were a repeat of last year and the year before. There were not one, not two, but three great big elephants in the room that I felt obliged to gloss over if I ever I had a hope of keeping within the word limit. I’m chatty, people. To point them all out, one by one, would glaze too many otherwise bright eyes, so I will defer to Reuters.

As someone recently observed in a Sydney editorial, we in the West have grown somewhat inured of big H history in our thirty years of gaudy triumphalism, the Fukuyama conviction that there would be no more vast pestilences, no more vast wars. Well those days are gone, it would seem, heralded in from an Antipodean perspective when most of the east coast of my country caught fire. There has been almost no good news since. Thus, my quandary. Art, afterall, thrives on the conviction that life will prevail.

As the Ukrainian-born American poet Ilya Kaminsky puts it so succinctly in his prescient masterpiece, “Deaf Republic”:

What is a man?
A quiet between two bombardments.
(“Question”)

The art of poetry, Ilya’s and my particular art, has never shied away from the dark corners of the human experience. That was its manifesto from the start. No art worth the name does shy away, of course. But poetry is very much the elegiac art form, called on for millennia to celebrate life in its myriad possibilities in the shadow of an indelible incomprehensible passing.

Poetry is, in this and many other ways, an inherently defiant art form. Calling authority to account all the way to Death itself. I know I’m a little biased, but surely only a poet could have flipped the bird at Death like Pardoner Johnny Donne: “Death, be not proud.

I would like to take this opportunity to mark the passing of the Australian poet Jordie Albiston. Death be not proud.

I would like to take this opportunity to mark the passing of the Australian cricketer Rodney Marsh. Death be not proud.

I would like to take this opportunity to mark the passing of the Australian cricketer Shane Warne. Death be not proud.

I would like to take this opportunity to mark the passing of so many innocent Ukrainians and the standing of Russia in the international community. Death be not proud.

Which brings me to life.

Live Encounters, this phenomenon of which I am so proud to be a part, this vast archive of art, poetry and prose, can appear a little daunting at first. I know it did to me. In that way it is such a child of the internet, that daunting, somewhat perplexing, myriad of voices right there at our fingertips.

True to my nature, I just worked my mouse like a dart hurled at a dartboard after one too many pints. And I have yet to be disappointed. In a world apparently committed to a dark narrow path bristling with grim certainties, here is an emporium of colour and vibrant intellect that is so vital for the development of the good life and the good global citizen.

Yes, there is bustle and noise and a bumping of elbows, but the bustle is more Festival than Bazaar. There is a large bright vision here, not just a grasping of sleeves. May Live Encounters continue proud and strong for many years yet in this perplexing beautiful world.

The following poems are from a work-in-progress titled ‘A Lockdown Almanac’.

oh, where haven’t I done it?

with their stories whose moral has always eluded me

that night we ate modishly late in a little cafe
bunched tight as battery hens in the refracted light
knees touching knees awkwardly under the black lacquered table
grinning shyly as we shovelled our opera cake
bed beckoned and the comparative certainties of sleep
but the maid’s bitch was whelping right beneath us
a full moon being the extent of any explanation or apology
we were not much liked, we sensed already
perhaps because not fluent enough
to make our gratitude sound sincere to the servants
or because we needed everything repeated like royalty

by the second night the pitiful howling had stopped
and the board games grew very long and the rules difficult to follow
I discovered a walk through the woods to a tiny lake
with a small pier and a boat moored by a frayed rope
one of the puppies tried to follow me but lost its way in the dark
and I spent an hour trying to track its whimpering to a thorny hedge
licking its wounds amongst the foxglove and briars
its quivering stilled by my voice and my hot hands
not accustomed to lifting something so light and trusting
I sat in the long grass and let it lick my face all over
its smooth little tongue licking away my tears
before I could even begin to explain them.
by our third night no-one had yet asked my opinion on anything.

on our fourth night there was a sharp disagreement in the drawing room
but the insults flew too thick and fast for me to catch them
a quick glance at the scoring sheet suggested Bridge
which, if it hasn’t already provoked a war, will soon enough
the servants were nowhere to be seen
but the puppies bounded in as though released from somewhere
and the mood soon softened and brandies were poured
and finally someone turned to me with a serious question
about the Polish King and the Periodic Table
and I answered them to vague approval and reluctant delight
my accent, I think, this strange tremor in my voice
and a servant came to collect the puppies
which were let go with great reluctance