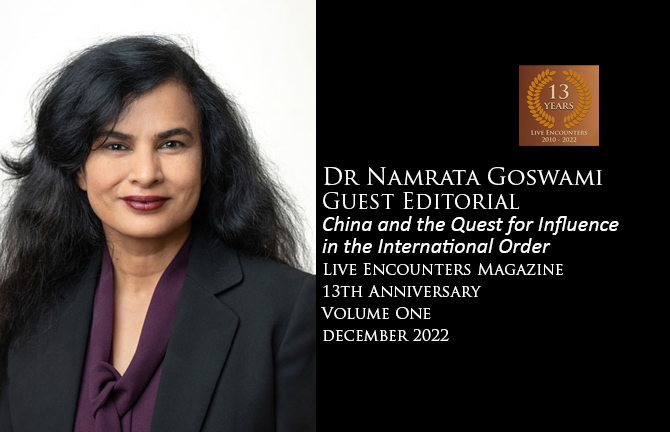 China and the Quest for Influence in the International Order,
Guest editorial by Dr Namrata Goswami.

In his two-hour speech to the 20th National Congress of the Communist Party of China (CPC), President Xi Jinping not only solidified for himself a unique third five-year term as General Secretary of the CPC, [1] Chairman of the Central Military Commission and President of the People’s Republic of China, but also asserted China’s focus on national rejuvenation and civilizational greatness. Xi stated and I quote:

We have developed well-conceived and complete strategic plans for advancing the cause of the Party and the country in the new era. We have put forward the Chinese Dream of the great rejuvenation of the Chinese nation and proposed promoting national rejuvenation through a Chinese path to modernization. We have made well-coordinated efforts to advance our great struggle, our great project, our great cause, and our great dream. [2]

This Xi stated would be accomplished through the leadership of the CPC as supreme guide of China’s great future and by focusing on developing key strategic technologies like Artificial Intelligence, Space, Robotics and Quantum computing. For Xi, the purpose of China’s development was clear; to increase its influence in the international order and to shape that order in a manner beneficial to China so that it can develop norms, rules of the road and strategic technologies that sustain this ‘party meritocracy’ (read authoritarian politics) as the CPC puts it.

Great Powers care about international order. At the level of international order, what matters is how a country can utilize its economic power to persuade other states that are not Great Powers, but major or middle powers to align with its agendas and interests. To accomplish this, Great Powers utilize a combination of factors, to include economic largess (offering loans, gifts, infrastructure development) to countries that need it in return for support to their leadership in the international system, through military power projection, through demonstration of technologies and an ability to draw global talent through innovative domestic policies and an open trading system. Space technologies play a critical role in showcasing those futuristic capabilities and establish a nation’s greatness.

Consequently, in his speech. Xi highlighted China’s need to demonstrate spacepower, through its Moon and Mars missions, satellite internet, and deep space exploration.[3] This was drastically different in ambition and scope from the recently released U.S. national security strategy in which space was not identified as a core priority area, and the strategic conversation on space in a single paragraph was about space traffic management, and space governance and there was zero mention of U.S. grand ambitions in space. The arms control discourse limited to Earth orbital ambitions still had center stage in U.S. space policy.[4]

Given the context of Xi’s speech and assumption of power for a third consecutive term, here are some of the factors that China is focused on to demonstrate its Great Power status in the 21st century: –

Millions tuned in, to watch the CPC and the 20th Party Congress and Xi’s speech. This itself showcased China’s soft power; that the international order cared about what China is aiming for, what its strategic priorities are, and what is the message the CPC is sending to the world and to its domestic audience. Concepts like China as a responsible power, Covid zero, contribution to climate progress, peaceful power and with growing influence, economic development, a little soul churning as to the limits of growth, all make China an attractive alternative to the West, for a diverse international audience. Words like China is a democracy (party democracy) were thrown into the official English translation of President Xi Jinping’s speech, with China knowing full well that this challenges the Western concept of representative electoral democracy as the only legitimate democratic political model out there.

The Issue of Taiwan and Assertion of Great Power

Asia especially East Asia is projected as China’s strategic neighborhood with Taiwan as the key core territory of China, no matter what the Taiwanese want or support. Xi asserted that it’s the ‘One China Principle’, “a core belief stating that Taiwan is an inalienable part of China with the PRC serving as the sole legitimate government of that China.”[5] Xi asserted that China will respond to any move Taiwan would make towards independence, including with the use of military force if needed. Towards this end, China has been steadily building its military capacity to include its navy, missile deployment and space support infrastructure as well as counter space weapons to deter and destroy U.S. space-based military Command and Control structures.

Recently, Chinese military writings have included Starlink, the satellite constellation put up by SpaceX as an adversary military force multiplier that must be destroyed if a future conflict erupts over Taiwan between the U.S. and China. [6]

The strategic partnership between China and Russia is viewed by China under Xi Jinping’s leadership as a key cornerstone of China’s great power status, by extension meaning a major power like Russia joining in and supporting Chinese leadership adds legitimacy to China.[7] This partnership has not changed despite Russia’s military operation in Ukraine. China views Russia as having legitimate concerns in Ukraine to include a growing NATO and U.S. influence in the region which China views as detrimental to its assertion of Great Power status in that region.

China and the Global South

China views itself as part of the ‘global South’ and legitimizes its Great Power status as part of the Asian century argument and the ‘West versus the rest,’ narrative whereas Western hegemony of ideas, institutions, education, trade, military power are showcased as having a negative influence on the world.[8] The need for alternative international relations theory, non-Western international relations, institutions and trading blocs is something China champions as part of that narrative. The fact that Asian countries like Japan, South Korea, Philippines, India views China’s growing assertion of its power as detrimental to their sense of security is brushed aside as irrelevant.

Chinese foreign policy and great power status have a realist orientation with culture put into that grand narrative. Assertions of civilizational wisdom never fails to make it to CPC leaders’ speeches, of course, directed by Marxism with Chinese characteristics. In this major narrative, hard power, to include possession of nuclear weapons, military conventional power, space power, cyber power, and a focus on developing key strategic technologies of the future like enhanced AI, robotics, space presence on the Moon and Mars, and dominating the Sea Lines of Communication (SLOCs) are part of the Chinese grand strategic narrative.

In the Chinese worldview, the U.S. leadership in the international order is not legitimate. Specifically, the U.S. has no business in maintaining a presence in China’s strategic neighborhood especially East Asia with military presence in Japan, South Korea, Diego Garcia, Guam. This was possible as per the Chinese narrative because China was weak after 1945. A return to great power glory (a tributary system of sorts) will correct this historical humiliation.

The more power China accumulates, the less the U.S. will have the ability to respond to China reshaping its strategic neighborhood and the Asian regional order. This Chinese perspective was validated after a lackluster U.S. response to China reshaping the South China Sea islands and declaring an Air Defense Identification Zone (ADIZ) in the East China Seas. Hard Chinese power worked to limit the U.S. capacity to respond with the U.S. restricted to symbolic U.S based academic and policy discourses on how China needs to be shamed into following the rules of international order and norms of behavior, and how China should be punished internationally through such words of shaming.

The Chinese counter arguments were classic and effective: whose norms and whose rules of behavior are we talking about. Western hegemony and a self-styled righteousness of assuming universal norms which are mostly Western in spirit, origin and dissemination. We may not like these Chinese counter arguments for their clever strategic duplicity but that is the Chinese strategic play we need to acquaint ourselves with.

The international order of the 21st century will be determined by that nation that expresses and establishes a long-term plan driven by purpose, strategic confidence and clarity. China aspires to fulfil that role by offering long term plans for the global economy, outer space and strategic technologies, Whether China will achieve these goals will depend on its ability to meet these aspirations, the resilience of its internal political system, and the buy in by other states in the international system led by Chinese leadership. The race for international influence is on.

5.U.S. Taiwan Business Council, “The United States ‘One China Policy’ is NOT the same as the PRC ‘One China Principle”, January 01, 2022, https://www.us-taiwan.org/resources/faq-the-united-states-one-china-policy-is-not-the-same-as-the-prc-one-china-principle/ (Accessed October 23, 2022).

7. Joint Statement of the Russian Federation and the People’s Republic of China on the International Relations Entering a New Era and the Global Sustainable Development, February 04, 2022, http://en.kremlin.ru/supplement/5770 (Accessed October 23, 2022).

Dr. Namrata Goswami is an independent scholar on space policy and Great Power Politics. She is Faculty Associate at the Thunderbird School of Global Management, Arizona State University for their Executive Master of Global Management, Space Leadership course. She is a consultant for Space Fund Intelligence and a guest lecturer at the seminar on “India Today: Economics, Politics, Innovation & Sustainability”, Emory University.

She was subject matter expert in international affairs with Futures Laboratory, Alabama. She worked as Research Fellow at MP-Institute for Defence Studies and Analyses, New Delhi; a visiting Fellow at Peace Research Institute, Oslo, Norway; La Trobe University, Melbourne, Australia; University of Heidelberg, Germany; Jennings-Randolph Senior Fellow, United States Institute of Peace; and was a Fulbright Senior Fellowship Awardee. She was awarded the Minerva grant by Office of the U.S. Secretary of Defense to study great power competition in outer space. In April 2019, Dr. Goswami testified before the U.S-China Economic and Security Review Commission on China’s space program.

Her co-authored book, Scramble for the Skies: The Great Power Competition to Control the Resources of Outer Space was published 2020 by Lexington Press; Rowman and Littlefield. Her book on The Naga Ethnic Movement for a Separate Homeland was published in 2020 by Oxford University Press.  She was invited in November 2019 to share about her life and her work at a Tedx event held at the Rosa Parks Museum, Montgomery, Alabama. She is currently working on a book on China’s Grand Strategy and Notions of Territoriality.