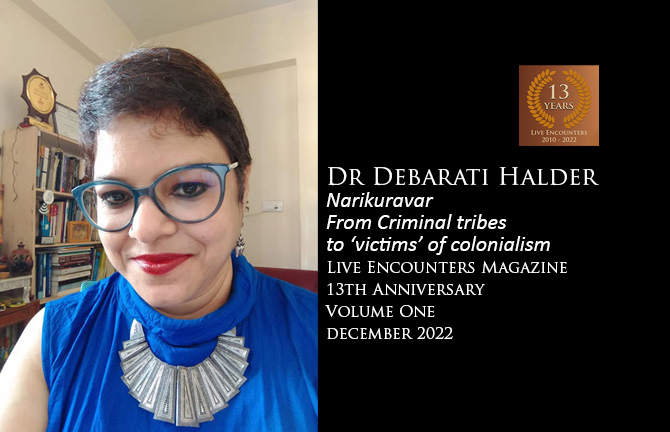 From Criminal tribes to ‘victims’ of colonialism –
De-Stigmatizing of Narikuravar community of Tamil Nadu
through Right of Children to Free and Compulsory Education Act, 2009:
A socio-legal analysis by Dr Debarati Halder.

This short essay argues that proper implementation of Right of Children to Free and Compulsory Education Act, 2009 may de-stigmatize the tribal community. Such implementation may necessarily need awareness building among the Narikuravar community about the need for basic school education for the children and awareness building among general individuals about the equality rights of the Narikuravar community so that the members of the community may not face social exclusion.

The Directive Principles of State policy of the Constitution of India through Articles 41 (right to work, education and to public assistance in certain cases), 45(provision for early childhood care and education to children below the age of six years), and 46 (Promotion of education and economic interests of SC, ST, and other weaker sections) had made the State responsible for creating policies for ensuring right to equality and education for all including socio-economically backward classes of India.

It was not before 2009 that a part of this noble set of principles was made into reality by creating special fundamental rights for free and compulsory education for all children through Right of Children to Free and Compulsory Education Act, 2009 (RTE Act). This helped several children from under-privileged communities and socio-economically backward regions to get standard education, which in turn helped them to be self-sufficient to a certain extent (Bhattacharjee, 2019).[1]

It has been considered as an established fact that education may lead an individual to a positive life. It may make him/her understand basic societal values, rights and wrongs (Wigley, S. and Akkoyunlu-Wigley, A., 2006).[2] Access to education makes individuals or groups or communities from under-privileged sectors empowered. Right to education coupled with right to life and right to equal opportunities may also ensure reformation of individuals who may had to choose criminal activities for survival.

This essay, argues that even though the Right of Children to Free and Compulsory Education Act, 2009 has made it possible for all children including children from socio-economically backward classes to access basic education, it could not fully erase the stigma of criminalizing the Narikuravar community as a whole even though not everyone of the community may be accused or convicted for offences.

Due to partial lockdowns, shortage of time and lack of time, the author could not conduct any empirical study to understand the actual scenario in the contemporary time. Hence the author had relied upon secondary sources including academic articles and news reports from authentic sources.

The colonial rulers in Asia were hugely influenced by Born Criminal Theory of Lombroso, an eminent Italian criminologist. This theory suggests that certain groups of criminals may be distinguished by unique physical characteristics and personality traits (Wolfgang,1961).[6] Resultant the British rulers in Indian subcontinent identified certain groups of people who did not fall in the category of ‘civilized natives’ that will be obeying them and their commands which were mostly brutal for the ‘ruled’.

These groups included several tribal communities who successfully resisted foreign intruders in their habitats for generations. They had their own social customs and life styles which were influenced by developing technologies, but did not change drastically like their ‘civilized’ counterparts living in cities and rural areas who were regulated by colonial rules. These tribal communities also participated in mini revolts against the colonial rulers. This made the British rulers to enact Criminal Tribes Act, 1871 to permanently include members of such selected tribal communities as criminal tribes (Kapadia, 1952).[7] The members of the enlisted tribal community were considered as habitual offenders who were often accused of doing petty to heavy offences.

The Criminal Tribes Act had categorically stated that offences committed by members of these communities would be treated as non bailable offences (Kapadia, 1952).[8] Later, post-independence, the government of India delisted all such tribes and new schedules were prepared to reintegrate them in the mainstream society by listing them scheduled tribes and scheduled castes. Such listing for positive benefit of the said communities including the Narikuravar communities were made hoping that such listing may help them to come out of the stigma of being ‘criminal tribes’. But several contemporary literature would show that the members of these communities including the Narikuravar community continue to live in extremely poor and unhygienic conditions which may force them to take up certain criminal activities (Muhammed Atheeque, P.P. and Nishanthi, R., 2016; Jayachithra, J., 1992).[9]

This has significantly restricted the Narikuravar community’s access to right to education as well. The above mentioned literature would show that even though the government and non-government stakeholders have tried to provide basic education to the children of Narikuravar community, the latter suffer from social exclusion. Non-Narikuravar parents may not allow their children to interact with Narikuravar children. The latter may often be accused of petty theft even if they may not have done the same in reality.

Can The Right of Children to Free and Compulsory Education Act, 2009
remove the stigmatization?

Right of Children to Free and Compulsory Education Act, 2009 has ensured that no child remains ‘uneducated’ and every child gets basic education. But a thorough reading of the statute would show that the statute does not give any promise to job after finishing the basic education. Right to education very loosely ensures that children from socio-economically backward classes, accessing school education must also get proper nutritious meal while they are accessing free education. [10] It also expands its scopes to ensure rights against child labor including hazardous work. But there are not much data or research to show that children from Narikuravar community could get such benefits.

Researchers have shown that Narikuravar parents preferred to engage children in selling beads, safety pins, cheap jewelries at public places including bus stands and railway stations etc, rather than sending the children for schools (Balaji, C., 2018).[11] The only attracting point for going to the school may be having mid-day meal. But that may not always encourage the community to send the children to school. The adults and the children in the Narikuravar community are still seen as probable offenders.

This author had personally observed that common people may not consider to socialize with the people from Narikuravar community because of the presumption about their habits and life style. But not to forget, the government of Tamil Nadu had created Narikuravar welfare boards to provide them socio-economic assistance including assistance for educational scholarships, accidental death assistance, housing, marriage assistance, old age pension etc.[12] These welfare Boards along with government and non-government stakeholders had been trying tirelessly for the development of the Narikuravar community.

As may be seen from the above discussion, the present government policies and statutes like the Right of Children to Free and Compulsory Education Act, 2009 offer de-stigmatization of the Narikuravar community, which was once considered as a criminal tribe. The Legal Services Authorities Act, 1987 further ensured right to access justice for the socio-economically challenged members of backward, most backward and scheduled tribes and castes free of cost.

But Narikuravar community may not get full benefits of these policies, schemes and welfare statutes because they may not be receiving required education for understanding their rights or they may not be aware of their rights. The main problem centers around the issue of awareness among general people about the rights of the Narikuravar community and convincing the later to avail their rights and accept the requirements for continuing school education for their children like daily attendance, joining skill developing programs, availing the government benefits for accessing self-help groups for economic development etc.

India has seen developments in several sectors including science and technology, globalization, trade etc. But there are several groups of people who may not have received their rights because of age-old stigmatization created by colonial rulers, which gained more strength due to socio-cultural divisions in the Indian society as a whole.

Access to free and compulsory education by children of Narikuravar community must be audited by the government to understand whether the children from the said community are able to continue their education and whether they are facing any challenges in this regard. The government must also engage NGOs, public and private universities and law schools to empower the Narikuravar community to realize their basic fundamental rights. It is necessary to see whether the children from such communities are being assisted for availing higher education or vocational courses which may make them market ready. It is also necessary to create awareness in general public about the unfortunate past of the Narikuravar community which made them stigmatized as a criminal tribe.

Both the mainstream society and the Narikuravar community must trust each other to enable the later to access basic rights and improve their socio-economic status. Unless such efforts are initiated and properly funded and monitored by the government, the Narikuravar community may continue to lag behind and remain stigmatized in spite of enactment of welfare statutes and policies by the government.

11. Balaji, C., 2018. PARENTAL ATTITUDE AND CHALLENGES TOWARDS PRIMARY EDUCATION: A STUDY AMONG THE NARIKURAVA COMMUNITY IN PUDUCHERRY. Editorial Board, 7(7), p.35.

She is also the first in India to create a draft model law on prohibiting Revenge Porn in India. She is the EqualityNow Public Voices Fellowship On Advancing The Rights Of Women And Girls (https://www.equalitynow.org/news_and_insights/public-voices-fellowship-on-advancing-the-rights-of-women-and-girls/) In 2019 for her scholarly work and creating awareness on cyber crimes against women she has been awarded “Webwonderwomen Award” by Ministry of Women & Children Affairs, Government of India & Twitter and “TechNext India 2019 Best Faculty of the year” award by Computer Society of India, Mumbai Chapter. She is also the founding secretary of South Asian Society of Criminology and Victimology (SASCV)(www.SASCV.org). She is also a member of Board of trustees of international society of Therapeutic Jurisprudence(https://www.intltj.com/).