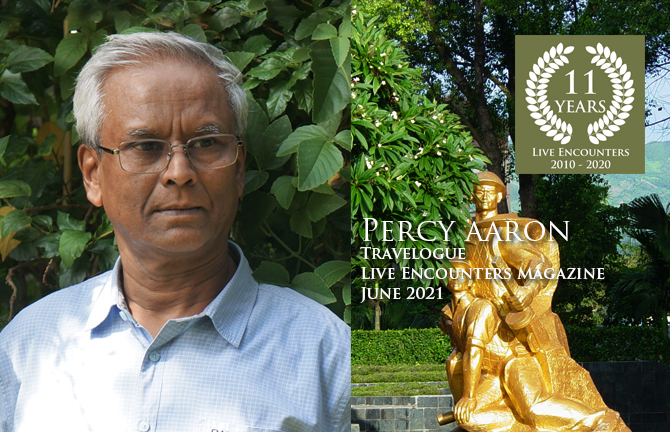 War memories and dining disasters are a plenty on a visit  in 2007 to one of Vietnam’s historic battlefields.

My throat was on fire and I grabbed the bottle of mineral water on the table, almost wrenching off the cap. As the first sips trickled down my throat, I wanted to scream ‘napalm’.

It had started the previous day.

We had spent a long, tiring day exploring the war sites of the epic battles for Điện Biên Phủ. Our stomachs were empty and our throats parched as we ascended hillocks and descended into bunkers but it seemed almost profane to think of food in a place where combatants on both sides had gone for days without food or water.

As a history buff I’m always drawn to war memorials and museums. As a pacifist I’m always appalled by the senseless waste of human life. As a thinking person I’m always angered by the fact that the most vociferous supporters of war are those who stand far removed from the arenas of conflict.

In the photographs we’d seen that day at the museum, the only people smiling were the politicians and generals, the former invariably in white suits, while the latter were in starched uniforms that had seen neither war nor work. These were the people whose sense of timing was perfect; departing before the shells came in, or the champagne ran out.

Back in our hotel I welcomed a shower and the opportunity to get rid of the dust and sweat of a sultry, sticky day. Now it was time to make up for the breakfast and lunch that we had skipped and so we set off in search of a restaurant.

We entered a number of stylishly furnished places we thought were restaurants. They were pubs that didn’t serve food! Alcohol, alcohol, alcohol. That was all on offer. We needed a cold beer but that could wait until we had something in our stomachs. Every place that we went into showed us only a drinks list. It was getting late and shops were beginning to close. We started walking faster and faster, desperate to eat. Eventually, we found to a restaurant; a real restaurant. We were so hungry that we scanned the menu before even sitting down. Everything was in Vietnamese and we couldn’t understand a thing.

David chose something but when my eyes followed his finger, I saw the word chiên. “You’re going to eat dog?” I looked at him.

“Chiên is French for dog. In Vietnam dog meat is a delicacy.” He nodded, getting my point. Vietnam had once been one of colonial France’s jewels.

Almost everything on the menu had the word chiên and we tried to make the waiter understand that we didn’t want dog meat. We opened and closed our fingers to indicate canine jaws. We pointed to chiên and shook our heads. The waiter was nonplussed and the elderly man sitting behind the cash counter came over to see what the matter was.

“Bow wow, no eat,” I shook my head vigorously from side to side. He didn’t understand, lost interest and said something to the waiter, who started switching off the lights. Most places had closed by that time but luckily we found a minimart where we bought some yoghurt and crackers and headed back to our hotel room.

By the next morning my stomach was touching my backbone. David said that he hadn’t been able to sleep because of hunger. We wanted a heavy breakfast before catching our noon flight to Ha Noi. Our guide book had recommended a restaurant for the best phở – a noodle, meat and vegetable soup – in town and we headed there. The waiters didn’t understand our order for “poh” and we wondered if the cyclo driver had brought us to the correct place. It was going to be our last meal in Điện Biên Phủ and we wanted the best. There must be another restaurant by the same name nearby we thought and walked out of the place. As we were leaving David looked up and saw in big letters the word Phở.  We called the waiter out and pointed to the word and he smiled. “Fer,” he pronounced it. “Fer,” he articulated once again, slowly and clearly.

We realised our mistake. We’d had this dish hundreds of times back in Vientiane, where we lived, and pronounced it the same way. We laughed wondering why we had pronounced it differently here.

The phở was very good, no doubt about that.

While we were eating two men at the next table took turns smoking a điếu cày – a wooden pipe that looks like a variation of a hookah. With total disregard for other diners, who didn’t seem bothered anyway, they filled the place with smoke. For non-smokers like us, Vietnam can be an exasperating experience. We watched with a mixture of annoyance and fascination.

One of the men noticed us staring and invited us to take a puff. David refused politely but I, who had never ever smoked in my life, did something crazy. I accepted the man’s offer.

I went to their table and with gestures they explained what I had to do. Very hesitantly I put my mouth to the opening and inhaled but felt nothing. They tried explaining and I took another try. Then David called from the other table saying that I had to inhale deeply, taking the smoke into my lungs.

I took a deep pull and gulped forcing the smoke down to my lungs. Then my throat caught fire. I gasped not knowing what had happened. The two men started smiling. I looked around desperately and spotted the bottle of ‘mineral’ water on the table. I grabbed it, wrenched off the cap and took a deep swig.

Almost immediately, like a fire-eater, I spat the ‘mineral water’ out over the tables and on some customers. My gullet had been napalmed. I clutched my throat and pulled at my collar. David sprang up totally confused but the others were in hysterics. The man who had invited me to smoke was clapping his hands.

Suffocating, and now in deep panic, I jumped up from the plastic chair, knocking it over. I looked around for something to pour down my throat. David shouted wanting to know what was wrong but I couldn’t say anything. I was dying and death rattles were coming from my throat.

I didn’t trust anything on the tables and rushed to the toilet. I passed through the kitchen and saw heaps of dirty soup bowls in aluminum basins. Nearby was a drum filled with water. I dipped one of the bowls into the water and gargled and spat out. I did it again and again until the burning sensation had eased. I stood there, bent over the sink till the panic started to subside. Looking at the filthy water I wondered if diarrhea was to follow the scalded throat and lungs.

When I wobbled back to the restaurant, laughter broke out again. David came up to me with the bottle of ‘mineral water’.

Much later, we arrived at the airport and checked in. I was starving but didn’t feel like any food as my throat was still sore and my stomach queasy. We were approaching security when I remembered that I had left about $200, in Lao kip, under the mattress in the hotel. Days earlier, while trekking in Laos I had fallen into the Nam Ou River. The money had been in one of the pockets of my cargo pants and I’d put it under the mattress for safety and to dry out. I was cursing myself when the policeman at security asked me if I was carrying a knife.

“No,” I replied but he asked the question again staring at the TV monitor. He said something to a grim looking policeman who lifted my hand baggage off the x-ray machine and walked to a table. Everything was unpacked, checked carefully and left on the table. My empty bag was x-rayed again. The man at the monitor beckoned to me and pointed to something showing up in the corner of the bag.

From where I was standing, I saw the queue behind getting impatient but also interested to see what was going to happen. Terrorists being apprehended can be fun to watch. David, from inside the security barrier stood looking at me. I shrugged my shoulders at him.

Officer Grimface brought the bag back to the table, gave me an unpleasant look and then started probing the area that had showed an object inside. Standing opposite him, I noticed the stitches in the lining had opened. He tore that open and pulled out a small Swiss Army knife.

My reaction must have surprised the policeman and the passengers. I recognized the knife, grabbed and read the words engraved on it, ‘Darling Percy – Yours Forever – J…’. It was a gift, I thought I’d lost years ago.

Both policemen smiled and then Grimface showed his softer side. He asked another policeman to take over and then rushed me all the way back to the check-in counter, where the knife was sealed in a see-through plastic bag and a receipt handed to me.

We smiled at each other and I pumped his hand gratefully.

Later, when we got back to Vientiane we found out that chiên in Vietnamese means ‘fried’.