Currently, K.L. Sharma is Pro-Chancellor at Jaipur National University, Jaipur and Vice-Chairman of the Institute of Development Studies (IDS, Jaipur). Prof. Sharma taught at Jawaharlal Nehru University (JNU), New Delhi for more than three decades. He was Professor of Sociology and Rector (Pro-VC) at JNU. Sharma was Vice-Chancellor at the University of Rajasthan, Jaipur and Jaipur National University, during 2003-2014. K.L. Sharma was a visiting Professor for five times at College de France, Paris, during 1991-2005. He was also a National Fellow (ICSSR) during 2014-16. In, 2002, Prof. Sharma was honoured with the Swami Pranavananda Saraswati Award by the University Grants Commission (UGC) of India. The main fields of his interest are: rural sociology, social stratification, social movements and rural-urban networks. During his long academic journey, he has published several books and research papers. Prof. Sharma’s writings are widely read by students and teachers. Prof. Sharma has lectured in several countries, including France, Germany, England, Holland, China, Brazil and some African countries. Prof. Sharma also writes for a popular Hindi newspaper on current issues concerned with education, inequality and social change. 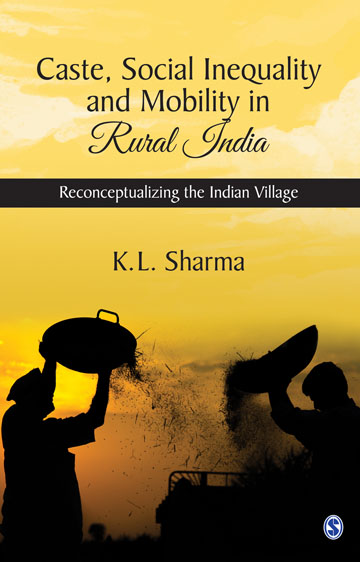 The author questions the taken for granted concepts and views about Indian village, caste system, family, rural economy and power structure. He observes that differences are found within and between villages, castes, family life, occupational pursuits, income and assets, and power structure. The author has analysed a large number of studies with a view to attempt an interdisciplinary understanding of caste, social inequality and mobility in village India. A restudy of the six villages (studied earlier by Sharma in 1965-66), and then after half a century in 2016, shows the extent and magnitude of change relating to caste, inequality and patterns of mobility.

Intra and inter-village differences clearly indicate that no single village in India is representative of the villages in a given area, district, state, and in India as a whole. As such, inter-village and country-town nexuses have always existed, though such networks have witnessed paradigmatic shifts caused by both micro and macro factors. Thus, an image of a ‘holistic’ village is an unrealistic one. The village had well-recognised social arrangements in the past with some degree of flexibility and reconciliation in inter-group relations. Even today, it has, though substantially transformed patterns of social relations, recognized by the village people. The village is not an ‘ambiguous’ social formation.

Jajmani system, caste as a system of intra and inter-caste relations, caste and village councils, inter-village networks, village economy, etc., as traditional institutions, have almost disappeared. Besides the changed mode of agriculture, non-agricultural means of income have become pronounced. In its new avtar, country-town nexus has weakened the old ties, relating to relations between individuals, families and castes/sub-castes. Though, village has become considerably a resilient entity, however, it retains its identity as a ‘community’ in terms of spatial entity, with its transformed social milieu.

Today, new ‘actors’ have entered into the village arena, who aspire for power and high status. They have acquired material assets, including land and access to non-farm income. A tiny public sector functioning has emerged by way of institutions, such as school, public health centre, statutory panchayat, cooperative society, etc. Functionaries like teacher, doctor, nurse, patwari, gramsevak, panch and sarpanch are at the center-stage of the Indian village.

Despite, such a new face of the village, over the years, merchants, markets, moneylending and migration have changed, as their traditional base has shrunk, resulting in a ‘push’ factor for those who have left the village. Education and networks have played an effective role in this context. The impact of such a change has added to a sort of ‘modernity’, a sense of urban life, by continued contacts of the out-migrants with their village and family members. This has also impacted urban life as well. One can see a ‘village’ in the town, and a ‘town’ in the village. This is, in fact, a renewed country-town nexus. Thus, country-town nexus is multifaceted and multidimensional, both, historically and contextually. Hence, reconceptualization of Indian village is inevitably unavoidable.

One can note the presence of a new man and a new society with wide-ranging ramifications at the level of family, jati, and village organization. A new pattern of status and power has emerged in place of family and caste-based determination of social relations in terms of high and low positions. A new form of reproduction of status and power is in process, uprooting the age-old socio-cultural moorings.

The book contains fifteen chapters, arranged in five parts, besides Foreword by Prof. Dipankar Gupta, and Introduction and Conclusion. As mentioned above, a specific feature of the book is a double synchronic study of the six villages in Rajasthan, narrating the changing village scene over a period of half a century.

It is evident that a village is a mirror of differentiation and mobility in terms of caste, class, power, networks, education, employment and somewhat more egalitarian relations. However, unevenness in the distributive shares implies dominance of the new middle class, and a new social formation in making. As such, social inequality has acquired a new form. The present village scene can be characterized as follows:

Based on a comprehensive analysis of the studies on village India, it can be stated that the Indian village is not a monolith. It has both cooperation and conflict, selfhood and collective identity, unity and factionatism, hierarchy and individualism/segmentation. All these aspects can be observed in varying permutations and combinations in different parts of rural India. Even country-town nexus is of differing degrees.

One can see an individual and his/her family at the centre of social and occupational mobility. As such, rural India is engaged in reinterpretation of criteria of status and power. The caste-based norms and practices are being questioned. Assertion for equality and dignity is quite often visible by those who were at the bottom of social hierarchy in the past. Despite such a wave of social change, ‘democratic dynasties’ persist by way of continuity of the same set of people in positions of power and authority, though following electoral process. Differential access to resources, such as quality education, gainful employment and participation in decision-making, is the main factor in the persistence of inequality and its reproduction.

Finally, a word about the caste system may be uttered. Caste as a system has collapsed. Its systemic ethos has disappeared. Obviously, ‘caste’ is appropriated by vested interests for specific ends-in-view. Caste is discretionary in terms of its use, misuse, abuse and non-use. ‘Caste’ in its non-systemic avatar is being used in terms of favours, discriminations, mobilizations and seeking of power. This shows emergence of new parameters of status and power. However, there is no uniform system of stratification and change throughout India.